xxxxxThe massive royal palace-monastery of El Escorial was built by Philip II as a burial place for all Spanish sovereigns. Situated 26 miles north-west of Madrid it consists of an impressive church and royal palace within a vast walled enclosure, four storeys in height and with towers at each corner. Begun in 1563 and finished in 1584, its thick, grey, granite walls give it a grim appearance, but its severe, majestic style was clearly meant to express the grandeur of imperial Spain. Emperor Charles V was the first to be buried there. 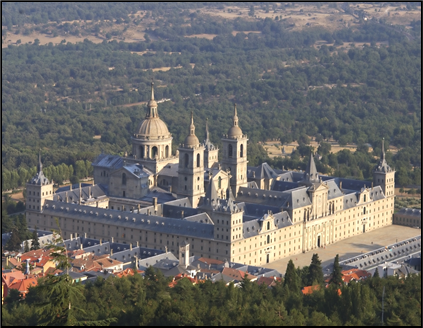 xxxxxThe royal monastery of El Escorial is one of the largest religious establishments in the world, covering an area about 206 by 160 metres. It was built by Philip II to provide a burial place for all Spanish sovereigns. First to be buried there was his father, Emperor Charles V, and since that time all but three monarchs have been interred within its walls. Workxon this ambitious project - which included a royal palace - was accomplished by two Spanish architects. Juan Bautista de Toledo began the planning in 1563, and, after his death four years later, the construction was completed by Juan de Herrera (1530-1597). The site chosen was in the Guadarrama Mountains some 26 miles north-west of Madrid.

xxxxxBautista was responsible for the overall plan of the monastery, and this consisted of a huge rectangle with the church in the centre, the monks' living quarters in the north, and the royal palace and administrative offices to the south. Herrera made amendments to these original plans, adding an extension to the west facade, and improving the design of the church, which, when completed, was an impressive building with two bell towers and a large central dome. The complex, four storeys in height and with towers at each corner, was completed in 1584. A college and library were added later.

xxxxxAlthough both architects had worked or lived in Italy, the influence of the High Renaissance is somewhat limited, due to what came to be known as the "Herreran style". Clearly restricted by the king's desire to avoid ornamentation, this style produced a monumental building with thick, grey granite walls, virtually devoid of decoration and providing an exterior which was both grim and forbidding. In stark contrast to Charles V's luxurious, ornate palace within the Alhambra, this imposing building was not without its critics, but this severe, majestic style was doubtless meant to express the imperial Spain of the day. As such, it was to prevail in the design of churches and palaces over the next fifty years or so, and to find its way to the New World. Today, the Escorial is regarded as one of the finest architectural monuments in Europe. 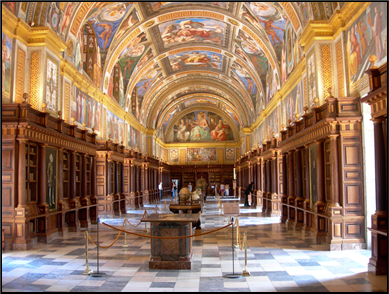 xxxxxIncidentally, the Greek-born Spanish artist El Greco was anxious to provide frescoes for the Escorial. He sent paintings to Philip II in support of his application, but he was turned down. Among those who did decorate the interior were the Italian artists Antonio Campi, Luca Giordano and Federico Zuccaro, who painted the altarpieces for the monastery.