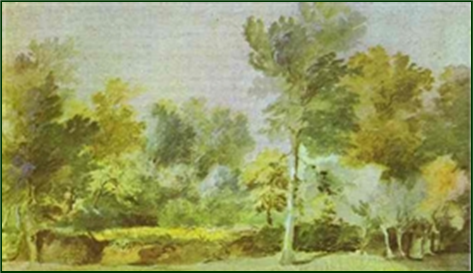 xxxxxSome 500 of his portraits have survived, together with many oil sketches and drawings. His watercolour landscapes, now in the British Museum, captured the very essence of the English countryside, their light touch and simplicity being in marked contrast to his work in oils. Illustrated here is A Meadow, Surrounded by Trees, 1635.

xxxxxVan Dyck, though strong looking in appearance, had a delicate constitution, and in his last years the constant pressure of work took a toll on his general health. Nonetheless, in 1640 he married Mary Ruthven, one of the Queen's ladies-in-waiting, and his little daughter, Justiniana, was born just eight days before his death in December of the following year. He was buried in St. Paul's Cathedral.

xxxxxIncidentally, with the aid of the three combined portraits of Charles I, completed in 1635 and sent to Rome the following year, Bernini competed the bust of the king, but it perished in a fire at Whitehall Palace in 1697, and a copy had to be made from an existing cast. We are told that, while working on the bust, the great Italian sculptor was struck by the king's melancholy air and his sense of foreboding! Van Dyck also produced three portraits of the Queen, Henrietta Maria, for a Bernini bust, but by the time they were completed the civil war was under way and they were never sent to Rome. 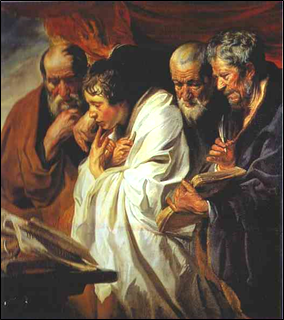 xxxxxJacob Jordaens (1593-1678) was another Flemish artist who, like Van Dyck, was greatly influenced by Rubens. He worked in his studio and assisted him in a number of commissions. His exuberant colouring and natural flesh tones clearly show the influence of his master, but his style was less refined than that of Rubens, as can be seen in his down-to-earth portrayal of The Royal Toast of 1640. The realism he captures, however, (as in his Meleager and Atalanta) owes a great deal to Caravaggio, whose technique he gleaned through the works of local artists. Most of his painting was on a large scale, and included altarpieces, portraits and mythological themes, but, unlike Rubens and Van Dyck, whose work served the courtly needs of crown and aristocracy, he also painted vivacious scenes of town and peasant life.

xxxxxHe was born in Antwerp and trained under Adam van Noort. Like Van Dyck, he was a member of the city's art guild and head of a flourishing workshop. After working for Rubens, his fame spread further afield and, following the death of his former master in 1640, he could hardly cope with the number of commissions he received, despite his large team of students.

xxxxxAmong his major works are his early painting The Four Evangelists (illustrated above), his Triumph of Bacchus, and his Christ Driving the Money Changers from the Temple - illustrated below together with his The King Drinks. In 1652 he joined a team of artists decorating the Huis ten Bosch (House in the Wood), a royal country palace near The Hague, and painted a series of colourful and dramatic murals.

xxxxxAnother Flemish artist at this time who worked with and was influenced by Rubens was Jacob Jordaens (1593-1678). However, the realism he captures owes much to Caravaggio. His work included large altarpieces, portraits and mythological themes, together with vivacious scenes of peasant life. Among his major works are The Four Evangelists, Triumph of Bacchus, and Christ Driving the Money Changers from the Temple.

xxxxxThe Flemish artist Anthony van Dyck was one of the outstanding artists of the 17th century. He was an assistant to Peter Paul Rubens and, adopting his master’s vibrant colours and lush style, earned a reputation for his portraiture and religious canvases. While in Italy, studying Titian, Tintoretto and Veronese, he gained fame for his flattering portraits of the aristocracy, and the exquisite rendering of their rich attire. His long association with England began in 1632, where he became principal painter to Charles I and painted him and his family many times. Among his major religious works are his moving Christ Crowned with Thorns, Madonna of the Rosary, and The Rest on the Flight into Egypt. Notable among his mythological studies is his Rindaldo and Armida. Apart from members of Europe’s royal families and aristocracy, his portraits, in excess of 500, included scholars, churchmen and local artists. 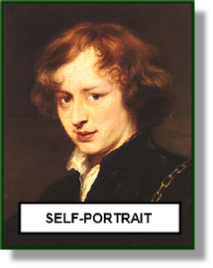 xxxxxAnthony van Dyck, one of the outstanding artists of the 17th century, was born in Antwerp of a wealthy family. Such was his precocious talent that he opened his own studio at the age of 16, and was accepted as a member of the Antwerp guild of painters two years later. He then spent two formative years (1618-20) as an assistant-cum-collaborator to the great artist Peter Paul Rubens.  Here he adopted his master's vibrant colours and lush style. Indeed his work, some of which was often taken for that of his master, later earned him a reputation almost second to none for portraiture and religious canvases. A notable work of this early period was his moving Christ Crowned with Thorns. 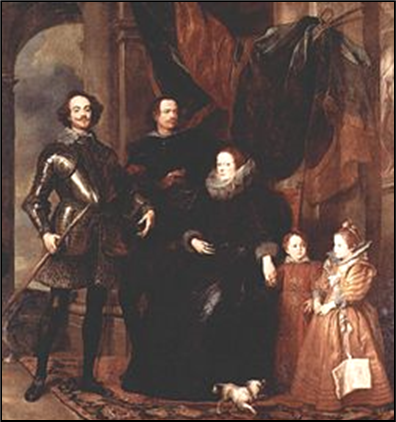 xxxxxInvited by the Earl of Arundel, he then paid a short visit of three months to the court of James I of England, before spending six years in Italy, travelling, studying and painting. He was particularly impressed with the work of the Venetians - notably Titian, Tintoretto and Veronese - and he developed an interest in baroque religious painting, but it was during these years in Italy - especially in Genoa - that he first gained an enviable reputation for his portraiture of the aristocracy. Toning down the strong colours associated with the Flemish school, and developing his own style, he captured the very essence of the "upper classes", whether it be the proud, haughty stance of the statesman, the courtier or the soldier on prancing steed, the slender, elegant ladies in flowing gowns, or their composed and dignified offspring. Above all, in the rendering of their rich attire, be it intricate lacework or the tone and texture of velvet, satin and silk, his talent has not been surpassed. Examples of such work include his proud Portrait of Elena Grimaldi, and The Lomellini Family (here illustrated). And it was while in Italy that he produced one of his most accomplished religious paintings, Madonna of the Rosary, for the Oratorio del Rosario in Palermo, Sicily. 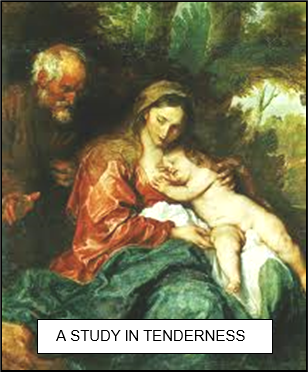 xxxxxOn returning to his native city in 1627, he set up a flourishing studio and proved a worthy rival to his master, Rubens. The next six years saw the production of some of his finest work. Such was the number of commissions he received, that he was obliged to take on a large team of assistants. Among his major works during this period were his etchings of well-known contemporaries and his distinctive religious works, finest amongst which were his Crucified Christ with St. Dominic and St. Catherine of Sienna, and his tender rendering of The Rest on the Flight into Egypt (illustrated). In portraiture, his subjects included not only members of the royal houses of Europe, but also scholars, churchmen, and local artists and their patrons. He was appointed court painter to the widowed Archduchess Isabella in 1630, and spent the following  two  years painting portraits of her and her entourage.

xxxxxHis long association with England began in 1632.  Charles I had bought Van Dyck's dramatic mythological painting Rindaldo and Armida in 1629, and had admired this work so much that he eventually persuaded him to settle in London as "principalle Paynter in ordinary of their Majesties". Here he very quickly gained national renown for his portraits of the royal family and the landed gentry. Admired above all were his refined, elegant style, and the air of regal dignity which he instilled into his portraiture. His masterpiece, a portrait of the king in hunting dress (now in the Louvre, Paris) was painted in 1635, and this was followed by one of the king on horseback, completed in 1636, and a delightful painting of the five royal children the following year (illustrated below). 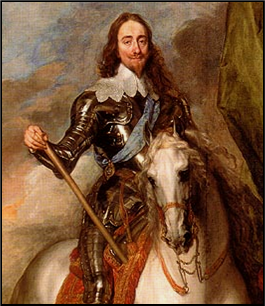 xxxxxCharles I on Horseback, executed in 1638 and now in the National Gallery, London, is generally recognised as the equestrian portrait that best succeeds in artfully conveying that sense of majesty and regal authority that the king sought to project. Also successful in this respect, however, is Charles I on Horseback with Seigneur de St. Antoine (his riding master). This work (detail illustrated) completed in 1633 and now in the Royal Collection, adds triumph to majesty, an aspect which, in fact, he failed to achieve. Other paintings of the king, less concerned with image, were brilliant in their detailed study of his features and the revelation of his character, and none more so than the three portraits in one (illustrated below), produced to assist the Italian sculptor Bernini in the making of a marble bust. 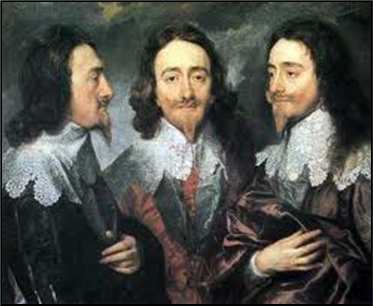 xxxxxIt is not clear why Van Dyke chose to leave his thriving studio in Antwerp, but he might well have been aware of the king's generous plans. He was given a house in Blackfriars - constantly visited by the king and the nobility of the day -, a country residence in Eltham Castle, Kent, and an annual pension of £200. In July 1632 he was knighted and the following year given the gift of a gold chain worth over £100. In return, Van Dyke painted some 30 large portraits of the king and his family, as well as working non-stop on countless commissions from courtiers and nobility. Nevertheless, he made repeated trips back to Antwerp, and went on a visit to Paris just six months before his death.

XxxxxHis work in England had a profound effect upon English portrait artists far into the 18th century, and founded the school to which, amongst others, both Joshua Reynolds and Thomas Gainsborough were to belong. And the two German portrait painters who came to work in England, Peter Lely and Godfrey Kneller, also drew inspiration from his work.

Illustrated here are The Lamentation of Christ, An Apostle, and Charles I’s five eldest children 1637.