xxxxxAlbrecht Durer was a skilled 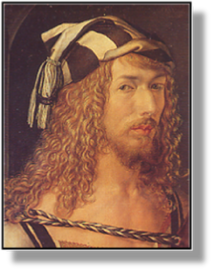 German artist who excelled in many media, but is best known today for his superb engravings and woodcuts. A leading figure in the German Renaissance, he produced a large number of altarpieces, portraits, landscapes and drawings, all of them remarkable for their keenly-observed detail. His fifteen woodcuts for the Apocalypse of St. John, completed in book form in 1498, and his copperplate engravings, such as the Knight, Death and the Devil of 1513, and his Melancholia, produced a year later, are among his masterpieces. By their complexity and richness of tone, they took the graphic arts of woodcuts and engraving to the height of perfection. The illustration is part of a self portrait, painted in 1498.

xxxxxAs a boy he was apprenticed to his father, a Hungarian goldsmith who had settled in Nuremberg, and then to Michael Wolgemut, a local woodcut designer who was then engaged in providing illustrations for the Nuremberg Chronicle. At the age of twenty, after working as an engraver in Colmar, Basel and Strasbourg, he travelled throughout Europe, studying the variety of art techniques employed in various countries. It was during a stay in Venice, beginning in 1505, that he met Bellini, copied the works of Mantegna, and studied the science of perspective. His direct contact with the new artistic ideas of the Renaissance had a marked influence on his future work. He was court painter to Maximilian I for a number of years, and during that time provided marginal drawings for the Emperor’s prayer book. Then, following a visit to Antwerp in 1520, where he was warmly received, he was employed for a time by Maximilian’s successor, Charles V.

xxxxxSome of his work, such as his illustrations for The Apocalypse, are clearly Gothic in spirit, but his woodcut Life of the Virgin, produced after his second visit to Italy, shows the influence of Bellini and the sense of space and serenity which one associates with Renaissance art. Earlier works which deserve special mention are his engravings The Fortune and Adam and Eve, both executed in the early 1500s, and the Great Passion and the Little Passion, a woodcut series which was produced over twelve years. Exquisite also are his simple drawings - notably the portrait of his mother - and the close, detailed watercolour sketches he made of such diverse subjects as a crab, a hare and a clump of grass. Also in watercolour was a series of dramatic landscapes he made while returning across the Alps after his first visit to Venice. Examples of his graphic work are given below. 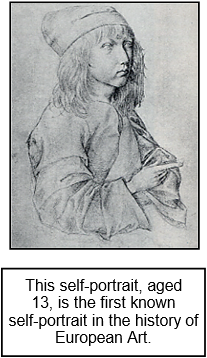 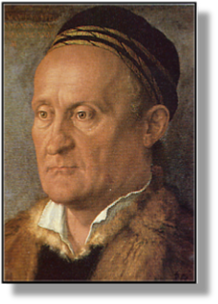 elements of Northern art - notably the precision of line and mode of dress - with the vibrant colours and classical settings of Italian art. The Adoration of the Magi, (reminiscent of Leonardo da Vinci’s treatment of this subject), The Feast of the Rose Garlands (later damaged), The Adoration of the Trinity, and the Four Apostles, a brilliant work in two panels which he presented to the city of Nuremberg, are amongst his masterpieces in this medium. And he excelled, too, in portraiture. He painted a number of impressive self-portraits - including one when he was just 13 - as well as many of his patrons and friends. In this genre in particular, his work improved markedly over the years. The portrait of Jacob Muffel, (illustrated here), is a fine example of the quality he achieved towards the end of his life.

xxxxxBecause of his visits to Italy - and Venice in particular - Durer succeeded in fusing the gothic tradition of his homeland with the new artistic qualities of the Italian Renaissance. This, together with 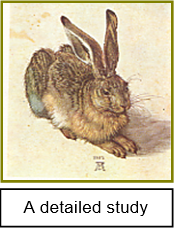 the high quality of his work, his huge output in a variety of media, his acute observation of nature, and his interest in geometric composition, were the major factors which made him the most outstanding artist of the German Renaissance. As such he had a profound influence on the sixteenth century artists of the Lowlands as well as on those of his own country. And he played a part, too, in raising the status of the artist in the eyes of the public. His series of self-portraits depict him as a confident, cultured, fashionably dressed young man who mixed on equal terms with the notables of his day, including Melanchthon, Luther and Erasmus. He died in 1528 from the effects of a fever he caught in Zeeland some seven years earlier, and was buried in his beloved Nuremberg.

xxxxxThe German artist Albrecht Durer is best known for his superb engravings and woodcuts, such as the fifteen woodcuts for the Apocalypse of St. John, his woodcut series entitled the Great and Little Passion, and his copperplate engraving Knight, Death and the Devil, produced in 1513. These and all his works are remarkable for their keenly-observed detail. Exquisite also are his simple drawings and watercolour sketches. During his travels in Europe he met Bellini and Mantegna in Venice, and was much influenced by their work, especially in his paintings like The Adoration of the Magi and the Four Apostles. He excelled too in portraiture, and produced one of the first self-portraits. Court painter to Maximilian I and his successor Charles V for a number of years, he took the graphic arts to the height of their perfection.

xxxxxIncidentally, while working at Basel and Strasbourg, Durer made illustrations for a number of books, including some for Sebastian Brant’s Ship of Fools. His own written works include a treatise on the art of fortifications, produced in 1527, and Four Books on Human Proportions, published posthumously in 1528. 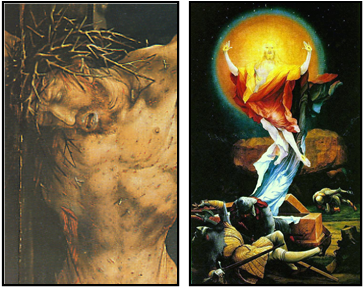 during the coronation of Charles V, Durer met one of his talented countrymen, the painter Matthias Grünewald (1475-1528). Unlike Durer, his output was mostly medieval in spirit, as can be seen in his early work, The Mocking of Christ, and in his masterpiece, his altarpiece at the Antonite monastery at Isenheim in southern Alsace. Made up of nine large panels depicting, among other subjects, the Crucifixion, Entombment, Annunciation and Resurrection, it uses light and shade to good effect and has a strong emotional impact, the suffering of a gruesome Christ, for example, contrasting with the light and radiance surrounding His resurrection (here illustrated).

xxxxxGrünewald was painter to both the Archbishop and Elector of Mainz, and in his later years was responsible for a series of paintings for the cathedral of Halle. He was known to his contemporaries, including Durer, as Matthias von Aschaffenburg, this being the town where his work as an artist is first recorded.

xxxxxAnother German artist who, along with Durer and Cranach (the man who painted some famous portraits of Luther) was one of the leaders of the German Renaissance, was Albrecht Altdorfer of Regensburg, Bavaria (c1480-1538). His engraving in copper and wood was second only to that of Durer, his reputation based mainly on nine etched landscapes and a collection of some 40 engravings under the title The Fall and Redemption of Man. He is also remembered for his Battle of Alexander at Issus, completed in 1529, a huge scene full of movement and drama. And, again like Durer, he was responsible for some of the first true landscapes, depicting the forests and mountains of the Austrian Alps that he had admired during a journey down the Danube.

xxxxxShown here are four engravings from his The Fall and Redemption of Man: The Garden of Eden, The Flight into Egypt, The Last Supper, and The Crucifixion.