xxxxxThe painter Duccio was the founder of the Sienese school of painting. He worked in the Byzantine style, but was one of the first to show a marked degree of sensitivity in the portrayal of his subjects, a feeling for artistic composition, and the wider use of rich colours. This marks him out as a precursor of the Renaissance. These qualities can be seen at their best in his masterpiece the Maestà, a huge altarpiece for Siena cathedral, completed in 1311. Other major works attributed to him are the Recellai Madonna (another vast altarpiece), St. John preaching, the Madonna of the Franciscans and two triptychs (three panels hinged vertically), The Holy Virgin and Child (in the National Gallery London), and The Crucifixion (in Buckingham Palace, London). 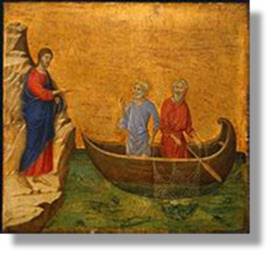 xxxxxBorn in Siena in about 1255, Duccio became the founder of the Sienese school of painting. Unlike his contemporaries Cimabue and Giotto, Duccio’s work is in the Byzantine style but based upon the later, more refined period of this tradition. Hence he shows a subtle use of rich colour, a sensitive quality in his drawing, and an artistic sense of composition, all of which combine to give a strong emotional dimension to his work. He was a precursor of the Renaissance and, as such, his influence was profound, despite the fact that he illustrated his skill within a declining art form. Illustrated here is his The Calling of the Apostles Peter and Paul.

xxxxxHis masterpiece is the Maestà, completed in 1311, a huge altarpiece made for the main altar in Siena cathedral. Measuring some 14 by 7 feet, it is painted on both sides. The front of the panel depicts the Madonna seated on a throne and surrounded by a host of angels, saints and apostles - some thirty figures in all. The Virgin Mary is clearly Byzantine in style, and much detail is in traditional gold, but the face and figure are sensitively drawn, and the whole panel is full of life and warmth (illustrated below). The reverse shows no less than twenty-six scenes from the life of Christ, including His passion, death and resurrection. Shown below is the Last Supper. 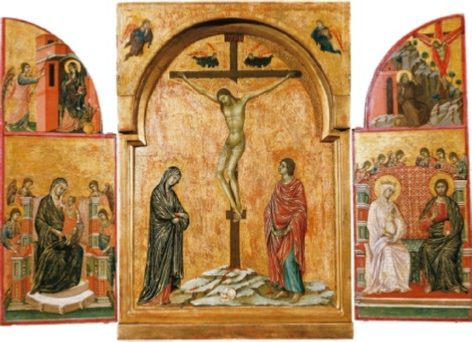 xxxxxDuccio’s other major work is the Recellai Madonna, begun about 1285 and once thought to have been painted by Cimabue. Another huge altarpiece, this shows the Madonna and Child enthroned. Angels float overhead, holding the throne aloft against a background of Byzantine gold. It was commissioned for the Santa Maria Novella in Florence and is now on display in the Uffizi Gallery there. Among other works attributed to him are St. John Preaching (Budapest), The Virgin and Angels (Perugia and Bern), The Madonna of the Franciscans (Siena), and two triptychs (i.e. three panels hinged vertically together) depicting The Holy Virgin and Child (National Gallery, London) and The Crucifixion (Buckingham Palace, London), (here illustrated).

xxxxxIncidentally, the Maestà was painted to celebrate a military victory which saved Siena from invasion. When the painting was completed, the whole town turned out, and, with trumpets sounding and drums banging, it was carried in procession through the streets, from Duccio’s workshop to the high altar in the cathedral. It is unlikely that any other work of art has been given so warm a welcome! The painted panel can now be seen in the cathedral’s museum.

xxxxxThe Italian painter Simone Martini (c1280-1344) was probably one of Duccio’s students. His altarpieces included Virgin and Child and his own Maestà, but he also painted many frescoes. His works are noted for their delicacy and perspective, seen to good effect in his series of frescoes depicting the life of St. Martin of Tours, painted while he was at Assisi for the lower church of St. Francis. He also spent some time at the papal court in Avignon. He was one of the first artists to move away from religious subjects, as can be seen in his equestrian portrait of the general of the Sienese republic, a type of portrait which became very popular during the Renaissance.

xxxxxWorthy of mention here is the Italian painter Simone Martini (c1280-1344). A member of the Sienese school, he was probably a student of Duccio in his formative years, but his work showed a great deal of originality, notably in the delicacy of his interpretation and the illustration of perspective. He painted many frescoes, but he also produced a number of altarpieces, including his Virgin and Child, completed in 1320 for the Church of Saint Catherine in Pisa.

xxxxxOne of his earliest works, completed in 1315, was his Maestà, a fresco some 40 ft. wide, painted on an end wall of the council chamber in Siena’s Palazzo Pubblico. Depicting the enthroned Madonna and Child and a host of angels and saints, it is clearly a free interpretation of Duccio’s masterpiece, and one in which an abstract approach has been replaced by a realistic one (illustrated left above). Later, probably in the mid-1320s, Martini spent some time in Assisi. Here, his elegant style and mastery of perspective can be seen to good effect in a series of frescoes illustrating scenes from the life of St. Martin of Tours, painted in the saint's chapel in the lower church of San Francesco.

xxxxxMartini spent the last years of his life at the papal court in Avignon, having been invited there by Pope Benedict XII. While there he painted frescoes in the cathedral and the papal palace, and it is probably during this period that he painted his Annunciation (illustrated right above), considered by some to be his masterpiece. He died at Avignon in 1344. 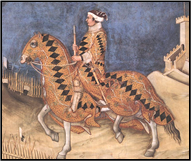 xxxxxIncidentally, he was one of the first artists of this period to move away from religious subjects. In 1328 he painted an equestrian portrait of the general of the Sienese republic (here illustrated). Not only was this an unusual subject to paint, but it also started a trend for this type of portrait amongst the artists of the Renaissance.