xxxxxFor some years the French had been nibbling away at the borders of Gascony, Edward’s possession in south-west France. In 1294 the French king, Philip IV, having been given the Duchy for a limited period, refused to give it up. Three years later Edward managed to take an army to France, but he was then faced with a revolt of his barons in Flanders, and a rising by William Wallace in Scotland. He was forced to return home, and it was ten years before a settlement was reached whereby the duchy - reduced in size - was held by Edward as a fief of the French crown. However, a marriage was agreed between the future Edward II and Philip's daughter Isabella, and this brought a fairly long period of peace between the two nations. 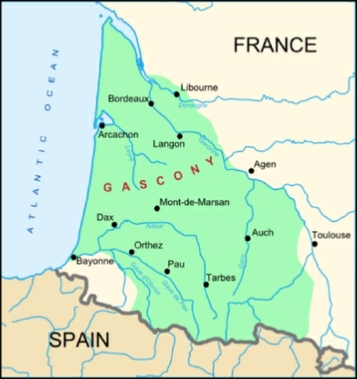 xxxxxDespite his preoccupation with the conquest of both Wales and Scotland, Edward was for ever mindful of his land in south-west France, the Duchy of Gascony. Consisting of a large part of a wider area known as the Province of Guyenne, he visited it on returning from his crusade - at the very start of his reign - and he spent a number of years there in the late 1280s. It was evident that for some time, however, Philip IV of France, and indeed, his father, Philip III, before him, had been nibbling away at the Gascon borders and taking every opportunity to undermine Edward's authority there.

xxxxxMatters came to a head in 1294. During the previous year Philip IV had negotiated with Edward’s brother, Edmund, the Earl of Lancaster, concerning the future of Gascony, and had persuaded him to 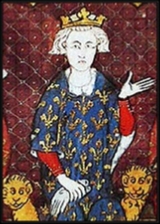 surrender the duchy over to French authority for a limited period. Once in his hands, however, Philip (illustrated) refused to return the land, ostensibly because of a dispute he claimed was going on between English and French seamen. Troubles at home, both in Wales and Scotland, delayed any action on the part of Edward. When at last in 1297 he managed to take an army to France, he was faced with a revolt of his barons in Flanders - making reduced taxation a condition of their support - and then forced to return home to deal with a major rising in Scotland, led by William Wallace.

xxxxxThe war, which proved a costly affair for both monarchs, dragged on for close on ten years and was eventually settled by negotiation. Gascony was returned to Edward as a fief of the French crown, but the territory was somewhat reduced in size. However, by a peace treaty reached in 1303 a marriage was agreed between the future Edward II of England and Philip’s daughter Isabella, and this arrangement resulted in an unusually long period of peace between the two kingdoms.