xxxxxThe Devonian Francis Drake went to sea as a young lad, and learnt his seamanship aboard small coastal vessels. A relative of the navigator John Hawkins, in 1566 he sailed to the West Indies where he was lucky to survive an attack by a Spanish squadron. He returned in 1572, and carried out a successful plundering expedition against Spanish shipping and colonies. It was in 1577 that he began his epic voyage and became the first Englishman to circumnavigate the globe. He passed through the Magellan Straits, crossed the Pacific and Indian Oceans, and returned via the Cape of Good Hope, plundering all the way. He arrived in England in 1580 with an immense fortune in precious stones and spices, but only one of his five vessels, his own ship the Golden Hind, completed the voyage. He was knighted on his return, and served as a Member of Parliament in the 1580s.Then, after yet another voyage to the Spanish Main and a daring attack upon the Spanish fleet in Cadiz harbour, he took a leading part in the defeat of the Spanish Armada in 1588. But later expeditions proved less successful and it was during one of these, an attack on Puerto Rico, that both he and Hawkins died of a fever. 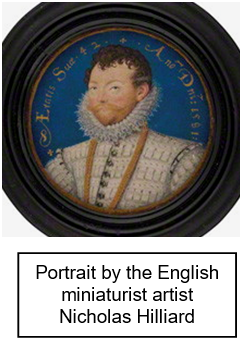 xxxxxThe buccaneer and explorer Francis Drake, the most famous seaman of the Elizabethan age, was born near Tavistock in Devon. His father was a tenant farmer and a Protestant lay-preacher. In 1549 a Catholic uprising forced the family to move to Kent, and it was at Chatham on the south bank of the Thames estuary that Drake first came into close contact with sailing ships. He went to sea as a young lad of thirteen, and learnt his seamanship on one of the small coastal vessels that braved the rough waters of the North Sea. It was a rigorous but highly effective apprenticeship.

xxxxxIn 1566, as a relative of the celebrated navigator John Hawkins, he took part in an expedition to the West Indies and, the following year, was given the chance of commanding his own ship, The Judith. The aim of the voyage was a slave-trading mission to the Caribbean, but it all went horribly wrong. After selling their slaves, the English force was attacked by a Spanish squadron in the harbour of Vera Cruz as it was preparing to return home, and only two ships managed to escape, those commanded by Drake and Hawkins. In 1572, determined on revenge, and having gained the approval of the Queen, he conducted a highly successful plundering expedition against Spanish shipping and possessions in the Caribbean. He captured the port of Nombre de Dios on the Panama Isthmus, and pillaged the town of Portobello before returning with a considerable fortune - some £20,000 - and a determination to sail in the Pacific Ocean, sighted during the voyage and then the preserve of the Spanish. 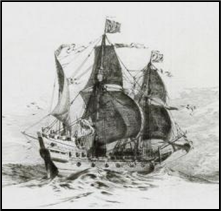 xxxxxAfter serving for three years in Ireland, helping to put down the rebellion of James Fitzgerald, he was personally commissioned by the Queen to attack the Spanish colonies which had been established along the Pacific coast of the New World. He was well suited for the task. His expedition set out from Plymouth in December 1577, made up of five ships and about 160 men. Having crossed the Atlantic, two of the supply vessels were abandoned in the estuary of the Rio de la Plata in South America. The remaining three managed to pass through the Straits of Magellan, a voyage of sixteen days, but were then blown off course by a sudden storm. One ship was lost and another returned to England, believing that the expedition had been abandoned. Only Drake's flagship, the Golden Hind, survived, but there was no thought of turning back. 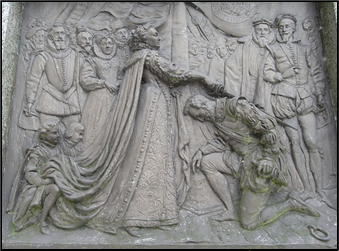 xxxxxDrake now sailed north along the western seaboard of America, attacking Spanish merchantmen and plundering Valparaiso and other Spanish ports along the way. The treasure he amassed in gold, silver and precious stones was immense. Reaching California, he put in for repairs in a sheltered inlet just north of present-day San Francisco - now called Drake's Bay - and, by means of a brass plaque, claimed the land for England under the name New Albion! Then In July 1579 he crossed the Pacific, reaching the Philippines and the Moluccas islands before stopping at the Indonesian islands of Celebes and Java. He rounded the Cape of Good Hope in June 1580, and reached England in the September, laden down with spices and Spanish treasure valued at £1.5 million. Needless to say, as the first Englishman to circumnavigate the globe, and the first captain ever to sail his own ship around the world, he returned to a triumphant reception. In April 1581, the Queen knighted him aboard the Golden Hind at Deptford, in London (illustrated), and he was made mayor of the city of Plymouth the same year. Later, in 1584 and 1585 he served as a member of Parliament.

xxxxxIn 1585, on the orders of his Queen, he was off again to attack Spanish settlements in the West Indies. With a fleet of 25 ships, he first raided Vigo in Spain and then crossed the Atlantic to plunder Cartagena and Santo Domingo. The following year he destroyed St. Augustine in present-day Florida, a city founded by the Spanish in 1565. The effect of these exploits had a devastating effect upon Spanish wealth and prestige, and played no small part in persuading Philip II of the need to subdue the English. It is said that he feared Drake. He certainly had good cause to do so.

xxxxxDrake's second claim to fame, of course, is the part he played in the defeat of the Spanish Armada. Even before the Spanish attack of 1588, Drake had, as he put it, "singed the King of Spain's beard" in April 1587 by his daring attack on the Spanish invasion fleet assembled in Cadiz harbour. On that occasion his fleet of 23 ships destroyed some 10,000 tons of shipping and supplies, and put back 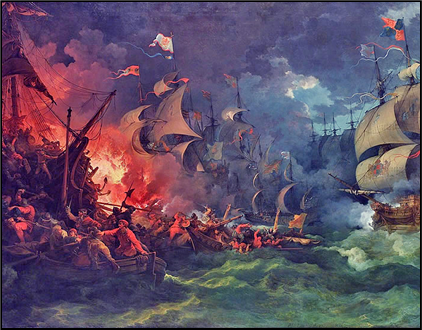 the threat of invasion for a year. When the Spanish invasion fleet did arrive off the southern coast of England, popular history would have us believe that, after finishing his game of bowls on Plymouth Hoe, he led the English attack against the Armada, possibly single-handed! As we have seen, Admiral Howard was in charge of the English fleet. Nevertheless, Drake was Vice admiral in the Revenge and his verve and daring played a vital role in the running battle up the Channel and, even more so, in the attack upon the Spanish fleet off the coast of Calais, where his idea to use fire ships proved such a tactical success. It is hardly surprising that Drake was the one to return to a hero's welcome. Few seamen have achieved such fame and popularity.

xxxxxUnfortunately, Drake's later voyages never met with the same success. In 1589 he led an attack upon the few remaining ships of the Spanish Armada but achieved little. Then, together with Sir John Norris, he led a large expedition of 150 ships and 18,000 troops to Portugal in an attempt to place Don Antonio on the Portuguese throne. They managed to destroy Corunna, but failed to take Lisbon, and the expedition had to be abandoned when sickness broke out among the troops.

xxxxxIn 1595, together with Hawkins, Drake sailed from Plymouth on his last expedition to the Spanish Main. The fleet of 27 ships took the town of Puerto Rico, but failed to gain control of the harbour. Hawkins died of a fever during this action and, because of serious sickness aboard many of the vessels, it was decided to return home. It was while sailing off the town of Puerto Bello (modern Portobello) in January 1596 that Drake died, also of a fever. It is perhaps fitting that this great English seafarer was buried at sea, in the waters where he had achieved so much success and notoriety.

xxxxxIncidentally, as one would expect, many poems have been written concerning the exploits of Sir Francis Drake. Three must suffice. Inx1598 The Spanish poet and playwright Lope de Vega, who served in the Armada, wrote Dragontea, a verse history of Drake's last voyage and death; and the English poet Sir Henry Newbolt (1862-1938) produced Drake's Drum in a collection of ballads published in 1897 under the title Admirals All. The second verse reads:

Drake he was a Devon man, an' ruled the Devon seas,

(Capten, art tha sleepin' there below?),

Rovin' tho' his death fell, he went wi' heart at ease,

"Take my drum to England, hang et by the shore,

An' drum them up the channel as we drummed them long ago.

xxxxxAnd an anonymous poet wrote of his death at sea:

The waves became his winding sheet; the waters were his tomb;

But for his fame, the ocean sea was not sufficient room. ……

xxxxx…… Though regarded as a hero by his fellow countrymen - and understandably so - the Spanish regarded him as a common pirate. They named him El Draque (the Dragon), and Philip II put a price on his head of some 20,000 ducats, about £8 million in today’s money! And apart from his attacks on Spanish shipping, Drake was also involved in atrocities against the Irish, and played a part in the slave trade alongside his cousin John Hawkins.