xxxxxThe Scottish novelist Arthur Conan Doyle trained as a doctor but, inspired by the works of a number of adventure writers, especially those of Sir Walter Scott, Edgar Allan Poe, and Robert Louis Stevenson, he quickly gained fame as a story teller. His well known creation, the famous detective Sherlock Holmes, along with his good-natured assistant Dr. Watson, first appeared in his novel A Study in Scarlet in 1887, and over the years these two characters appeared in no less than four novels and 56 short stories. In addition, Conan Doyle wrote stories of mystery, historical novels, poetry and science fiction, and took an active part in current events, openly criticising the Congo Free State, and fervently supporting the British role in the Second Anglo-Boer War. His works included the historical romance The White Company, the boxing story Rodney Stone, Tales of Terror and Mystery, and works of science fiction such as The Lost World, The Poison Belt and The Land of Mists. In his later years he became interested in spiritualism and wrote a number of books on the subject, including The New Revelation and The History of Spiritualism. After the First World War he produced a six volume history of The British Campaign in France and Flanders. 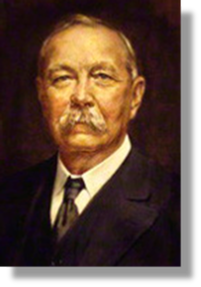 xxxxxArthur Conan Doyle, the creator of the world famous sleuth Sherlock Holmes and his worthy assistant Doctor Watson, was born in Edinburgh and educated in the city’s university. He qualified as a physician in 1881 and after a short spell as a ship’s doctor, visiting the Arctic and West Africa, he set up a practice in Southsea, then a suburb of Portsmouth. Fortunately for him, as it so happened, he had very few patients, and over the next eight years he had plenty of time to turn his hand to writing. Inspired especially by the works of Sir Walter Scott, Edgar Allan Poe, and Robert Louis Stevenson, it was the start of a career which was to produce a vast number of works, including stories of mystery, historical novels, science fiction, poetry and a deal of non fiction. He was knighted in 1902.

xxxxxIt was in 1887 that he published A Study in Scarlet, a mystery novel which introduced the famous Sherlock Holmes and his good natured but bumbling assistant Dr. Watson. From then on both appeared in a number of subsequent detective stories, including The Sign of Four in 1890 and The Final Problem three years later. The character Sherlock Holmes was partly modelled on his former lecturer at Edinburgh Infirmary, the surgeon and criminal psychologist Dr Joseph Bell, a man noted for his powers of deduction and observation. The resemblance was noticed by a number of his friends and acquaintances. Robert Louis Stevenson, for example, writing from his home in the South Seas, noted the similarity between Holmes and his “old friend Joe Bell”. 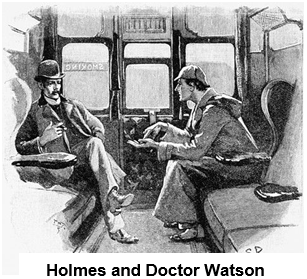 xxxxxIn 1890 Conan Doyle spent a year in Vienna taking a course in ophthalmology, the study of medical and surgical eye problems. On his return he set himself up as an ophthalmologist in London but, once again, he met with little success. Indeed, in his biography he later confessed that not a single patient came to call! He again turned to writing and in 1891, being anxious to put his mind to historical novels, he decided to kill off Sherlock Holmes. In his novel The Final Problem, published in 1893, he had his popular detective hero and his arch enemy Professor Moriarty plunge to their deaths in the Reichenbach Falls in Switzerland, but such was the public outcry that followed that he was obliged to bring him back from the dead! After taking part in the Second Anglo-Boer War - where he served for a few months as a volunteer doctor in a field hospital in Bloemfontein - Conan Doyle wrote The Hound of the Baskervilles in 190l, one of his most popular mystery tales, and brought Sherlock Holmes back to life. Eventually Holmes and Dr. Watson were to feature in four novels and a total of 56 short stories. 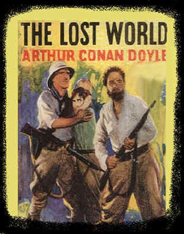 xxxxxOther novels included his historical romance The White Company, a boxing story entitled Rodney Stone, The Exploits and Adventures of Brigadier Gerard, a set of amusing stories, and The Lost World, a fantasy adventure which introduced a new character, the truculent Professor Challenger. This dominating figure later featured in other science fiction stories, including The Poison Belt and The Land of Mist. His Tales of Terror and Mystery were published in 1923. His poems, which included Songs of Action and Songs of the Road, appeared in 1922, and prime among his non-fiction work was his six-volume history of The British Campaign in France and Flanders (during the First World War of 1914-1918). In his later years Doyle became a convinced Spiritualist, and wrote a number of works on the subject, including The New Revelation in 1918 and A History of Spiritualism in 1926.

xxxxxConan Doyle took an active part in the affairs of his day. As we have seen, he was deeply involved in the campaign for the reform of the Congo Free State - his pamphlet entitled The Crime of the Congo was published in 1909 -, and at the turn of the century he produced two works, a pamphlet entitled The War in South Africa: Its Cause and Conduct, and a book, The War in South Africa, in an attempt to justify Britain’s role in the conflict. And early in the 20th century he intervened in two high-profile criminal cases, averting a miscarriage of justice and, by so doing, assisting in the establishment of the Court of Criminal Appeal in 1907. He died of a heart attack at Windlesham, his house in Crowborough, East Sussex, and was buried in the churchyard at Minstead in the New Forest. The epitaph on his gravestone describes him as Knight, Patriot, Physician and Man of Letters.

xxxxxIncidentally, Conan Doyle was given the Christian names of Arthur Ignatius Conan, but for some unknown reason the third name became linked with his surname, and, as a writer, he became known the world over as Conan Doyle. He married Louise Hawkins in 1885 and, following his wife’s death in 1906, he married Jean Leckie. He fathered five children, a girl and a boy with his first wife, and two boys and a girl with his second. ……

xxxxx…… Conan Doyle was a keen sportsman. While working in Southsea he played golf and kept goal for the local football team. And from 1899 to 1907 he occasionally played cricket for the Marylebone Cricket Club. As a bowler he only managed to take one first class wicket, but consoled himself with the fact that it was the wicket of the famous cricketer W.G. Grace! ……

xxxxx……xHis book The Coming of the Fairies, published in1921, was in response to the so-called Cottingley Fairies, pictured in a series of five photographs allegedly taken by two young cousins at the bottom of a garden in Cottingley, near Bradford, in 1917. Along with some others, he believed the photographs were genuine and declared his belief in fairies and spirits. The photographs were later shown to be fakes. ……

xxxxx……xSherlock Holmes, the world famous detective who lived in Baker Street, London, and was noted for his logical reasoning, is particularly remembered for the phrase “Elementary my dear Watson”. In fact this saying does not appear in any of Conan Doyle’s stories. It was first used at the end of the 1929 film entitled The Return of Sherlock Holmes. ……