xxxxxJohn Donne, the leader among the English metaphysical poets, produced most of his literary work before the reign of Charles I, but his poems were not published until 1633 and it is upon these Songs and Sonnets that his fame rests today. His poems were both religious and secular, and, because of his vivid imagination, were often full of complex imagery and irregular form. His love poetry could be tender, passionate and sometimes cynical. He was brought up a Roman Catholic, but became an Anglican priest in 1615 and, as royal chaplain, gained a wide reputation for his eloquent sermons and religious writings. His dazzling wit can best be seen in works like Paradoxes and Problems. He was a close friend and fishing companion of the English writer Izaak Walton, and his work influenced poets like Alexander Pope, Robert Browning and W. B. Yeats. He was buried in St. Paul’s cathedral, London. 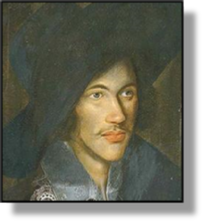 xxxxxJohn Donne, the most outstanding of the English metaphysical poets, was born in London in 1572. Most of his literary work was produced in the reigns of Queen Elizabeth and James I, but his poems were not published until 1633, two years after his death. He attended both Oxford and Cambridge Universities, and began to study law at Lincoln's Inn in 1592. It was while in London, living a somewhat wayward life, that he produced his first poetic works, his Satires, and his Songs and Sonnets, both circulated privately in manuscript form and both well received by a small circle of poetry lovers.

xxxxxBefriended at this time by Sir Walter Raleigh, in 1596 he went with him on a  naval expedition to Cadiz and the Azores, led by the Earl of Essex. On his return, he planned a career in government service, but in 1601 he was imprisoned for a short time on account of his secret marriage to Anne More, the niece of his employer, Sir Thomas Egerton, Lord Keeper of the Great Seal. Disinherited as a consequence, he and his wife took refuge at the home of a relation in Pyrford, Surrey, and it was here that he wrote his longest poem, The Progresse of the Soule. He later moved to Mitcham, near London, where, unable to obtain full-time employment, he was obliged to depend upon the generosity of noble patrons. He continued to write, however, and, during this time, produced his Divine Poems. He later summed up his plight during these poverty-stricken years with the pun: John Donne, Anne Donne, Undone"!  But despite their early "undoing", the Donnes eventually produced twelve children, seven of whom survived childhood. 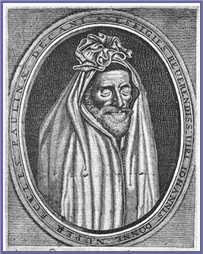 xxxxxIn 1608, according to one account, he was reconciled with his father-in-law and this put an end to his money worries. Be that the case or not, two years later his career took off when he gained royal approval for his Pseudo-Martyr, a work in which he argued that Roman Catholics could pledge allegiance to James I without compromising their faith. Although brought up as a Roman Catholic, he became an Anglican priest in 1615 and shortly afterwards was appointed royal chaplain. In this post and in the higher office of dean of Saint Paul's Cathedral, taken up in 1621, his eloquent and spellbinding sermons, some three hours long and preached before King Charles, earned him a wide reputation. Notable among these was his Death's Duel, delivered just a few weeks before he died of consumption in London in March 1631. Hexwas buried in St. Paul's Cathedral, where his marble effigy, the work of the English sculptor Nicholas Stone, (c1586-1647), was based on a drawing of Donne in his shroud, made during his last illness! (illustrated). 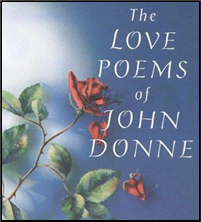 xxxxxDonne's work covered a wide range of subjects, both religious and secular. His ardent imagination produced a deal of complex, ingenious imagery, and the irregular form of his poetry was far removed from the elegant, rhythmic verse of his day. His love poetry could be both violent and tender. Some exalted the virtues of true love but, unlike the sentimental sonnet then in vogue, his verse could also be cynical in tone, and it was this aspect above all that influenced the Cavalier Poets. Likewise his fellow metaphysical poets, such as George Herbert, Henry Vaughan and Richard Crawshaw - aiming to fathom out man's inner feelings - drew deeply from the introspection and elaborate metaphor of his religious poetry. His ready wit and dazzling play on words are exemplified in his Paradoxes and Problems, and the telling effect of his satire can be appreciated in his Ignatius His Conclave, a prose work which attacks the Jesuits and banishes the soul of Loyola to the moon - where he can do less harm!

xxxxxA close friend and fishing companion of the English writer Izaak Walton, Donne's poetry and prose, though popular in his own time and destined to influence the work of poets like Alexander Pope, Robert Browning and W.B. Yeats, did not become widely appreciated until the early 20th century. It was then that the English poet T.S. Eliot published a poem praising the work of the metaphysical poets for attaining what he called "a unification of sensibility". In addition to his verse, Donne also left a large collection of essays and the text of some 160 sermons.

xxxxxIncidentally, the Cavalier Poet Thomas Carew was a great admirer of Donne. His Elegy on the Death of Dr. Donne, published in 1633, praised the quality of his verse, describing it as “a mine of rich and pregnant fancy”. ……

xxxxx……  In 1640 Izaak Walton (famous for his book on fishing), wrote The Life of Dr. John Donne. He described his friend as a saint who preached “like an angel in a cloud”.

xxxxx……  Some of Donne's verse has proved most memorable and none more so than the famous lines contained in his prose work Devotions upon Emergent Occasions, completed in 1624 following a severe illness.  Dealing with the theme of death, he writes:

No man is an island, intire of it selfe ……  any man's death

diminishes me, because I am involved in Mankinde; and

therefore never send to know for whom the bell tolls: it tolls for thee.  ……

Stay, O sweet, and do not rise!

The light that shines comes from thine eyes;

The day breaks not; it is my heart,

Because that you and I must part.

Stay! Or else my joys will die

And perish in their infancy.

No spring nor summer beauty

hath such grace as I have

seen in one autumnal face.