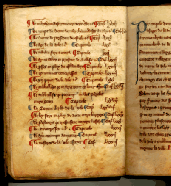 xxxxxThis incredible survey of England - incredible because of its scope, detail and the speed with which it was carried out - was ordered by William the Conqueror for three main reasons: to calculate what land tax could be levied; to estimate the wealth of his barons (and thus their potential threat), and to find out the value of his own crown lands.

xxxxxCarried out by eight panels of commissioners and completed in 1086, it covered the vast majority of the country, but Northumberland and Durham were excluded, as also, it would seem, were some of the larger towns, such as London and Winchester. The popular name for this survey - the "Doomsday" Book - simply reflected the fact that there was no appeal against its findings, many of which were to be used for the levying of taxes! 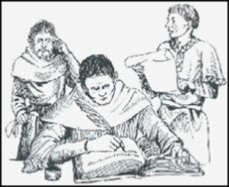 xxxxxThe vast quantity of data required was obtained by answers to a long list of questions or by formal meetings in the chief county towns. The names of all landowners, from the highest to the humblest, were listed, together with the size of their land, its ploughing capacity, the number of workers employed, the possession of amenities such as fishponds and mills, and the variety and quantity of livestock held at the time. All was noted down and, more to the point, given a precise value in pounds. Little wonder that there was widespread resentment against this Great Survey,

xxxxxThis meticulous survey also revealed the extent of the revolution brought about by the Norman Conquest. By this date only two Anglo-Saxon magnates remained as tenants in chief, and all the abbots and bishops were Norman with the exception of the Bishop of Worcester. And much land in the North-East was declared worthless, a sharp reminder of the savage Harrowing of the North that had taken place nearly two decades earlier.

xxxxxThe Domesday Book - in fact, there are two volumes - is held in the Public Records Office at Kew. It is, as you can imagine, a wonderful source of information about Anglo-Norman England and it bears witness, too, to the thoroughness of the Norman feudal system.

xxxxxDesigned to calculate what taxes could be levied, and what wealth his barons possessed, the Domesday Book was a remarkable survey of land tenure, stock and farming amenities (such as fishponds and mills), all obtained by a panel of roving commissioners. These men asked questions, made detailed notes, and valued every item recorded. Completed in 1086, the vast majority of the country was covered, but some areas were excluded, along with some of the larger towns. Compiled for the purpose of levying taxes - hence the word "domesday" - it was a tribute to Norman efficiency.