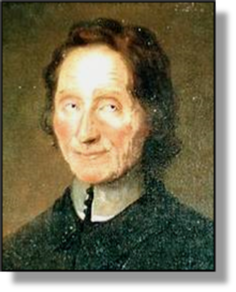 xxxxxThe French philosopher and theologian Nicolas Malebranche (1638-1715), a prominent developer of Cartesian thought, is particularly remembered for his attempt to solve the problem thrown up by Descartes’ mind-body concept. In his theory of occasionalism, first contained in his major work The Search for Truth, he argued that mind and body were able to be totally distinct from one another because the causal interaction between them was powered by God. It was by divine power that the sensations and wishes of our mind were correlated with the motions of our body. There was only one true cause, he argued, because there was only one true God. But this theory proved unpopular with other thinkers and many remained unconvinced. 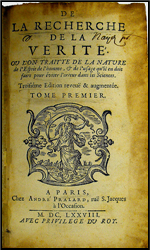 xxxxxMalebranche published a number of works on theology, metaphysics and ethics, and, as a scientist, he also made contributions to the study of optics, the nature of light and colour, and the laws of motion. In his major work, The Search for Truth, written in 1674 and 1675, Malebranche covered a wide variety of topics, concentrating mainly upon the principal sources of human error and the means of avoiding these errors in order to find the truth. And contained therein is his famous doctrine of the Vision in God, the theory that ideas that function in human knowledge and perception can only exist, in fact, in the divine intellect. We know and perceive

ideas, therefore, through the working of God.

xxxxxAs we shall see, his theories were not generally popular - particularly with the Dutch philosopher Baruch Spinoza -, and a number of his later writings, notably his Treatise on Nature and Grace of 1680, brought him into a direct and often bitter conflict with the French philosopher Antoine Arnauld, the leading exponent of Jansenism. He objected to Malebranche’s Vision in God, his concept of Grace and the relationship he made between religion and metaphysics. Malebranche found a friend, however, in the German philosopher Gottfried Leibniz, when he came to Paris in 1672. They met frequently to discuss their ideas on philosophy and mathematics. And his writings had a direct albeit partial influence upon the thought of the Irish philosopher George Berkeley. Among other works by Malebranche were a Treatise on Ethics of 1680, Dialogues on Metaphysics and Religion eight years later, and his Dialogue between a Christian philosopher and a Chinese philosopher, published in 1709.

xxxxxThe French philosopher and theologian Nicolas Malebranche (1638-1715) is particularly remembered today for his attempt to solve the problem created by Descartes’ mind-body concept. His theory of occasionalism argued that, in fact, mind and body could be totally distinct one from another because the causal interaction between them was powered by God. It was divine power which correlated the wishes and sensations of our mind with the motions of our body. And his famous doctrine of the Vision in God went further, claiming that human knowledge and perception could only exist in a divine intellect and were therefore the workings of God. However, these theories proved generally unpopular, and one thinker in particular, the French philosopher Antoine Arnauld, roundly objected to them. Malebranche’s major works were In Search of Truth, Treatise on Ethics, Treatise on Nature and Grace and Dialogues on Metaphysics and Religion. He numbered among his acquaintances the German philosopher Gottfried Leibniz, and his work influenced the Irish philosopher George Berkeley.

xxxxxThe French mathematician, philosopher and scientist René Descartes was one of the world’s greatest thinkers. In his Discourse on Method of 1637 he set out his basic theory - the need to doubt everything until one reaches a premise that is without doubt, as in “I think, therefore I am”. He also wrote specialised books on mathematics, astronomy and animal behaviour, and his interest in optics established this subject as a recognised science. In mathematics, his greatest contribution was in forging links between the disciplines of geometry and algebra, whilst in science he argued that there was a spatial substance known as matter and a thinking substance known as the mind. His major works included Philosophical Essays, Geometry, Meditations on the First Philosophy, and Principles of Philosophy. He was a man of rare talent, but his extreme rationalism was not without its critics, including Blaise Pascal (1656 CW), and he fell short of accepting the Copernican theory of the universe. 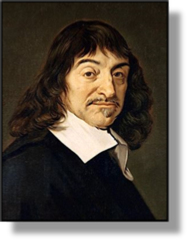 xxxxxThe French mathematician, philosopher and scientist René Descartes was one of the most brilliant and influential thinkers in human history. Writing at the dawn of the scientific revolution, he is sometimes referred to as the father of modern philosophy. He was born in La Haye, south of Tours, and attended the Jesuit school of La Flèche in Anjou. After studying law at the University of Poitiers, graduating in 1616, he served in both the Dutch and Bavarian armies, but saw no action. He then resided for some years in Italy and France, but in 1628 settled in the more tolerant atmosphere of the Netherlands to continue his studies, determined to construct a system of knowledge that would encompass all human understanding. He worked in various cities over the next 20 years, including Amsterdam, Utrecht and Leiden. In 1649 he travelled to Stockholm to instruct Queen Christina of Sweden in philosophy and it was there that, falling victim to the severity of the northern winter, he died of pneumonia in February the following year. 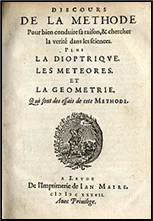 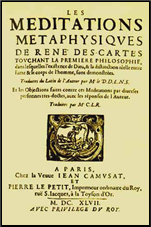 xxxxxHis first major work was his Philosophical Essays. Published in 1637, this contained papers on geometry, optics and meteors, and his Discourse on Method, an exposé of his philosophical ideas. There followed his Meditations on the First Philosophy of 1641, and his Principles of Philosophy three years later. He also wrote a number of treaties or specialised books on geometry, astronomy and animal behaviour, and his interest in optics, begun during his stay in France in the 1620s, established this subject as a recognised science. It was during his study of optics that he was the first to publish the fundamental law of reflection which states that the angle of incidence is equal to the angle of reflection. It is not known whether he arrived at this law independently, or knew of the law devised by the Dutch physicist Willebrord Snell in 1621. Be that as it may, such research led him to examine the anatomy of the eye and the mechanics of vision.

xxxxxIn his study of philosophy, he applied methods from both science and mathematics in his search for certainty. He argued that certain universal truths could be discovered purely by deductive reasoning. His own philosophy, sometimes called "Cartesianism", was based on the premise known as cogito ergo sum ("I think, therefore I am"). As one could not fully rely on one's senses because they were subjective, then everything had to be doubted, and this doubting thus became the one certainty. It followed that to doubt was to think, and the process of thinking proved that one existed. From this certain fact or axiom, he deduced the existence of God, and the creation by Him of two fundamentals, one of the mind and one of body. These were two entirely distinct entities, a “dualism” wherein the mind was non-physical and the body was material. However, the means by which these fundamentals were connected was left unexplained and this weakened his deduction. 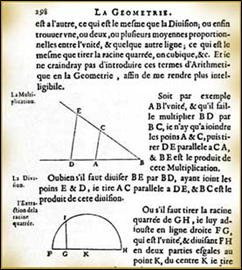 xxxxxIn the field of mathematics, his greatest contribution was his work La Géométrie, published in 1637. In this treatise he was the first to forge links between the disciplines of geometry and algebra, showing how algebra could be used to obtain an analysis of geometric problems (known as Analytic Geometry). It followed that he was the first to make a distinction between those "geometric" curves which can be expressed as an equation, and those "mechanical" curves, which cannot. Among other advances, he invented the method of indices to express the powers of numbers, and formulated the "Descartes' rule of signs" in order to find the number of "true" (positive) and "false" (negative) roots of any algebraic equation.

xxxxxIn science he claimed that the material universe could be explained in terms of mathematical physics. The human body was a "clockwork machine", but the mind or soul was superior, unique and capable of surviving the death of the body. Thus, in what came to be known as "Cartesian dualism", there was a spatial substance, known as matter, and a thinking substance, known as the mind or thought. In his mechanical interpretation of the physical world, however, his explanations sometimes missed the mark. At first, for example, he tended to accept the Copernican theory of the universe, and wrote a book, The World, in support of it, but when the theory was pronounced heretical by the Inquisition in 1633 he suppressed publication of his work and sought another explanation. He eventually came up with a none-too-convincing theory based on vortices whirling about the sun.

xxxxxBut the extreme rationalism adopted by Descartes was not without its critics. As we shall see (1656 CW), his contemporary, the French philosopher Blaise Pascal, was one of the first to reject the deductive reasoning of his contemporary in his major work Thoughts, and others were to follow. And his dualism, the "mind-body concept", was also to be severely challenged in the years ahead.

xxxxxIncidentally, it would seem that Queen Christina had a part to play in the untimely death of Descartes. Though fully aware that the philosopher was not an early riser, she insisted that he got up at five o'clock in the morning to give her lessons on philosophy. Furthermore, she kept him busy. He was ordered to write a ballet in verse - The Birth of Peace - to mark her role in the Peace of Westphalia, and he was required to draw up the statutes for the Swedish Academy of Arts and Sciences. It was while presenting these statutes to the Queen in the cold early hours that he caught the chill that led to his death. Why he chose to go to Sweden in the first place is not clear. It has been suggested that he made the move because in the Netherlands at that time he was under attack from Calvinist theologians. 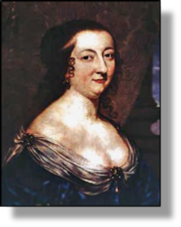 xxxxxWhen in Paris, Descartes, together with other intellectuals of this period, was a visitor to the literary salon of the Marquise de Rambouillet (1588-1665), a French society hostess (illustrated). Shexopened her townhouse as a salon in 1617, and it remained a centre of wit and learning for close on 50 years, attended by members of the aristocracy as well as men of letters. Among those who gathered at the "Hôtel de Rambouillet" were the chief minister, Richelieu, the dramatist Pierre Corneille, the poets Jean Chapelain (1595-1674) and François de Malherbe, and the writers Madame de Sévigné and Madame de la Fayette. Because the demonstration of culture and refinement required of these gatherings often bordered on affectation, the salon was ridiculed, among others, by the French dramatist Molière in his Les Précieuses ridicules, (The Affected Young Ladies), produced in 1659. Nonetheless, the salon played an influential part in the development of French literature throughout the first half of the 17th century, and, like the Académie Française - founded by Richelieu in 1635 - served to preserve the purity of the French language.