THE DECLARATION OF INDEPENDENCE 4TH JULY 1776

xxxxxAs we have seen, the First Continental Congress was held in September 1774, following the harsh measures imposed after the so called Boston Tea Party of 1773. It appealed to George III for fairer treatment, but the petition was rejected. The Second Congress, summoned in May 1775, took a stronger stand following the Battles of Lexington and Concorde. An army was raised by General Washington and, as a result, George III declared a state of rebellion. In the New Year, public opinion was greatly influenced by the pamphlet Common Sense, a powerful work in favour of independence, produced by the Anglo-American writer Thomas Paine. The new nation's Declaration of Independence was almost entirely written by the delegate Thomas Jefferson. Made public on 4th July 1776, it was based on the writings of the English philosopher John Locke, arguing that government had to be founded on consent, and designed so as to protect the rights of its people. As such, it had a marked influence on political thought from the French Revolution onwards. But its main task was to win over public support, particularly in France, Britain's prime enemy. For that reason it gave a long list of “injuries and usurpations” carried out by George III, and dubbed him a tyrant, unfit to be the ruler of the United States. But, in fact, the thirteen states were anything but united. A compromise constitution was drawn up by the Articles of Confederation in 1777, but they were not ratified until 1781. In the meantime government by Congress was constantly hampered by suspicion and jealousy between the former colonies. As we shall see, in the closing stages of the war, and in the years directly after the Peace of Paris in 1783, the new nation came close to self-destruction. 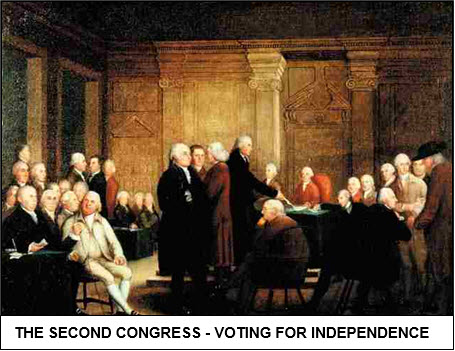 xxxxxAs we have seen, the First Continental Congress was called in September 1774, following on from the harsh measures (the “Intolerable Acts”) imposed after the so-called Boston Tea Party of 1773. Amid widespread indignation and resentment, all the colonies except Georgia met at Philadelphia to make loud their protest. The congress drew up a Declaration of Rights and Grievances, threatened civil disobedience, and appealed directly to King George III for fair treatment. At this stage all that was wanted was a restoration of harmony between the colonies and the mother country. But the mood began to change when parliament rejected the petition.

xxxxxEven so, when the Second Continental Congress was held in Philadelphia in May 1775, some eight months later, the majority of the leaders were still hoping for a reconciliation. All this changed, however, when news arrived of the armed clashes at the Battles of Lexington and Concord the previous month. The shots fired at Concord were not likely to have been heard “round the world” at this early stage, but they were certainly heard loud and clear in Philadelphia. Though a further appeal was made directly to the British people, Congress commissioned General George Washington to raise an army, justifying its action by its Declaration of the Causes and Necessity of Taking Up Arms. In the August George III responded by declaring a state of “rebellion and sedition”, and hiring 20,000 Hessian (German) soldiers. But even at this late stage many regarded the conflict as a civil war. There was little open talk of independence as yet. 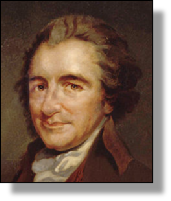 xxxxxIn the New Year, however, all this changed. The political as well as the military line was drawn and came into focus. In January the Anglo-American writer Thomas Paine (illustrated) published his political pamphlet Common Sense, a powerful and persuasive piece of writing calling for American independence. It sold 100,000 copies in three months, a total of more than 500,000, and exercised a profound influence on public opinion. It put into words what many of the colonists were thinking. With the capture of Boston in March 1776, the Congress accepted that it could no longer claim allegiance to the British crown. Work was begun on the drawing up of the American Declaration of Independence, a document which was to become a great landmark in the history of political t 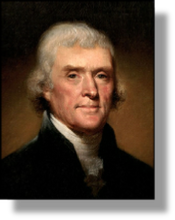 xxxxxA committee, which included the delegates Thomas Jefferson, Benjamin Franklin and John Adams, was appointed to produce the declaration, but Jefferson (illustrated), a political theorist, was assigned the task of preparing the draft. He willingly did so, later declaring that he used “neither book nor pamphlet” in the writing of it, and that he intended that it should be “an expression of the American mind”. It was revised only slightly by Benjamin Franklin and John Adams, but Congress made a number of alterations, including the deletion of a clause condemning the slave trade. The Declaration was made public on the 4th July 1776.

xxxxxThe document is best remembered today for a statement in the opening passage, the import of which was destined to have a profound influence on political thought from the French Revolution onwards. It leant heavily upon the writings of the English philosopher John Locke, who held that all government was to be founded on consent, designed only to protect the inherent rights of its people.

xxxxxWe hold these truths to be self-evident, that all men are created equal, that they are

xxxxxendowed by their Creator with certain unalienable Rights, that among these are Life,

xxxxxLiberty, and the pursuit of Happiness. That to secure these rights, Governments are

xxxxxinstituted among Men, deriving their just powers from the consent of the governed.

xxxxxBut the declaration was primarily designed to win over public opinion, not only at home, but also abroad - and especially in France, Britain's long standing enemy. It therefore proceeded at some length to justify its action in seeking independence. As the colonies had always insisted that their contract was with the British crown, this meant that George III bore the brunt of the attack.

xxxxxThe history of the British King of Great Britain is one of repeated injuries and usurpations,

xxxxxall having in direct object the establishment of an absolute Tyranny over these States….

xxxxxof terms: Our repeated Petitions have been answered only by repeated injury. A Prince,

xxxxxwhose character is thus marked by every act which may define a Tyrant, is unfit to be the

xxxxxruler of a free people....

xxxxxWe therefore, the Representatives of the United States of America ... solemnly publish and

xxxxxdeclare, That these United Colonies are ... absolved from all Allegiance to the British crown.... 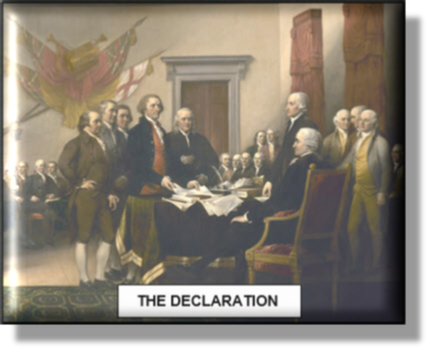 xxxxxBut, in fact, these “United Colonies” were far from united. Indeed, the actual task of providing a constitution for a new nation of thirteen disparate “colonies” proved difficult in the extreme. Suspicion and jealousy still existed between the states themselves, and, at the same time, each one was wary of an imposed central authority. Thus whilst the Declaration of Independence could be set down on parchment, and its fine passages admired and applauded, there was much to fear. As Benjamin Franklin was heard to mutter, “Gentleman, we must all hang together now, or we shall assuredly all hang separately.”

xxxxxIn fact a national constitution drawn up via the Article of the Confederation was not completed until 1777, and not ratified by all the states until 1781. And even then, these Articles formed a government with but partial jurisdiction, just giving Congress sufficient legal authority - and not always that - with which to conduct the war. Amid conflicting aims and prejudices, government sometimes tottered on the brink of collapse. Indeed, in the closing stages of the conflict and, as we shall see, in the years directly following the Peace of Paris in 1783, many of the states began to ignore the dictates of Congress, failing to send representatives to it, and refusing to make their financial contribution. One or two even took on the trappings of complete independence 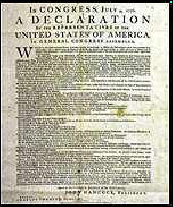 again. The bricks of a new nation were in place, but, as of yet, there was no cement with which to bind them together.

xxxxxIncidentally, after some years the parchment on which the Declaration of Independence was written began to deteriorate, and the text began to fade. The document is now sealed in a glass and bronze case filled with inert helium gas, and since 1952 has been housed in the National Archives exhibition hall in Washington D.C. ……

xxxxx...... The painting above showing the signing of the Declaration is by John Trumbull (1756-1843), an American artist who gained fame for his paintings of the major battles and events in the War of American Independence. During the conflict he served as an aide to General George Washington, but in 1784 he went to London to study under the American artist Benjamin West. It was at his suggestion and with the support of the American statesman Thomas Jefferson, that he began his series of historical paintings. In 1817 he was commissioned by the U.S. Congress to enlarge four of his scenes to decorate the rotunda of the Capitol at Washington - the Surrender of Burgoyne, the Surrender of Cornwallis, the Declaration of Independence, and Washington Resigning his Commission. ...… 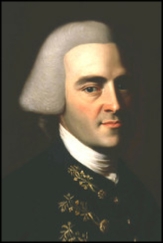 xxxxx......  AsxPresident of the Continental Congress, John Hancock (1737-1793) was the first to put his signature to the Declaration of Independence in 1776. Knowing that a price had been placed on his head by the British government, he

signed in a bold, flamboyant hand so that, he declared, the British ministry could read his name without spectacles and double their reward! From then on his name became a colloquial term for a signature in the United States.