xxxxxThe French cartographer Bourguignon d'Anville, continuing the work of his fellow countryman Guillaume Delisle, was responsible for a vast improvement in the making of maps. He produced 211 maps in all, and, by their accuracy, came to be regarded as the founder of modern cartography. He made maps of China and the continents of Africa and Asia, and his General Atlas, containing 66 maps, (1743), was many times revised. A reputable classical scholar, some of his work was concerned with ancient and medieval geography. As we shall see (1790 G3b), the advances he made in his profession were ably continued by the Englishman Aaron Arrowsmith towards the end of the century. 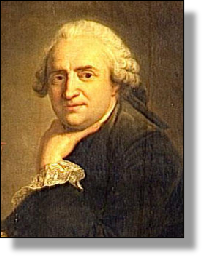 xxxxxA vast improvement in the standard of map-making was achieved by the Frenchman Jean-Baptiste Bourguignon d'Anville. He continued with added distinction the advances already made in cartography at the turn of the century by his fellow countryman Guillaume Delisle. In total, he produced 211 maps, of which 66 were included in his General Atlas, published in 1743, and many times revised. In all his work he showed great accuracy in the measurement of distances, and he took particular care in his choice of source material. It is not surprising, therefore, that he is generally regarded as the founder of modern cartography.

xxxxxCassini III (1714-84), grandson of the famous astronomer Jean Dominique Cassini, spent much of his working life directing the making of the first national survey of France by means of triangulation and topographical surveys. It was eventually published five years after his death under the title Geometric Map of France (or Cassini's Map). The work was completed by his son Jacques Dominique, and its 182 sheets later formed the basis of the Carte de l'État-Major, begun in 1818. 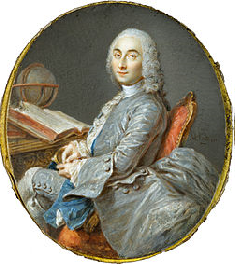 xxxxxYet another Frenchman at this time who gained a reputation for his pioneer work in map-making was César-François Cassini de Thury, often shortened to Cassini III (1714-1784). As we have seen (1665 C2), his grandfather, Jean Dominique Cassini, had been an accomplished astronomer, and was the man who had taught Guillaume Delisle back in the 1690s. From about 1740 onwards Cassini III spent much time directing the making of a national survey of France, but he did not live to see its completion. Eventually published in 1793 under the title Geometric Map of France (or Cassini's Map), it was the first map ever produced to show an entire country created by means of triangulation and topographical surveys.

xxxxxWorkxon this vast project was completed by his son Jacques Dominique Cassini (1748-1845), also a geographer. The story goes that, when published, France was found to be somewhat smaller than originally thought, much to the consternation of the king! Later, this map, made up of 182 sheets, formed the basis of the Carte de l'État-Major, begun in 1818. Jacques Dominique also played a prominent part in dividing France into its départements, the largest units of local government.

xxxxxHis first map of repute was that of China which, as we have seen (1673 C2), was based on a map made by the Jesuits who worked for the Chinese Emperor K'ang-hsi. It was completed in 1734 (illustrated here) and revised two years later. In his map of Italy - published in 1743 - he was able to correct a large number of errors in the current productions, and he then went on to produce maps of the African and Asian continents, and another of the sub-continent of India. In these works, he deliberately omitted features of doubtful validity, and although his maps contained inaccuracies, these mistakes were mostly confined to areas of the world yet to be explored. And apart from being a cartographer, he was also a reputable classical scholar. As a result, some of his maps and parts of his memoirs are concerned with ancient and medieval geography. A map of Ancient Greece is shown below. 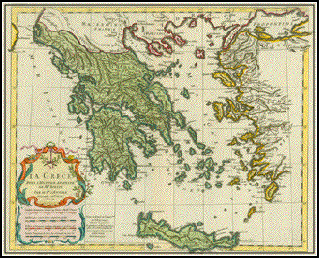 xxxxxRegarded as the finest geographer in Europe, and with a world-wide reputation as a map-maker, he was appointed royal geographer in 1773. The exceptionally high standard he achieved in his work was continued, as we shall see (1790 G3b), by the English cartographer Aaron Arrowsmith towards the end of the century.

xxxxxIncidentally, Philippe Buache, son-in-law of the cartographer Guillaume Delisle, was also a royal geographer, appointed in 1729. He is best remembered today as a pioneer in the use of contour lines to demonstrate height on relief maps.