xxxxxThe initial success of the Roman Catholics in the Thirty Years’ War, begun in 1618 (J1), alarmed Christian IV, king of Denmark and Norway. His invasion of Saxony in 1625 was at first successful, but in April 1626 Albrecht von Wallenstein, the Duke of Friedland, gained a victory over him at Dessau Bridge, and then the Catholic League under Count Graf von Tilly defeated him at Lutter am Barenberge. By the Treaty of Lubeck, Christian lost territory in Germany, and the Protestants were deprived of any territory secured from Roman Catholics since the Peace of Augsburg in 1555. In the meantime, however, the Dutch had joined the fight and the conflict had become a colonial one. They held their own, but by the end of 1629 the Protestants were near to defeat. It was then, in 1630, that Gustav Adolphus, King of Sweden, came to their aid, and the tide of war turned once again. 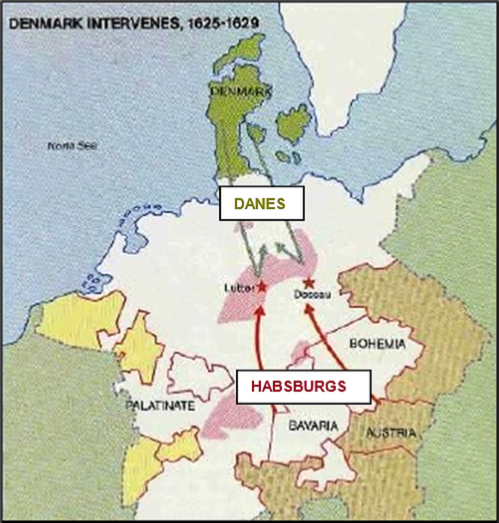 xxxxxAs we have seen in 1618 (J1), the first phase of this long and bitter struggle, the so-called Thirty Years’ War, lasted for ten years and was mainly concerned with a clash between the Protestant Evangelical Union and the Roman Catholic League. Confined for the most part to the northern regions of the Holy Roman Empire (Germany), the early Protestant success was followed by a serious defeat at the Battle of White Mountain, just outside Prague, in November 1620. The Protestants staged something of a come-back two years latter at Wiesloch, but by the end of 1624 Bohemia, the epicentre of the conflict, had been forcibly returned to the Roman Catholic faith.

xxxxxBut this resurgence of Catholic power in general, and the growing might of the Habsburgs in particular, alarmed the western nations of Europe. When a number of German Protestant states sought help there was an immediate response. This did not come from England or France, both faced with domestic problems at this time, but from the king of Denmark and Norway, Christian IV. Anxious above all to put an end to Habsburg control of the Danish duchy of Holstein, he mobilised a large army in the spring of 1625 and, supported by a number of German princes, invaded Saxony. It met with little resistance for over a year, but during this time Emperor Ferdinand II's forces were strengthened by the Catholic League under Count Graf von Tilly, and by a large mercenary army under Albrecht von Wallenstein, the duke of Friedland. InxApril 1626 Wallenstein gained a victory at Dessau Bridge, and four months later Tilly roundly defeated Christian's major force at Lutter am Barenberge.

xxxxxFlushed with victory, the combined imperial armies then swept over northern Germany, leaving a trail of destruction in their wake. Christian IV was forced to retreat into the Jutland Peninsula, and in March 1629 Ferdinand was able to issue the Edict of Restitution, depriving Protestants of any claim to Roman Catholic property taken since the Peace of Augsburg in 1555. Thenxin May, Protestant humiliation was completed - and Habsburg power was once again confirmed - when Christian was obliged to accept the Treaty of Lubeck, depriving him of a number of small territories he had held in Germany. 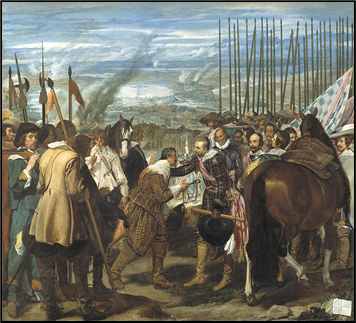 xxxxxBut the fighting was no longer confined to the Holy Roman Empire. By now the struggle had been renewed between the Dutch and the Spanish. Despite the loss of their great fortress of Breda in 1625 (the surrender illustrated), the Dutch more than held their own at sea as well as on land. But this was far more than a battle for the control of the Netherlands. A colonial conflict now intensified in parts of the Caribbean, South America and Africa, whilst in Europe the struggle, merging with the battle then raging across Germany, spilled over hitherto accepted boundaries. Spanish troops fought in Germany (and later in France), whilst the Dutch gave financial help to Christian IV.

xxxxxBy the end of 1629 the Protestant cause seemed lost and - more to the point for neighbouring states - the Habsburg hegemony over Europe seemed as strong as ever. But as we shall see, in 1630 Gustav Adolphus, King of Sweden, a formidable adversary, entered the lists.

xxxxxIncidentally, in 1628, at the height of the battle raging in the Netherlands between the Spanish and the Dutch, the admiral and director of the Dutch West India Company, one Piet Heyn, sailing along the coast of Cuba, sighted and captured a large Spanish treasure fleet. The immense haul, used to finance the war effort, consisted of four million ducats of gold and silver (probably around two million pounds in those days!)