xxxxxThe French military engineer, Nicholas Joseph Cugnot, produced the first self-propelled road vehicle in 1769. Designed to transport artillery, it was powerful enough to carry 400 gallons of water and four people at a speed of just over two miles an hour. But the small boiler meant that the engine could only work for about 15 minutes. The two-piston engine, designed on the theories of the French physicist Denis Papin, was mounted on a tricycle which was driven and steered by the single front wheel. Crude and cumbersome though it was, it is accepted as the world's first automobile. Similar designs were soon made in France and America. In England, the engineer William Murdock was running a model steam carriage by 1784, and, as we shall see, it was the Cornishman Richard Trevithick who developed this prototype and, in 1804 (G3c), produced the first steam engine to run on rails. 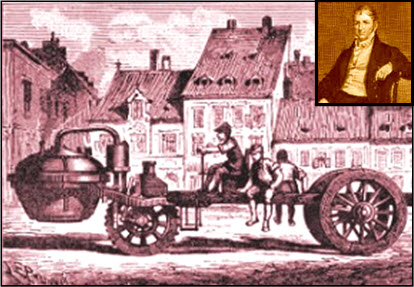 xxxxxThe French engineer Nicholas Joseph Cugnot produced the first self-propelled road vehicle in 1769. Designed to transport artillery, a second version, made the following year, trundled around Paris for a time, but it was beset with problems, particularly the difficulty of maintaining steam pressure. It then had a crash on turning a corner near the Place de la Madeleine and, considered a danger to the public, was shut up in the Arsenal. This put an end to further experiments.

xxxxxCugnot was born in Void, Meuse, and joined the army as a young man. After serving in the Austro-Hungarian army during the Seven Years' War, he was posted to Paris as a military instructor in 1763. It was in this capacity that he was assigned the task of designing a steam-operated gun carriage. After several attempts, he developed a vehicle which was powerful enough to carry 400 gallons of water and four people at a speed of just over two miles an hour. But because of the small capacity of the boiler, the engine could only work for about 15 minutes before it had to stop to get up more steam. The two-piston steam engine was mounted on a tricycle, and this was driven and steered by the single wheel in the front. The engine itself was designed strictly according to the theories put forward by the French physicist Denis Papin in the late 17th century.

xxxxxDespite its shortcomings, this crude and cumbersome steam carriage - it weighed 12 tons - can rightly be regarded as the world's first automobile. It would seem that a similar machine was at work in Amiens, France, by 1790, and that around this time steam vehicles were introduced in Salem, Massachusetts, and Hartford, Connecticut. Steam buses were running in Paris around 1800, whilst in England, the foreman employed by James Watt, William Murdock, was running a model steam carriage on the roads of Cornwall as early as 1784. As we shall see, it was the Cornishman Richard Trevithick who developed Murdock's prototype, and in 1804 (G3c) produced the first steam engine to run on rails.

xxxxxIncidentally, the second version of Cugnot's steam carriage has survived, and is housed in the National Conservatory of Arts and Crafts in Paris. …… 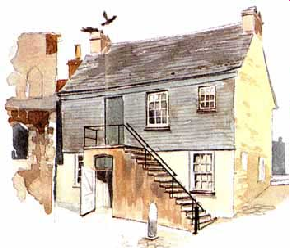 xxxxx…… ThexScottish engineer and inventor William Murdock (1754-1839), an employee and later a partner in the company of Boulton and Watt, made a number of improvements in the development of the steam engine. He worked in Cornwall for ten years and while there he experimented with gas lighting. In the 1790s his house in Redruth (illustrated), and the company’s Soho factory on Handsworth Heath, near Birmingham, became the first to be lit by gas. When he died in 1839 he was buried at St. Mary’s Church at Handsworth, Warwickshire, close by the graves of his former bosses, James Watt and Matthew Boulton. …… 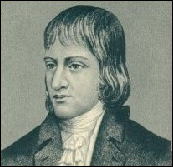 xxxxx…… Forxthe record, in 1799 the French engineer and chemist Philippe Lebon (1767-1804) (illustrated) produced his “thermolampe”, powered by distilling gas from sawdust heated in a glass tube. In 1801 he exhibited a larger version of the lamp in a Paris hotel, but he failed to convince the French government that gas lighting had a future. On his death - robbed and fatally stabbed in 1804 - a German inventor named Frederick Winsor (1763-1830), having examined the thermolampe, came to London and set up a gasworks. He lit the Lyceum Theatre with gas in 1804, and one side of Pall Mall three years later. By 1819 the city had 288 miles of gas main serving over 50,000 burners! By 1830 all the major cities of Europe were lit by gas.