THE FINAL DEFEAT OF THE CRUSADERS 1291 and THE RESULTS  (E1)

xxxxxAs we have seen (1250 H3), the campaigns launched against the Holy Land by the Mamluke Sultan Baybars, left the Christians with just a scattering of outposts. With his death in 1277, it was hoped that help would arrive, but the Council of Lyon could summon little support. European rulers were not willing to spare the cost or the time to aid a Latin State which too often lacked sound leadership and a common purpose. When the Mamlukes resumed their attacks, the fate of the Crusaders and the resident Christians was sealed. Tripoli fell in 1289 and Acre two years later in 1291. Christians who failed to escape were killed or sold into slavery. As for the Orders of Knights, the Hospitallers settled in Cyprus, the Teutonic Knights moved their operations to Eastern Europe, and the Order of Templars, accused of heresy and immorality, was stood down and later disbanded. The days of the Crusades were over. 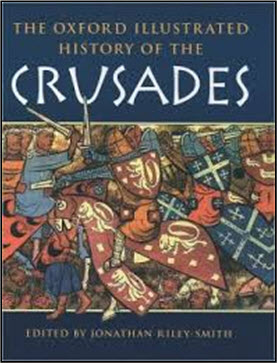 xxxxxWe have seen (1250 H3) what havoc was wrought against the Crusaders in the final years of the reign of the Mamluke Sultan Baybars. By 1268, after a ruthless series of campaigns against the Christians in the Holy Land, all they had left were a few defiant outposts dotted along the coast.

xxxxxWith the death of Baybars in 1277 the Crusaders hoped that there might be some respite from attack, and that some help might be on its way. In fact, there was only a little respite, and no help was on its way. There had been precious little support for the last crusade, led by Louis IX in 1270, and so when at the Council of Lyons in 1274, Pope Gregory X called for yet another military expedition, his words fell on even deafer ears. European rulers were gravely concerned with the turn of events in the Holy Land, but they were unwilling and, indeed, unable to answer the call.

xxxxxFirstly, they were very dubious about the ability of the Latin State to show a united front against the infidel and use any crusade to good purpose. The military Orders - the backbone of any would-be attack - were habitually in conflict and looking to their own interests; there was no firm leadership; and trade wars, such as that between Genoa and Venice, were continually spilling over into the Levant. Secondly, the cost of these overseas enterprises had grown to such an extent, that European monarchs were loathe to get themselves into debt and find themselves at the mercy of their nobles or threatened with revolt. Furthermore, France, which had always been the mainstay of the crusading movement, was at war with England and sensed the possibility of a long conflict ahead.

xxxxxWhen the Mamlukes resumed their campaign, the fate of the Crusaders and the resident Christians in the Holy Land was sealed. Tripoli fell in 1289 and Acre, the last Latin stronghold, was besieged and captured two years later in 1291, the inhabitants being put to the sword or taken into captivity. Then Acre and all the Christian fortresses along the coast were systematically destroyed. This time there was no one to come to the rescue.

xxxxxChristians who had managed to survive the holocaust fled to offshore outposts, like Cyprus, whilst the military Orders took their skills elsewhere. In 1308 the Hospitallers set up their headquarters on the island of Rhodes, and the Teutonic Knights moved their operations to the Baltic. As for the Knights Templar, they were accused of heresy and immorality - they certainly amassed a fortune from their banking activities - and arrested by the French king, Philip IV, in 1307. As we shall see, five years later (1312 E2), the order was closed down by Pope Clement V.

xxxxxApart from a shameful incident in 1365, when, under the pretence of a crusade, Peter of Cyprus plundered Alexandria and massacred its inhabitants, 1291 marks the end of the crusading movement. A number of half-baked schemes were put forward - such as an economic blockade of Egypt and a concerted preaching campaign - but they all came to nought.

xxxxxResults of the Crusades were many and varied. First and foremost, they gave an enormous boost to trade and the shipping industry, particularly in Italy and the sea-bordering countries of the Middle East. And their very size and complexity provided an important stimulus to Europe’s commercial and banking systems. Furthermore, so expensive did these enterprises prove to be that kings and popes alike turned to direct taxation as a means of raising funds more efficiently. And another spin-off was the improvement in the making of navigation charts, specialising in the first instance in maps of the Mediterranean. Viewed as military operations, they were mostly failures and served only to show the lack of unity between Christian states. Of the individuals taking part, some were genuinely committed to the cause, some were simply on the make, and some were motivated by an awakening spirit of adventure, a “get up and go” mentality which, given time, was to play so important a part in the discovery and exploration of the New World and the lands of the East.

xxxxxThere is always a danger of exaggerating the results of the Crusades, but, spread as they were over two centuries, they clearly had some important, wide-ranging repercussions. This may not apply so much to Syria and Palestine, where little remains apart from the ruins of the churches and strongholds abandoned by the Christians, but in Europe they certainly had an impact.

xxxxxOne of their most enduring legacies was the boost they gave to trade, not only for the Italian cities, but also for the bustling ports and markets of the Middle East. Crusaders brought home a variety of spices, colourful textiles, and various items of hardware. These had been available earlier through other channels, of course, but never on so large a scale. There were, too, the fiscal implications. The Italian banking system was given an enormous boost and became more streamlined to meet the needs of these colossal undertakings, whilst Kings and Popes alike were obliged to introduce more efficient means of raising funds, including direct taxation. And the shipping industry also benefited from the increased demand within the Mediterranean.

xxxxxThe military failure of all but one of these Crusades also had an effect. Not only did it undermine the authority of the Pope, but it clearly showed the disunity which existed within the Christian Church itself. National armies had often acted alone - with dire consequences - or failed miserably to work with their allies in support of the common cause. As we have seen, in one instance a crusade destined for the Holy Land was turned loose on Constantinople, a Christian city, whilst, in another, the Italian possessions of a monarch who was leading a crusade were attacked on the orders of the Pope. It could well be asked whether this lack of unity was not an open invitation to the fanatical infidel, be he a Mamluke Egyptian of the day or an Ottoman Turk of the future.

xxxxxSome joined the ranks of the Crusaders out of sheer greed, hoping to gain from the booty of war, whilst others were genuinely committed to the Christian cause or saw their involvement as an expedient means of gaining salvation. There was, too, a large number of men who went in search of new horizons, and it was this spirit of adventure, awakened in the hearts of so many men at this time, which was later to play so prominent a part in the discovery and the exploration of the New World and the lands of the East.

xxxxxThere was, too, some spin-off in art, literature and architecture, but the Crusades were hardly the vehicles for a trade in the humanities. In fact, Byzantine and Muslim culture had already had their outlets into Europe via Sicily and Spain and were not in need of much reinforcement. 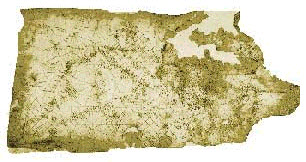 xxxxxIncidentally, the increased passage of ships across the Mediterranean is likely to have accelerated the making of navigational maps for this area. It is probably no coincidence that one of the earliest surviving sea charts, hand-drawn on a piece of sheepskin, has a map of the entire Mediterranean. Found at Pisa and known as the Carta Pisana (illustrated), it is thought to have been made around 1275. It can now be seen in the Bibliothèque Nationale in Paris.

xxxxxIt is certainly true that these charts - often known as portolans from portolano (pilot book) - came to be much in demand with the increase in shipping. The major ports of the area, such as Venice, Genoa, Barcelona and Pisa, often exchanged information about sea routes obtained from their ships’ captains and local pilots. The early portolan charts, being hand-drawn, were very expensive, but became cheaper with the advance in paper making and printing in the sixteenth century.

THE RESULTS OF THE CRUSADES (E1)