xxxxxAs we have seen, Cranmer was appointed Archbishop of Canterbury in 1532. He annulled Henry VIII's marriage to Catherine of Aragon in 1533 (H8), and set about the establishment of an independent English Church. Then, during the reign of Edward VI he played a major part in the compilation of two prayer books and, when the young king died, he supported the protestant Lady Jane Grey. It is not surprising that, on coming to the throne, Mary I had him imprisoned in the tower and then burnt at the stake in 1556. His death, together with those of Ridley and Latimer, lost Mary much of her dwindling support. 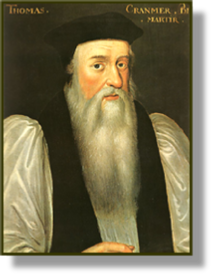 xxxxxAs we have seen (1533 H8), Cranmer was appointed archbishop of Canterbury in 1532 and, together with Thomas Cromwell, became one of the prime movers in the establishment of the independent Church of England. Within five days of his becoming archbishop, he declared Henry VIII's marriage to Catherine of Aragon void from the outset, and his marriage to Anne Boleyn entirely lawful. Under his direction, papal authority was no longer recognised, many Roman Catholic festivals were abolished, and Thomas Becket's shrine in Canterbury Cathedral was desecrated. Indeed, so fervent a Protestant did he become, that when Henry VIII re-enacted certain Catholic doctrines via his Six Articles, Cranmer came out openly against them, despite his allegiance to the king. Then during the short reign of Edward VI, he played the major part in the compilation of the two prayer books and, as one might expect, supported the succession of the Protestant Lady Jane Grey. 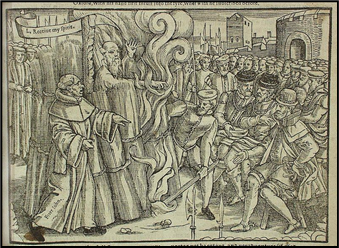 xxxxxTo put it mildly, this was hardly a curriculum vitae to endear him to the Roman Catholic Mary Tudor! Upon her succession he was confined to his palace at Lambeth, and then imprisoned in the Tower of London, accused of heresy. In March 1554 he was taken to a common prison in Oxford and there, under constant interrogation, he made seven recantations of his Protestant beliefs. However, when his life was not spared, he repudiated all his recantations and, whilst being burnt at the stake in 1556, put into the flames the hand that had signed them.

xxxxxCranmer's death, together with those of other Protestant martyrs - particularly the burning of Nicholas Ridley and Hugh Latimer - caused a great deal of discontent throughout the country and lost Mary much of her dwindling support.

xxxxxIncidentally, the English dramatist John Heywood (c1497-c1580) wrote a number of short plays to entertain the royal Courts of both Edward VI and Mary I. Because of the satirical humour they contain, he is often regarded as one of the early exponents of English comedy. Among his works is the allegorical poem entitled The Spider and the Flie, written in 1556. In it, the Roman Catholics are the flies, the Protestants are the spiders, and Queen Mary is the maid who is busily intent on killing the spiders! He also wrote a large number of epigrams, collected in his Epigrammes of 1562, and several ballads. A Roman Catholic, he beat a hasty retreat to Belgium on the accession of Elizabeth I.