xxxxxAs early as 1506, in his private treatise Commentariolus, the Polish astronomer Nicolaus Copernicus put forward the idea that the Sun, not the Earth, was the centre of the Solar System. However, fearing the bitter opposition to such a theory, he delayed publication of his On the Revolutions of the Heavenly Spheres until 1543, the year of his death. In fact, this suggestion, not claimed as a statement of fact, aroused little opposition at first, and the Church did not ban the book until 1616. Without this heliocentric theory, the work of men like Galileo, Kepler and Newton would not have been possible. 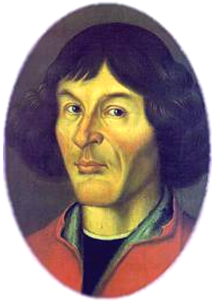 xxxxxIt was the Polish astronomer Nicolaus Copernicus who made the first step towards a more accurate description of the Universe. For some thirty years he held the view that the Sun, not the Earth, was the centre of the Solar System, but this proposition was, literally, so revolutionary - as well as being against church doctrine - that it was not made widely known until the publication of his On the Revolutions of the Heavenly Spheres in 1543, just before his death.

xxxxxHe started this work in 1517 and finished it by 1530, but he feared that even those with some understanding of astronomy would find it difficult to accept that the earth was just another planet, and that the sun was actually the centre of the Universe. His fears were somewhat justified. In 1539, for example, the German reformer Martin Luther, on hearing rumours about the ideas of this “upstart astrologer”, roundly took him to task for wishing to reverse the entire science of astronomy. The sacred Scriptures, he pointed out, clearly stated that Joshua caused the sun to stand still, not the earth.

xxxxxHowever, when his mould-breaking work was eventually published - dedicated, be it noted, to Pope Paul III himself! - it did not produce quite the stir anticipated. A preface by a Lutheran priest stated that the theory it contained was not to be regarded as a statement of fact, and this avoided immediate condemnation by the Roman Catholic Church and, for the time being, tended to tone down opposition among the Lutherans - though the theologian Philipp Melanchthon objected to it and asked that “severe measures” be taken against its author. But it was not, in fact, until 1616 that it was added to the list of forbidden books. 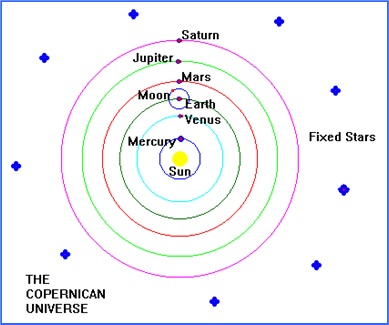 xxxxxCopernicus was born at Torun on the River Vistula in Poland and, after a general education at the University of Krakow, he went to various Italian universities to study the liberal arts, medicine and canon law. His interest in astronomy began in about 1497, and it was after returning to Poland in 1506 that he wrote his Commentariolus, a short treatise outlining his ideas. It was only circulated in manuscript form to a trusted few, but it later formed the basis for his published work in 1543.

xxxxxThe system put forward by Copernicus clearly contained some lingering errors from the ancient theories of Aristotle and Ptolemy, notably its assumption of uniform circular motion. However, without the establishment in principle of what is known as the heliocentric theory (sun-centred theory) the contributions made later by such Copernicans as Galileo, Kepler and Newton would not have been possible. Eventually, as we shall see, this Copernican Revolution was to give birth to the scientific age and lead to a consequent decline in the authority of the Church. 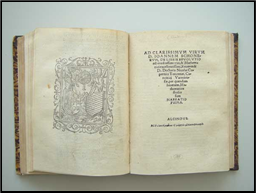 xxxxxIncidentally, in 1540 a young Austrian pupil of Copernicus named Georg Joachim Rheticus (1514-1574) wrote his Narratio prima in which he published for the first time a brief account of his master's revolutionary ideas. It was because this work aroused little serious criticism that Copernicus decided to go ahead with the publication of his own treatise. Whether, as has been suggested, he received a printed copy of the book while on his deathbed is less certain, but we are told that it was published early in 1543 so this is a possibility.