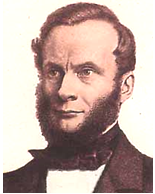 xxxxxThe German mathematician and physicist Rudolf Clausius is often credited with the creation of the science of thermodynamics. He was certainly one of the principal founders of this branch of science. He was born at Koslin, Prussia (now in Poland) and, after attending Berlin and Halle universities, was appointed professor of physics at the Artillery and Engineering School at Berlin in 1850. It was in that year that he produced the first outlined statement of the second law of thermodynamics, a law which, simply put, states that heat cannot of itself pass from a colder to a hotter body (see diagram below). He then went on to apply the laws of thermodynamics to the theory of the steam engine, and formulated thereby the concept of entropy, i.e. the measurement of a system’s energy which is not available for conversion into mechanical work.

xxxxxResearchxinto thermodynamics had been carried out just a few years earlier by two other German physicists. Jules Robert Mayer (1814-1878) (illustrated) had made a number of important discoveries concerning the mechanical equivalent of heat (i.e. the amount of work required to produce a unit of heat), and published his findings in his paper of 1842 entitled On the Forces of Inanimate Nature. Five years later Hermann von Helmholtz (1821-1894) - an eminent physician as well as a brilliant scientist - published his paper On the Conservation of Force, and this provided one of the first and clearest statements of the law of the conservation of energy (regarded as the first law of thermodynamics ) - the principle that energy of interacting bodies or particles in a closed system remains constant (see diagram above).

xxxxxMeanwhile the English physicist James Prescott Joule (1818-1889) was conducting experiments along the same lines, and coming to the conclusion that the various forms of energy, such as heat and electricity, were basically the same and could be changed, one into another. Born in Salford, Lancashire, he was educated by private tutors, among whom was the distinguished English chemist John Dalton, famed for his study of gases.

xxxxxOver a lifetime devoted to scientific research Joule made a valuable contribution in the field of thermodynamics. In 1840, in his paper On the Production of Heat by Voltaic Electricity, he concluded 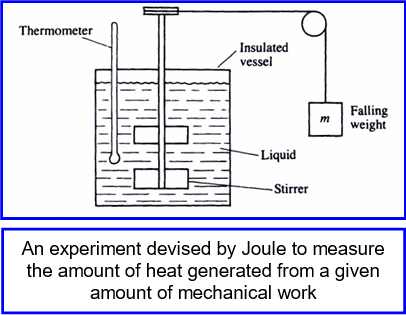 (Joule’s Law) that the heat produced in a wire by an electric current is proportional to the product of the resistance of the wire and the square of the current. Then three years later, after a series of ingenious experiments, he determined the amount of energy needed to produce a unit of heat (Joule’s equivalent). Later, in the early 1850s, he worked with the Irish physicist William Thomson (later Lord Kelvin) and produced what came to be known as the “Joule-Thomson effect”. This discovery - that when a gas expands without performing work its temperature falls - was to be used to good effect in the development of refrigeration later in the century.

xxxxxIncidentally, in recognition of his contribution to thermodynamics, a unit of energy was named after him (the Joule), and the letter J was used to represent the value of the mechanical equivalent of heat.