xxxxxThe Italian botanist and physician Andrea Cesalpino completed his De planatis libri XVI, made up of sixteen parts, in 1583. This work, in which he classified over 1,500 plants, did much to establish botany as a science in its own right. His classification anticipated the work of the Swedish botanist Carolus Linnaeus in 1735 (G2). As a medical man, he was physician to Pope Clement VIII from 1592. His research into the circulation of the blood in the human body made some progress towards the important discoveries made by the English anatomist William Harvey in 1628 (C1). 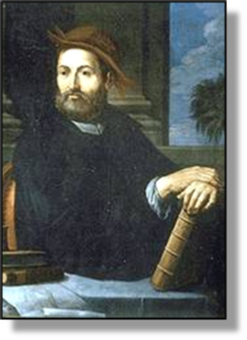 xxxxxThe Italian Andrea Cesalpino was both a botanist and a physician. He was born in Arezzo, Tuscany and attended the University of Pisa, where he later became professor of medicine and director of the botanical gardens. His De plantis libri XVI, written in sixteen parts and completed in 1583, was the first meaningful textbook on botany, and did much to establish this subject as an independent science. In this work he described and classified more than 1,500 plants, using a system of classification based on flowers, fruits and seeds rather than on location or medicinal properties. In this he anticipated the system of binomial nomenclature later introduced by the eighteenth-century Swedish botanist Carolus Linnaeus in 1735 (G2). He failed to grasp the fact that plants are sexual, and there were some errors in his classification, but nonetheless his research greatly assisted the study and development of botany.

xxxxxAs a medical man he became physician to Pope Clement VIII in 1592. During his research into the 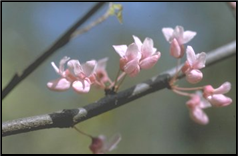 circulation of blood in the human body, he came a step closer to the findings arrived at by the English anatomist William Harvey in 1628 (C1), though he still held that the blood was distributed via the great veins and their branches.

xxxxxIncidentally, the plant illustrated on the right, cercis canadensis, belongs to the Caesalpinia family, a genus named in honour of Cesalpino. 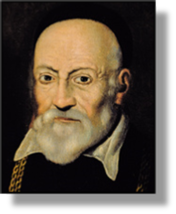 xxxxxAnother anatomist who also carried out research into the circulation of blood at this time was the Italian Hieronymus Fabricius (1537-1619). As professor of medicine at Padua he taught William Harvey for five years, and his special study of the anatomy of veins and the system of valves found in them, (published in his work On the Valves of the Veins in 1603), played an important part in helping his pupil to arrive at a correct understanding as to how blood circulated. 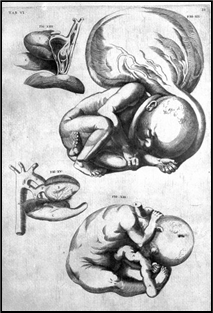 xxxxxFabricius also helped to found the modern study of embryology. He spent most of his life at the University of Padua, first as a student of the brilliant anatomist Gabriel Fallopius, and then, in 1565, as his successor to the chair of surgery and anatomy. It was in 1600 that he wrote his On the Formation of the Fetus, the first work of its kind, in which he outlined his research into fetal development in animals as well as humans, and gave the first detailed description of the placenta. He also did pioneer work on the structure of the eye, fixing the position of the lens and studying the changes in the size of the pupil, and he was the first to give a detailed account of the larynx as a vocal organ. Advances such as these in anatomical knowledge, together with his improvement in surgical techniques and his analytical approach to research, earned him an international reputation, and greatly advanced the development of European medicine.

xxxxxIncidentally, worthyxof mention at this period is the Italian surgeon Gasparo Tagliacozzi (1546-1599). He studied medicine at Bologna University, and in 1576 was appointed professor of surgery there. Over the next twenty years he became renowned for his pioneer work in plastic surgery. His major work, The Surgery of Defects by Implantation, was published in 1589.

xxxxxAlso working on the circulation of the blood at this time was the Italian anatomist Hieronymus Fabricius (1537-1619), a man who greatly advanced medical knowledge. He taught William Harvey for five years, and his special study of the veins greatly assisted his pupil in his own research. As a student of Gabriel Fallopius, he also helped to found the study of embryology with his treatise On the Formation of the Fetus, written in 1600. In addition, he also did pioneer work on the structure of the eye and the larynx.