xxxxxThe Italian sculptor and goldsmith Benvenuto Cellini was a pupil of Michelangelo for a short time. Highly talented but something of a "rough diamond", he was invited to the French court in 1540, and it was here that he produced his masterpiece, a gold and enamel saltcellar for Francis I. Forced to leave on account of his unacceptable behaviour, he returned to Florence. Notable works there were the bronze bust of his patron Cosimo I de Medici, and his colossal bronze statue of Perseus, a feat of construction which was completed in 1554. Later, obliged to flee to Venice, he produced his Narcissus and Crucifixion. In his work many of his figures were elongated, marking him out as an exponent of Mannerism, a style of this period. His colourful autobiography provided a valuable picture of him and the times in which he lived. 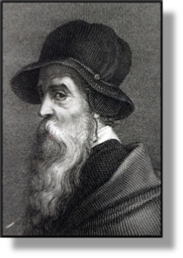 xxxxxThe Italian sculptor and goldsmith Benvenuto Cellini made some exquisite jewellery, but he was something of a rough diamond himself, albeit a very talented and courtly rough diamond. He was born in Florence and trained as a goldsmith, but was exiled at the age of sixteen because of his rowdy behaviour. He went to Rome in 1519, where he was a pupil of Michelangelo for a short time and worked for the pope, Clement VII. While in the city he was employed as the stamp master in the papal mint, and ended up serving a prison sentence for killing a rival goldsmith. He was absolved by the pope on this count, but later was imprisoned for embezzlement.

xxxxxIn 1540 he was invited to the French court, and it was during his stay there that he produced one of his masterpieces, an elaborate gold and enamel saltcellar for the king, Francis I (illustrated below). And it was here that he worked on the bronze relief of the Nymph of Fontainebleau, now in the Louvre, Paris. In 1545, having deeply upset the king's mistress by his unacceptable and eccentric behaviour, he was on the move again, this time returning to Florence. 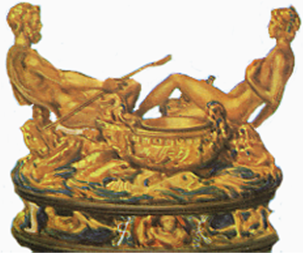 xxxxxIt was while in his native city, working for Cosimo de Medici, that, among many other fine works, he made the bronze bust of his patron and the colossal bronze statue of Perseus (illustrated below), completed in 1554 and now in the Loggia dei Lanzi in Florence. The casting of the huge statue of the Greek hero Perseus, triumphantly holding aloft the head of Medusa, was a rare technical accomplishment, but it almost ended in disaster. When filling the mould he began to run out of molten metal and had to throw all his pewter vessels - some 200 plates, pots and goblets - into the mixture to make sure the mould was completely filled! Other works of this period - some completed in Venice where he was obliged to flee to escape charges of immorality! - included the marble Apollo and Hyacinth, his Narcissus, and the marble Crucifix, later sent as a gift to Philip II of Spain, and now in the church of the royal monastery at the Escorial Palace near Madrid. 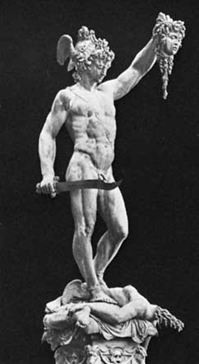 xxxxxHis exquisite array of ornaments, vases, coins and jewellery made him one of the leading sculptors and goldsmiths of the late Renaissance, though regrettably much of his jewellery and coins has been lost or melted down. He did however leave behind a gem of quite another kind: an autobiography, begun in 1558, which, apart from giving a frank, colourful and doubtless embellished account of his life, also provides a valuable picture of the times in which he lived. He died in Florence in February 1571.

xxxxxMany of his works, by means of elongated proportions and somewhat unrealistic poses (such as the figures in the famous saltcellar) mark him out as an important exponent of Mannerism. In this respect, and in the high quality of his technical achievement, he exercised a profound influence not only on his contemporaries in Florence, but also on the development of sculpture in the Fontainebleau school.

xxxxxIncidentally, Cellini was working for the pope during the notorious Sack of Rome in 1527. As one might expect, he sprang to the defence of the city, and claims that he was the one who shot and killed the Duke of Bourbon, the leader of the attack. As we have seen (1525 H8), during that dreadful sacking of the city, 4,000 inhabitants were killed, valuable art treasures were looted, and extensive damage was done to property. ……

xxxxx....... An adaptation of Cellini's autobiography was turned into an opera by the French composer Hector Berlioz. One of the least known of his works, it was performed at the Paris Opera House in 1838 and considered a failure. Later, however, his famous overture, Le Carnival romain, produced in 1844, was based on material from this opera.