xxxxxThe Italian monk Matteo di Bassi (1495-1552), becoming a Franciscan friar in 1511, was anxious that the movement should return to its strict rule of poverty. By 1525 he had attracted many followers by his preaching and simple life. In 1528, with the pope's approval, he became vicar-general of the Capuchins. This order numbered 17,000 within fifty years and had doubled in size by the 18th century. 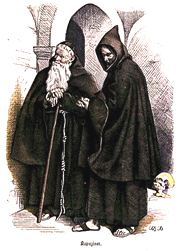 di Bassi became a Franciscan friar in 1511 and was ordained a priest about 1520. Anxious that his Order should return to the strict rule of poverty laid down by its founder, St. Francis of Assisi, he travelled barefoot and led an austere, simple life. By 1525 he had attracted many followers by his example and preaching, and in 1528 Pope Clement VII gave his approval to a reform movement. It was first established at Montefalco in Umbria. The rules of the order were drawn up and Matteo was elected the first vicar general of the Capuchins, so called because of the particular pointed hood worn by its friars, known as a capuche. Within fifty years the order numbered 17,000 and it reached its maximum of 34,000 in the middle of the eighteenth century. In its early years the movement was employed in support of the counter-reformation, but it has since played an important role in social and missionary work.

xxxxxSome ten years after the formation of the Capuchins, Angela Merici (c1470-1540), a Franciscan nun, founded a Roman Catholic order in Brescia, Italy, dedicated to the education of girls. Placed under the protection of Saint Ursula, its members came to be known as Ursulines. By the late 16th century the movement had become a monastic order, also caring for the sick and needy.

xxxxxSome ten years after the formation 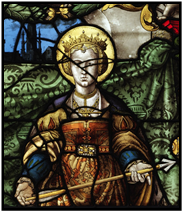 of the Capuchins, a Roman Catholic order was founded in Brescia, Italy, by Angela Merici (c1470-1540), a Franciscan nun. Dedicated to the education of girls, it was placed under the protection of Saint Ursula, a legendary Christian martyr of the 4th century and its members came to be known as Ursulines. Their major task was giving instruction in Christian doctrine and, in the early years, they remained in their families to carry out this work. By the late sixteenth century, however, convents were founded, and the movement developed into a monastic order tasked with the education of girls and the care of the sick and needy.

xxxxxAngela Merici was born in Desenzano 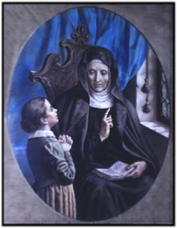 in the Republic of Venice in about 1472. After joining the Third Order of St. Francis, she returned to her home town in about 1492 and organised a group of young women to teach the catechism to the children of the village. In 1506, whilst at prayer, she had a vision and from then on dedicated herself to the founding of a society of virgins at Brescia. The aim of the society was to restore or strengthen family life by teaching young girls the Christian faith. She drew up the rules of the movement in 1536 and was elected the order’s superior the following year. She died in 1540 and was canonised (made a saint) in May 1807.