xxxxxAs we have seen the Union of Canada Act of 1841 (Va), based on the Durham Report two years earlier, united the two provinces of Quebec and Ontario. This was seen as the first step towards a federation, and so it proved to be. By the 1860s there was growing support for a system of government which would unite all the British possessions in North America. It was felt that this would help to avoid the continuing friction between the areas of Ontario and Quebec and, at the same time, provide a framework by which the vast, valuable areas of the west could be kept within Canada’s orbit. And economically, a larger home market would  greatly increase economic growth and provide work for a growing population. And there was also real fear that, without unity, parts of the country might well become prey to the United States. In 1864  delegates from the different regions - the Fathers of Federation - met and drew up 72 resolutions. The result was the British North America Act, passed by the British government in 1867. This provided a parliamentary system based on the British model and defined the division of power between the federal government and the provinces. Initially the Dominion of Canada comprised Nova Scotia, New Brunswick, Quebec and Ontario, but a number of areas were admitted into the federation in the 1870s, including the Northwest Territories and British Columbia. Newfoundland and Labrador, however, did not join until 1949. A federal system brought prosperity, but over the years the work of government was marred by the continuing conflict between the English and French communities.

THE DOMINION OF CANADA

Map (Canada): licensed under Creative Commons – https://gellertclass.wikispaces.com. Cartoon: from Grinchuckle, a Montreal-based satirical magazine, 1869, artist unknown – Library and Archives of Canada, Ottawa. Fathers of Confederation: by the English artist Rex Woods (1903-1987), who was commissioned in 1964 to make a replica – plus three additional figures! – of an oil painting by the Welsh-born Canadian artist Robert Harris (1849-1919), produced in 1884. This painting was  lost in 1916, when part of Parliament Buildings was destroyed by fire, but a black-and-white copy of the original painting, the work of the Irish-born Canadian photographer James Ashfield in 1885, was available in the Library and Archives of Canada, Ottawa. The painting shown here hangs in one of the committee rooms at Parliament House, Ottawa. The portrait on the far right is that of the original painter, Robert Harris. Map (Canada): licensed under Creative Commons – mci-11-canadianhistory.wikispaces.com. Riel: date and artist unknown – Archives Nationales du Quebec, Canada.

xxxxxAs we have seen, the Constitutional Act of 1791 (G3b) divided the British colony of Canada into two provinces along the line of the River Ottawa: Lower Canada (based on Quebec and mostly French speaking) and Upper Canada (based on Ontario and mostly English speaking), each with its own legislature. This division had been seen as necessary to preserve the political and social structure of the colony, threatened by a large French population - former citizens of what was “New France” - and the arrival during and after the American War of Independence (1775-83) of some 50,000 loyalists fleeing across the border from the “United States”. 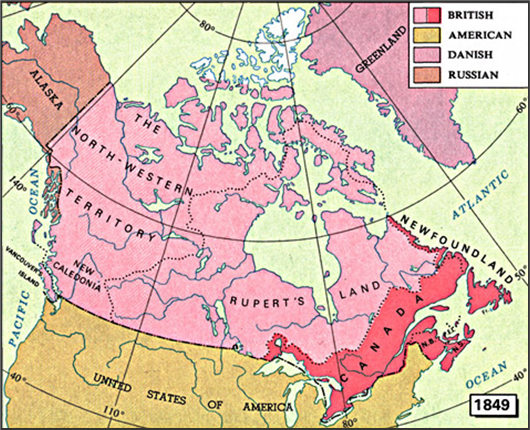 xxxxxThe Act of 1791 proved moderately successful for a number of years, but in both provinces political and social grievances simmered beneath the surface. Eventually revolts demanding political reform came to the boil in 1837, first in Lower Canada, where it was led by the politician Louis Joseph Papineau, and then in Upper Canada, where it was inspired by the leader of the Progressive Party, the Scotsman William Lyon Mackenzie. Both rebellions were short-lived and unsuccessful, but it stirred the British government to take a look at Canada’s outdated constitution. The result was the Durham Report of 1839. This proposed that the two provinces should be united, the colony should be given a measure of responsible government, and both former provinces should have equal representation in the legislative council, despite their difference in size. From this report emerged the Union of Canada Act of 1841 (Va).

xxxxxThis Act was seen as a first step towards the formation of a federation,  and so it proved to be. By the 1860s there was growing support within the colony for the introduction of a system of government which would unite and strengthen all of British North America in order that it might deal with the many problems, both internal and external, which had arisen since 1841.

xxxxxOn the political front, for example, there was constant friction in the Province of Canada, made up of the diverse areas of Ontario and Quebec. Conflicting policies there often led to political deadlock, and a federal framework was seen as a workable solution. Furthermore, there was much to be said for a system that would bring about a greater sense of unity and, at the same time, provide the means by which Rupert Land, the Western Territory and other isolated areas could be fully incorporated within the state. These distant regions were growing in population and economic strength and needed to be catered for politically if they were to remain within Canada’s orbit. Expansion was both desirable and necessary, assisted by the eventual building of a transcontinental railway.

xxxxxAnd there were gains to be made economically. Markets were beginning to dry up. The repeal of the Corn Law by the British government in 1846 had meant the loss of protective tariffs, and the American government’s decision in 1864 to rescind its trade treaty of 1854 - an agreement which had greatly eased trade restrictions - brought about the closure of lucrative outlets. A federation which incorporated the developing territories to the west would provide a much larger home market, greatly increase the prospects of economic growth, and provide work opportunity for the growing population in the present Union. And this substitute market would be the more readily developed by government purchase of the land currently held by the Hudson’s Bay Company. 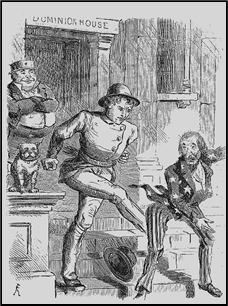 xxxxxAnd there was another consideration: Canada’s fragile relationship with its truculent neighbour to the south. The border between the two states had been eventually settled, but the American Civil War had reopened old sores. Britain had remained stubbornly neutral, and the Trent Affair of 1861 had embittered relationships. There were those in the United States, some in government, who believed in the doctrine of Manifest Destiny, the idea that the United States had the God-given right to occupy the whole of North America. The ardent expansionist William H. Seward, for example, the Secretary of State during and after the war, was known to have designs on Rupert’s Land, and it was he who engineered the Alaska Purchase in 1867.  A united and enlarged Canada would be a more viable deterrent should the United States, its civil war over, consider annexation. That possibility was probably unlikely, but it certainly played a key role in achieving a Canadian federation. The cartoon shows Uncle Sam being kicked out of Dominion House and John Bull in the background. 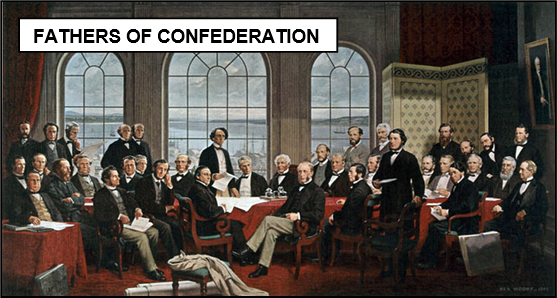 xxxxxThe first move towards federation was made by the Maritime colonies of New Brunswick, Nova Scotia and Prince Edward Island. Their leaders met at Charlottetown on Prince Edward Island in September 1864 to discuss a Maritime union, but, having been joined by politicians from the Province of Canada, were persuaded to consider a union of all British colonies in North America. The idea was approved in general and the delegates - the so-called “Fathers of Confederation” - met at Quebec the following month. There, despite the withdrawal of Prince Edward Island and Newfoundland, seventy two resolutions were adopted as a legislative basis for the establishment of a federation. 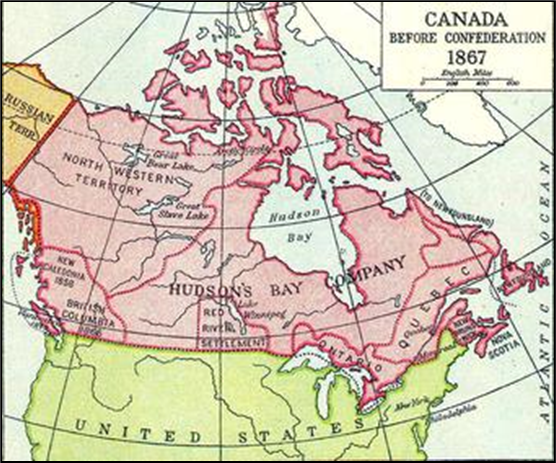 xxxxxA London Conference, convened in December 1866, translated the Quebec resolutions into the British North America Act of 1867 (now called the Constitution Act), thereby establishing the Dominion of Canada, comprising Nova Scotia, New Brunswick, Quebec, and Ontario. The Act provided a parliamentary system based on the British model, defined the division of power between the federal government and the provinces, and installed the means of justice and taxation. At this stage a strong central government was created in order to assist in the development of the western territories, to purchase land held by the Hudson’s Bay Company, and to start work on the building of a trans-continental railway to the Pacific coast. Foreign policy remained in British hands, but the federation was made responsible for the cost of its own defence, much to the relief of the British government.

xxxxxOnce established, the confederation embarked upon a programme of internal development and westward expansion. During the 1870s, the North West Territory (including Manitoba and Rupert’s Land), British Columbia and Prince Edward Island were admitted into the federation, and others joined over the next thirty years, but Newfoundland and Labrador did not become part of the Dominion of Canada until March 1949. Autonomy was greatly increased by the Statue of Westminster of 1931, and g

xxxxxThexcountry prospered under a federal system, but over the years the work of government has been marred by the continuing conflict between the English and French communities, exemplified in this period by an unsuccessful revolt in Winnipeg in 1869, led by the French-Canadian rebel Louis Riel (1844-1885). He was caught and hanged after leading a second rebellion in Saskatchewan in 1885. 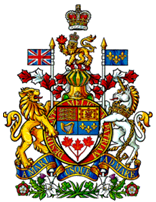 xxxxxIncidentally, the name “Canada”, which is spelled the same in the country’s two languages, English and French, is derived from the native Huron-Iroquois word kanata, meaning a village or settlement. The French explorer Jacques Cartier gave this name to the area around Quebec city in the 1530s, and it was later used as another name for New France, the former French possessions along the St. Lawrence and the Great Lakes. It was adopted by the British when they defeated the French in 1759. ……

xxxxx…… The Fathers of Confederation chose the title Dominion of Canada, having rejected “confederation” and “kingdom”. The idea came from the delegate for New Brunswick, Samuel Tilley, and was based on a line from Psalm 72 in the Old Testament. This reads: and He shall have dominion from sea to sea. This sentence provided the country’s title and motto, though the term Dominion is seldom used today. ……

xxxxx…… Canada Day, held on July 1st, commemorates the forming of the federation on lst July 1867. It is marked by parades, fireworks and parties. The current flag, the Maple Leaf, was adopted in 1964, and made its first appearance in February the following year. ……

xxxxx…… The British statesman Lord Carnarvon, the colonial secretary in 1866 and 1867, played a major part in the passage of the British North America Act. InxCanada the chief architect of the confederation was the politician Sir John Macdonald (1815-1891). As the country’s first prime minister he instigated the building of the Canadian Pacific Railway and, though accused of taking bribes over the contract and forced to resign in 1872, he was re-elected six years later and assisted in its completion in 1885. The building of the railway had proved an immense undertaking - over prairies, forests and swamps and through the mighty Rockies - but the last spike was driven home in November of that year. The Dominion was joined from “sea to sea” by the C.P.R.