xxxxxThe French church reformer John Calvin was a guiding spirit of the Reformation. In 1541 he established a puritan community in Geneva which adhered to a strict moral code in dress, personal behaviour and pious living. But whilst gambling, plays, dancing and the like were banned, improvements were made in education and the care of the sick, and a semblance of representative government was introduced. He began his major work, Institutes of the Christian Religion, in 1536. Revised many times, this called for a return to the purity and vitality of the Early Church. And it was here that he reiterated his doctrine of predestination whereby a Christian's fate was already predetermined by God. The Presbyterian Church he established was a blueprint for protestants throughout Europe, and no where more so than in Scotland, where, as we shall see (1560 L1), John Knox became the leading Calvinist.

xxxxxJohn Calvin was a French church reformer whose activities and writings made him the guiding spirit of the Reformation following on from the pioneer work of Luther and Zwingli. He spent much of his life in Geneva where, as the leader of the Reformation there, he established a religious community known for its strict moral code. It was a society without compromise. Dissenting Christians were often expelled, and in 1553 the Spanish theologian Servetus, opposing the concept of the Trinity, was burned for heresy. Conversely, he supported the Huguenots (the Protestants) in France and the English Protestants during the reign of their Roman Catholic Queen, "Bloody Mary".

xxxxxHe was born in Noyon, Picardy, and after studying theology and law, moved to Paris, where he made a name for himself as a preacher and laid the foundations of the French reformation movement. His first visit to Geneva was in 1536. Here he was persuaded to assist in the reformation, but the changes he introduced were considered too harsh and he was expelled. However, after a spell in Strasbourg, he returned to the city in 1541, and despite strong opposition, did succeed in setting up "Calvinism", a strict theological system which was seen by its adherents as the "the perfect school of Christianity". It was not perfect, however, in the eyes of many Genevans. As part of its regime, gambling, plays, dancing, swearing and the like were banned, and standards in both dress and personal behaviour were strenuously enforced. And conditions were made worse by the fact that his “City of God” was almost continuously threatened by Catholic armies and was virtually living under siege conditions. 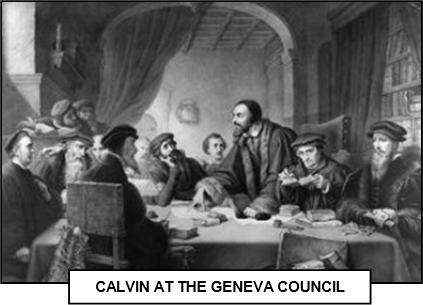 xxxxxWithin this protestant enclave, however, Calvin made many improvements. An educational system for all was developed, an Academy was established for the brighter students, hospitals were improved, special care was provided for the sick and poor, the city's sewage system was overhauled, and new industries were encouraged. In addition, the Presbyterian Church he established had within it the germs of representative government. All the church officers, for example, were elected to office by the lay members of the congregation.

xxxxxIt was in 1536 that he wrote in Latin his Institutes of the Christian Religion, a work he revised some five times. The first edition comprising just six chapters was addressed to the king of France, Francis I, an energetic persecutor of the Protestants. The final edition of 1559 contained no less than 79 chapters! From its beginning, this work marked Calvin out as the organiser and spokesman of Protestantism. Like Luther and Zwingli, he argued that the Christian faith began and ended in the study of the scriptures. A return was needed to the purity and vitality of the Early Church. And it was in this work that he returned to the idea of predestination, a doctrine holding that a person's ultimate fate is predetermined by God and can in no way be changed. Other writings included an influential catechism, commentaries on most of the books of the bible, a mass of correspondence on religious matters, and manuscripts of his sermons, many of which have survived.

xxxxxThroughout his life, Calvin never enjoyed good health. He died of a fever in 1564 and was buried in an unmarked grave in Geneva, the city he had served for twenty years and where he had been either loved or hated. Through his work, the Reformation become part of Western civilisation. His Presbyterian Church became a blueprint for protestants throughout Europe and, as we shall see (1560 L1), this was particularly the case in Scotland where John Knox became leader of the Calvinist reformation.

xxxxxA contemporary of Calvin was the Scottish Protestant reformer George Wishart (c1513-1546). He fled from Scotland because of his protestant views, but returned in 1543 and began preaching. He was arrested, convicted of heresy, and burned at the stake three years later. As we shall see (1560 L1), his teaching and death greatly influenced John Knox, who took up his leadership of the Calvinist reformation. 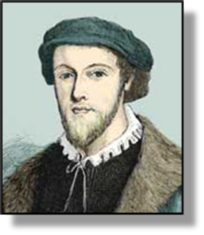 xxxxxWhile speaking of John Knox, mention must be made of a contemporary of Calvin, the Scottish Protestant reformer George Wishart (c1513-1546). He it was who laid the foundation of the Reformation in Scotland. He was born in Montrose and it was while he was a schoolmaster there that he was charged with heresy because of his protestant views. He fled to England and then to the continent, but he returned to his homeland in 1543 and began to preach in favour of Protestant reform. He was arrested, convicted of heresy, and burned at the stake at Saint Andrews in March 1546. Wishart was a close friend of John Knox and, as such, was instrumental in converting him to the Protestant faith. His teaching had a profound influence upon him and, following his martyrdom, Knox, as we shall see (1560 L1), became the key figure in the Scottish Reformation.