xxxxxThe Burton-Speke expedition to find the source of the Nile set out in 1857. Starting from the east coast of Africa, they managed to reach Lake Tanganyika in 1858, - the first Europeans to do so - but both men took time to recover from the journey. Eventually Burton, certain that the expedition had failed, decided to return to Zanzibar, but Speke journeyed further north and became the first white man to see Lake Victoria (as he named it). He was convinced that he had found the source of the White Nile, but on his return Burton disputed his claim and demanded proof. The row between them became worse when in 1865, having returned to London, Speke announced his discovery. Their dispute then became public and extremely bitter after Speke was appointed to lead another expedition to Africa to confirm his findings. He reached Lake Victoria and saw the falls by which the Nile made its exit, but Burton still questioned his claim. In 1864 a public meeting was arranged so that both men could argue their case, but the day before it was held Speke was killed in a hunting accident. Speke, like Burton, had served as an army officer in India, and they had explored Somalia together in 1854, only just escaping with their lives. He wrote Journal of the Discovery of the Source of the Nile in 1863 and What Led to the Discovery of the Source of the Nile the following year. Burton, unlike Speke, was a brash, daredevil explorer. Early in his career he had travelled widely in the Middle East, one time visiting the holy city of Mecca disguised as a Moslem pilgrim. After his African venture with Speke, he joined the British foreign office and served in West Africa, Brazil, Syria and Trieste. Accounts of his travels were later published in 21 books. A brilliant linguist with a declared interest in eroticism, he translated the Karma Sutra, The Perfumed Garden, and the Arabian Nights, a collection of old Arabic tales which included Ali Baba, Aladdin and Sinbad the Sailor. When he died, his wife destroyed all his diaries and papers, doubtless to avoid any further scandal. 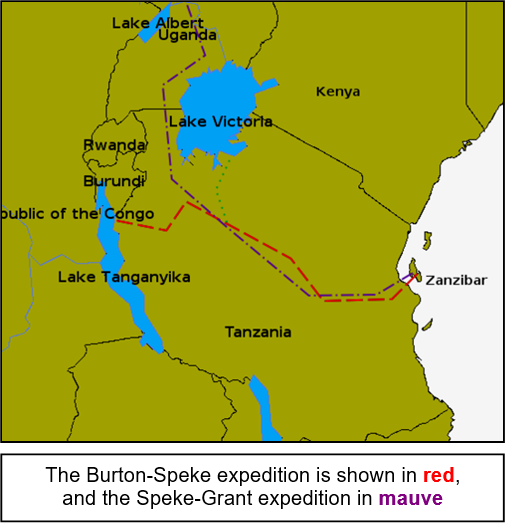 xxxxxIt was in 1857, after serving briefly in the Crimean War, that the English soldier and explorer Richard Burton joined up with his fellow countryman John Hanning Speke, in a second attempt to discover the source of the Nile. Sponsored by the Royal Geographical Society, they met on the island of Zanzibar off the east coast of Africa and then, sailing to the mainland, began their journey inland, hoping to find a large lake which, according to African hearsay, lay deep in the interior and was the source of the White Nile. The going proved extremely difficult. They followed jungle paths wherever possible, but the harsh terrain and climate took its toll. In February 1858 they became the first Europeans to reach Lake Tanganyika, but by that time both men were exhausted and seriously ill. Speke was virtually blind from sunstroke - a temporary condition as it so happened - and Burton was suffering badly from malaria fever.

xxxxxWhen both men had made a partial recovery, they chose to go their separate ways. Having been told by the natives that a river further to the north flowed into the lake and not out of it, Burton became convinced that their attempt was a failure. Despite hearing of another lake in the area, he decided to return to Zanzibar, recover his health, and organise another expedition. Speke, on the other hand, chose to continue the search. He explored to the north-east and, at the end of July, became the first European to discover the vast Sea of Ukerewe, the largest lake in Africa. Confident that he had found the source of the White Nile (as, indeed, he had) he named it Lake Victoria and hurried back to tell of his discovery. But in the absence of material proof, lost en route, Burton would not accept Speke’s conclusion, and a quarrel broke out between the two men. And this dispute was made the more bitter when Speke, returning to London before Burton, addressed the Royal Geographical Society and openly claimed to have discovered the source of the White Nile.

xxxxxAndxthe rift between the two men became even deeper in 1860 when Speke, now famous and widely respected, was chosen to lead another sponsored expedition to Lake Victoria, this time accompanied by his friend, the Scottish soldier and explorer James Augustus Grant (1827-1892). Burton, virtually ignored and unable to raise the funds for an expedition of his own, felt betrayed, and decided to go public, denouncing Speke’s claim in his Lake Regions of Central Africa, published in the year of Speke’s departure. Nor did the second expedition change his mind. Having reached Lake Victoria (see map above), Grant gave support to Speke’s claim and helped him to map part of the lake. Speke returned to London in 1863, travelling via the Sudan and naming en route the Ripon Falls - where the White Nile flowed out of the lake -, but once again Burton insisted that his claim was not proven because tribal warfare had prevented him from descending the river far enough to be sure that it was the Nile.

xxxxxTo settle the matter, it was eventually agreed that the two men should argue their case in public before the British Association for the Advancement of Science in September 1864. However, the day before the proposed debate Speke went out hunting and - so it would seem - accidentally killed himself when his gun went off and shot him in the chest. Burton, along with others, believed that he had committed suicide, but that was not the official verdict. 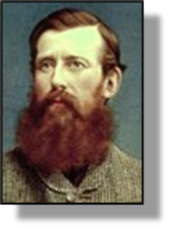 xxxxxThe expedition of 1857 was not the first time that Speke and Burton had explored together, nor quarrelled as a result. An officer in the British Indian Army since 1844, Speke had taken part in Burton’s disastrous expedition to Somalia in 1854, and had been stabbed several times when the party was attacked by a band of Somalis. They did not part the best of friends. On his final return to England in 1863, following his third expedition to Africa, Speke wrote his Journal of the Discovery of the Source of the Nile, and What Led to the Discovery of the Source of the Nile, published the year of his death.

xxxxxIn contrast to Speke, who was a quiet, well mannered man, Burton was an impulsive, daredevil explorer. A man of many talents, he had an adventurous and somewhat controversial career both before and after his expedition to Africa in 1857. He was born in Torquay, Devon, and after being expelled from Oxford University for bad behaviour, he joined the Bombay Native Infantry and served in India for some seven years. Then, anxious to go where no man had gone before, he travelled extensively in the Middle East, often disguised as a Moslem. He explored the Arabian peninsula and Somaliland, and in 1853 risked his life by visiting Mecca and Medina as an Afghan pilgrim, thus becoming one of the first Europeans to enter these holy Moslem cities. He then went one step further and paid a visit to the forbidden city of Harar in eastern Ethiopia. His expedition in 1855 to discover the 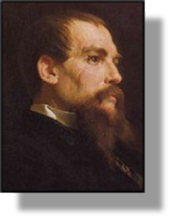 source of the Nile ended in failure but, as we have seen, in his second attempt, he and Speke became the first Europeans to reach Lake Tanganyika.

xxxxxBurton returned from Africa in 1861, travelling via Salt Lake City in the United States and Panama in Central America. Then, as a member of the British diplomatic service, he spent the next three years as the British consul at Fernando Po, off the coast of Nigeria, and was able to travel extensively in West Africa. Then came consular appointments in Santos, Brazil, Damascus in Syria, and eighteen years in the free port of Trieste. This variety of postings, together with his earlier exploration in the Middle East and east and central Africa, provided him with enough material for no less than 21 travel books. These included First Footsteps in East Africa, Wanderings in West Africa, and studies of Brazil, Paraguay, Syria, Zanzibar and the Mormons.

xxxxxIn addition, he wrote books on a number of other subjects, such as falconry and bayonet practice, and these were well received. However, using his skill as a brilliant linguist, his work as a translator raised a few eyebrows in the Foreign Office, and many more in Victorian society at large. In 1883, for example, he translated the Eastern erotic text Kama Sutra of Vatsyayana, and followed this by The Perfumed Garden three years later. And in earlier writings, notably those about his travels in West Africa, he tended to dwell on sexual matters, often of a perverse nature. It is probably for this reason that, following his death, his wife burned his diaries and unpublished manuscripts, destroying not only what was scandalous material, but also - unfortunately - notes that might well have been of geographical or historical interest. 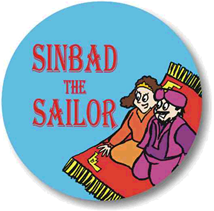 xxxxxAs far as his writing is concerned, Burton is probably best remembered today for his unexpurgated translation of The Tales of the Arabian Nights (sometimes known by his own title: A Thousand and One Nights), completed in 1888 and filling 16 volumes. This large collection of Arabic tales, probably based on stories handed down from the 10th century and originating in India, included such characters as Ali Baba, Aladdin and Sinbad the Sailor. Burton was knighted in 1886.

xxxxxThe tragic death of Speke in 1864 left in doubt the true source of the White Nile, but not for very long. The American journalist and explorer Henry Morton Stanley circumnavigated Lake Victoria four years after finding David Livingston at Ujiji in 1871, and an expedition led by the British officer Charles George Gordon (“Chinese Gordon”) - then governor of a province in the Sudan - had mapped the course of the upper Nile by the end of 1877.

xxxxxIncidentally, Speke discovered the Nile’s exit from Lake Victoria - called by him the Ripon Falls - in July 1862. He later wrote: “I saw that old Father Nile without any doubt rises in Victoria Nyanza (Lake)”. The Ripon Falls, which he named after the then president of the Royal Geographical Society, no longer exist. They were submerged as part of the construction for the Owen Falls Dam, a hydro-electric scheme completed in 1954. …… 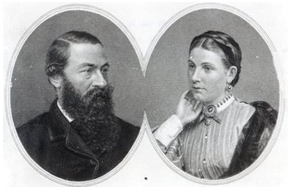 xxxxx……  Alsoxexploring central Africa at this time were the Englishman Samuel White Baker (1821-93) and his young Hungarian wife Florence (illustrated). In February 1863 they met Speke and Grant by chance at Gondokoro in southern Sudan and were told of another lake which was said to lie west of Lake Victoria. Using maps given to them by Speke and Grant, they explored further and after a long and hazardous journey discovered another expanse of water in March 1864. The first Europeans to see this lake, they named it Lake Albert in honour of Queen Victoria’s husband Prince Albert. Baker’s travels also took him to Ceylon, India, and the Middle East. Among the books he wrote were Eight Years Wandering in Ceylon in 1855, The Albert Nyanza in 1866, and The Nile Tributaries of Abyssinia, published the following year.