xxxxxThe First Anglo-Burmese War of 1824 (G4), and the Second of 1852 (Va), had given the British a valuable foothold in Lower Burma. Land was held along both sides of the Irrawaddy, and a number of ports were in their hands, including the capital Rangoon. The Third War was concerned with keeping to themselves the valuable markets they had made in the country, particularly in rubber and teak. By 1885 the French had won their war against the Chinese, and had gained control of Assam and Tonkin in central and north Vietnam. They were looking to extend their trade in the area. There was talk of a bilateral treaty between France and Thibaw, the King of Burma, and the possibility of the French building a railway from Mandalay to the Indian border. Alarmed at this development, the British accused Thibaw of unfairly fining a British trading company. When he refused to cancel the fines, they invaded northern Burma via the River Irrawaddy, and within two weeks had seized Mandalay and captured Thibaw. The king was exiled, and in January 1886 the whole of Upper Burma, together with Lower Burma, was made a province of India.

Map (Burma): Encyclopaedia Britannica. Inc. but licensed under Creative Commons – https://namu.mirror.wiki/veda. Mandalay: one of a series of photographs depicting the Third Anglo-Burmese War, produced by the English photographer Willoughby Wallace Hooper (1837-1912) in 1885, when then serving as a Lieutenant Colonel in the 7th Madras Light Cavalry. 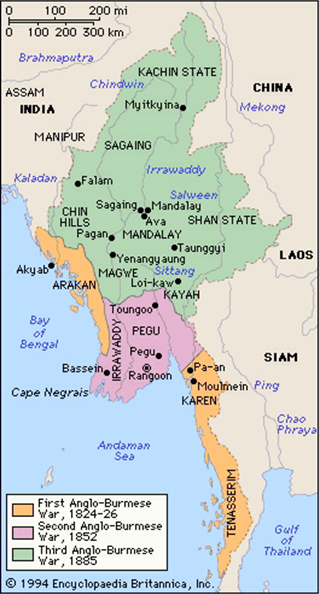 xxxxxAs we have seen, the First Anglo-Burmese War began in March 1824 (G4) (see map). The British captured Rangoon in the May, and, following their outstanding victory at Danubyu in April 1825, forced a settlement. By the Treaty of Yandabo in February 1826 the Burmese ceded coastal strips on both sides of the Irrawaddy delta and agreed to relinquish any claim to Assam. The Second Anglo-Burmese War, a short conflict in 1852 (Va), strengthened Britain’s hold on Lower Burma. A number of ports were occupied, including Rangoon.

xxxxxThese two wars gave the British valuable markets, particularly in rubber and teak. The third one was waged to protect and maintain these valuable markets. The French, having won their war against the Chinese in April 1885, and gained control over the Vietnamese areas of Annam and Tonkin, were themselves looking for trading outlets. Upper Burma, still a kingdom in its own right, was seen as a promising area. There was talk of a bilateral treaty between France and King Thibaw of Burma - a man anxious to demonstrate his political independence -, and, to further their cause, the French offered to build a railway from the capital Mandalay to the Indian border. The British were alarmed and they had cause to be. They needed to take action.

xxxxxThe casus belli - as far as the British were concerned - came towards the end of 1885 when Thibaw - via his ministerial council - imposed fines upon the Bombay Burmah Trading Corporation for illegally exporting teak from Upper Burma. The British, fearing that Thibaw was working in favour of a French company, denied the charges against the Corporation, and in October issued an ultimatum to the king demanding that the fines be rescinded. When it was rejected a British expeditionary force of 10,000, plus some 3,000 native troops, launched an invasion. The Third Anglo-Burmese War was under way. 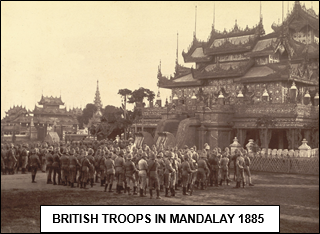 xxxxxHaving learnt from the earlier campaigns that, quite apart from tropical diseases, the jungle terrain was difficult fighting territory, the force made directly for the capital, Mandalay, by means of the River Irrawaddy. So rapid was the advance that the Burmese had no time to co-ordinate their defences. The British had taken Mandalay and captured King Thibaw within two weeks, and the war was virtually over a week later. The king was exiled, and in January 1886 the whole of Upper Burma, together with Lower Burma, was made a province of British India. This brought an end to the Konbaung dynasty, dating from 1752, and to Burmese independence, but there was fierce resistance to British rule, and this was not subdued until 1890.

xxxxxIncidentally, Burma was separated from India and made into a crown colony in 1937. Occupied by the Japanese during the Second World War (1939-1945), the country gained its independence in January 1948.