xxxxxIt was in 1571 that the Danish astronomer Tycho Brahe built a laboratory in a castle at Heridsvad Abbey. Here he discovered the new star of 1572 in the constellation of Cassiopeia, and rightly concluded that the comet of 1577 moved in an elongated orbit among the planets. In 1576 the King of Denmark and Norway had given him the use of Hven island, and it was here that he set up his famous observatory of Uraniborg. From this “Castle of the Heavens”, he and his team accurately positioned the five known planets and more than 700 stars. Data thus gained determined the length of a year to within less than a second, and led to the introduction of the Gregorian Calendar in 1582. Surprisingly, however, Brahe rejected the theory of Copernicus, regarding the Earth as the fixed centre of the world. In 1598 he published his Astronomiae Instauratae Mechanica, an account of his discoveries. He was later obliged to leave Uraniborg and go to Bohemia. As we shall see (1619 J1), when he died in 1601 his work was continued by his young student, the German astronomer and mathematician Johannes Kepler. 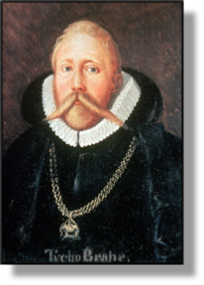 xxxxxThe Danish astronomer Tycho Brahe was born at Knudstrup in Skania (then under Danish rule). He was raised by his uncle Jorgen, and went to study law and philosophy at the universities of Copenhagen and Leipzig. However, having witnessed and been intrigued by the total eclipse which occurred in August 1560, he became passionately interested in astronomy, studying Ptolemy's Almagest in his spare time. With the most elementary instruments - initially a globe and a pair of compasses - he discovered a number of serious errors in the astronomical tables of the day, and set about correcting them. Later, these observations of the planets, accurately recorded, were to be the means by which the German astronomer Johannes Kepler was to prove that planets make an elliptical orbit of the Sun.

xxxxxOn the death of his uncle in 1565, he studied science at several universities and then in 1571 established a laboratory in a castle at Heridsvad Abbey. His break through came the following year, when he discovered the supernova of 1572,  an erupting "new star" in the constellation of Cassiopeia which was beyond the moon's orbit and remained visible for over a year. This find,  together with his conclusion that the comet of 1577 moved in an elongated orbit among the planets and was not confined to the Earth's atmosphere - as previously held by Aristotle -  brought him wide recognition and, dare one say it, "stardom". 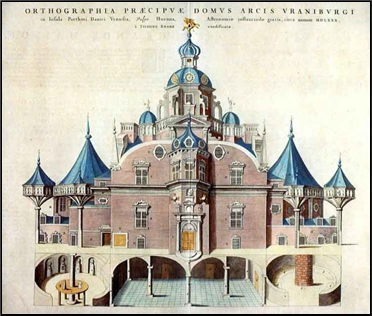 xxxxxIn 1576 King Frederick II of Denmark and Norway, anxious to keep the talented Brahe in his service, gave him the use of Hven, an island situated between Sweden and Denmark. It was here that, financed by the monarch, he set up his famous observatory of Uraniborg, his "Castle of the Heavens" (illustrated), which was to be his workplace for the next twenty years. Here - before the days of the telescope, be it noted - he and his team of assistants made highly accurate measurements of the positions of the five known planets and of more than 700 stars. And from this data he prepared revised tables based on the motion of the sun, moon and 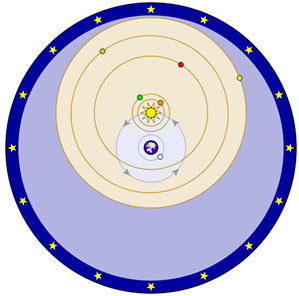 planets. It was by means of this precise information that he was able to determine the length of a year to within less than a second, and thus show the need for the Gregorian Calendar, introduced in 1582 with the loss of ten days! Even so, and perhaps surprisingly, he rejected the theory of Copernicus, arguing that the planets might well revolve around the Sun, but the Earth was the fixed centre of the world. His Tychonic system, as it came to be known, maintained (as shown in diagram) that the objects on blue orbits (the Moon, Sun and fixed stars) revolved around the Earth, and the objects on orange orbits (Mercury, Venus, Mars, Jupiter and Saturn) revolve around the Sun – all surrounded by a sphere of fixed stars, revolving around the Earth.

xxxxxWith the death of his royal benefactor in 1588, Brahe's fortunes changed. The new monarch, Christian IV, deprived him of his funds and, eventually, of his beloved observatory. In 1597 he moved to Bohemia and in the following year wrote his Astronomiae Instauratae Mechanica, a work in which he gives an account of his discoveries, and describes the instruments he used to make them. A later treatise gave the plans of 777 fixed stars and described the supernova that he had observed in 1572. His catalogue was the first to assign Greek letters to stars to indicate their relative brightness within their constellation. 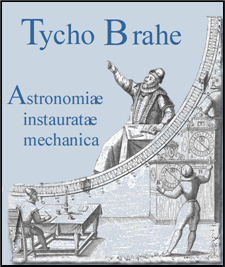 xxxxxIn 1599 he was appointed the imperial mathematician. Emperor Rudolf II gave him a pension, an estate near Prague, and the promise of another observatory. Unfortunately, he himself never saw his new "Heavenly Castle" fully completed, but his work was continued. In 1600 he was joined by his assistant, the young German astronomer and mathematician Johannes Kepler. When Brahe died in 1601, he inherited his large collection of astronomical observations and, as we shall see (1619 J1), made very good use of them.

xxxxxIncidentally, the observatory on Hven became a tourist attraction for the powerful and the inquisitive. Among the visitors to this "Castle of the Heavens" was James VI of Scotland, later to become James I of England. It is said that he was so impressed with the work being done there, and with Brahe himself, that he wrote a poem in his honour. By all accounts Brahe was a colourful character who used to wear a false nose made of metal to cover the loss of his own, cut off in a duel!