xxxxxThe Boxer Rebellion was a violent uprising aimed at driving foreigners out of China. Instigated by a secret society named The Righteous and Harmonious Fists (hence the title “Boxer”), and joined later by the government, it was the culmination of many years of mounting anger towards the ever growing influence of “foreign devils” in the commercial and political life of the country. As we have seen, the two Opium Wars of 1839 (Va) and 1856 (Va), by which foreigners gained land and trading concessions, had been followed by humiliating defeats on the battlefield in the Sino-French War of 1884 and the Sino-Japanese War of 1894. These events, plus drought and a series of floods, brought matters to a head in 1898. At first the Boxers, based in the North, directed their attacks upon the work of the missionaries, slaughtering thousands of Christian converts, but in 1900 they descended on Beijing, destroying foreign property and forcing all the foreigners to take refuge in the city’s Legation Quarter and Cathedral. It was eight weeks before an international force - the Eight Nation Alliance - arrived and raised the sieges. By the Peace of Beijing of 1901 China was forced to pay a large indemnity, but the country was kept intact, and in 1911, following the removal of the last emperor, became the Republic of China under its national leader Sun Yat-sen. 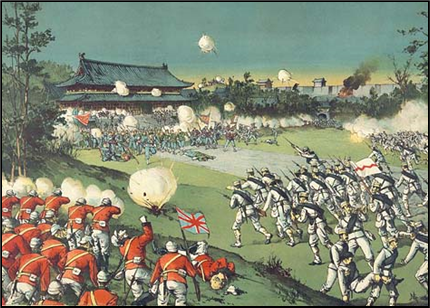 xxxxxThe Boxer Rebellion, a violent uprising by the Chinese government and people to rid their country of foreigners, began in 1898 and reached its climax in 1900. It was instigated initially by a secret society trained in the martial arts called I-ho Ch’uan - The Righteous and Harmonious Fists -, and it was from this title that the world press conjured up the name “Boxer” to describe the revolt. Thousands of Christian converts and a large number of Europeans were slaughtered before intervention by an international force - sent by the Eight-Nation Alliance - finally brought the uprising to an end.

xxxxxChinese opposition to the growth of European influence in the religious, political and economic affairs of their country had been mounting over many years. As we have seen, defeat in the two Opium Wars of 1839 (Va) and 1856 (Va) - and the “unequal treaties” that followed - had encouraged economic and political exploitation on a large scale by various European states, including Britain, France, Germany, Italy and The Netherlands. By the end of the century about 90 Chinese ports were virtually under foreign control, together with areas of sovereign land. These foreign enclaves, growing rich at the expense of Chinese trade, made their own laws, raised their own taxes and ran their own police forces. Their prosperity was in marked contrast to the poverty of the peasant-based Chinese economy.

xxxxxIn response to these indignities, the Manchu government attempted to modernise on the Western model, but the country was beset with internal strife, and the misery and poverty this caused only added to the resentment felt at the increasing growth of foreign interference. Then towards the end of the century, the country’s humiliating defeat in both the Sino-French War of 1884, and the Sino-Japanese War of 1894, together with a series of natural disasters - the constant flooding of the Yellow River and a serious drought in the North - brought matters to a head. Thousands of peasants, dispirited, homeless and hungry, sought to regain their land and improve their lot. 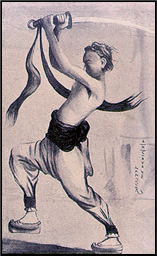 xxxxxThe uprising began in the northern province of Shantung, the stronghold of the I-ho Ch’uan. This secret society, which was possibly formed during the Taiping Rebellion of 1850 to 1864, was based on martial arts. Its members believed that by ritual and prayer they could achieve supernatural powers and become impervious to bullet and blade (illustration). They also convinced themselves that in their struggle against the “foreign devil” they would be supported by thousands of “spirit soldiers”, risen from the dead. At first, the bands of Boxers that spread out across the north-eastern provinces in 1899 directed their attacks against Christian converts - reviled for having abandoned traditional Chinese practices - and against the privileged Western missionaries who had come to spread an alien religion. By late 1899 thousands of converts and a large number of their clerical leaders had been slaughtered or forced to flee for their lives. By then, however, the rebellion had begun to widen its scope. Attacks started to be made against foreigners in general, and the symbols of their power - such as their buildings, churches and railways - became targets for destruction. The expulsion of all foreigners from China now became the aim.

xxxxxAtxfirst, the Ch’ing royal court, presided over by the Dowager Empress Wu Cixi (illustrated) opposed the rebellion, but such was the popular support given to the revolt that by early 1900 it was secretly supporting its aims, seeing the uprising as a means of reducing foreign influence and strengthening a dynasty that was near to collapse. Many government officials began to recognise the Boxer “rebels” as “Righteous and Harmonious Militia” and applauded their new slogan “Support the Ch’ing, Destroy the Foreigner”. But whilst the violent movement for change was strong in the north of the country, in the East and South a large number of provincial governors refused to support the Boxer Rebellion, and openly took measures to ensure the safety of the foreigners under their jurisdiction. This not only reduced the number of foreigners killed, but also made the overthrow of the uprising that much easier when the international community eventually came to take action. Indeed, had the rebellion been more widespread and united, the Boxers might well have achieved their aim.

xxxxxFollowing government support, some 140,000 Boxers, supported by elements of the Imperial army, descended on the capital, Beijing, in June 1900, and the uprising reached its climax. The race course was destroyed, churches, trading companies and hundreds of shops were attacked and looted, and two senior diplomats from the Japanese and German legations were murdered. Fearing for their lives, all foreigners, together with their Chinese staff and many Chinese Christians, were forced to take refuge in the legislative quarter, a fortified compound close to the Forbidden City. There, defended by a force of about 400 marines - summoned earlier from coastal garrisons - they managed to hold out for eight weeks, despite constant attacks. Meanwhile, a smaller number of foreigners and Chinese Christians sought safety in the city’s Roman Catholic cathedral, where some 40 French and Italian troops kept the rebels at bay. 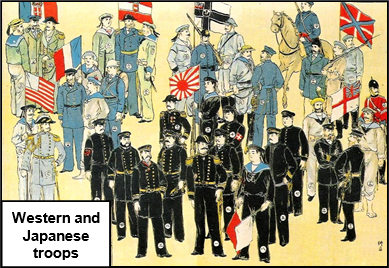 xxxxxToxmeet the crisis, an international force, some 45,000 in total, was quickly assembled and sent on its way to China. Named the Eight-Nation Alliance, it was made up of troops from Austria-Hungary, France, Germany, Italy, Japan, Russia, the United Kingdom, and the United States. The force, having seized the Taku forts on the coast and taken Tientsin, then marched on the capital and, arriving in mid-August, raised the siege of the Legation Quarter and the Cathedral. By way of revenge - it is estimated that some 250 foreigners were killed during the rebellion - many of the troops then went on the rampage. Boxers were sought out and executed on the spot, and the capital, including the Forbidden City, was pillaged and plundered.

xxxxxEmpress Wu Cixi, having fled to Xian, was quick to sue for peace, though fighting continued for some months in outlying areas. Byxthe Peace of Beijing, held in September 1901, China was forced to pay a large indemnity (around $333 million) over a period of 40 years. In addition, further commercial concessions were granted, and foreign nations were given the right to station troops to guard their legations in Beijing and the land route from the capital to the coast. 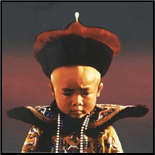 xxxxxThe failure of the Boxer Rebellion marked the beginning of the end for the Chinese Empire. In her final years Empress Wu Cixi, a ruthless conservative by nature, did make some attempt to introduce legal and education reforms, but by then China was a nation in name only. Vast areas of the country were in the hands of warlords or foreigners, and central government was near to collapse. When she died in 1908, she was succeeded by Pu Yi, a boy of 2 years and ten months (illustrated), who was destined to be the last emperor. Three years later the Republic of China was proclaimed under its national leader Sun Yat-sen, and the boy was deposed, bringing to an end 267 years of the Manchu Dynasty and two thousand years of imperial rule. 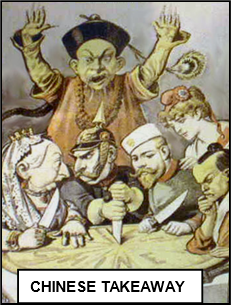 xxxxxAnd the Eight-Nation Alliance that put an end to the Boxer Rebellion was also short-lived. Within a matter of four years two of its major members were embroiled in the Russo-Japanese War - caused in the main by the Russian occupation of Manchuria during the Rebellion - and ten years later Germany was to find itself opposed by all its “allies”, save Austria-Hungary, in the First World War of 1914-1918. In the meantime the United States, an East Asian power through its acquisition of the Philippine Islands in 1898, called on all the allies to accept an Open Door Policy towards China. Put forward in 1900, this aimed to preserve America’s commercial interests in China - and those of other nations - by protecting the country’s territorial and administrative integrity. Britain supported this concept from the beginning, and Germany, Japan and Russia eventually agreed, thereby preventing the partition of China and the likelihood of future conflict between the trading nations.

xxxxxIncidentally, in 1908 the United States gave up most of its share of the Boxer indemnity, returning the money in the form of scholarships for Chinese students. Later Britain, France and Japan set up similar scholarship schemes.