xxxxxThe French rococo artist François Boucher was the greatest decorative painter of his day. Influenced by his teacher, François Lemoyne, Rubens, and his contemporaries Watteau and Tiepolo, his pastoral and mythological scenes - many remarkable for their study of naked female flesh - were much in demand. But he also painted charming domestic and countryside scenes, and his portraits were stunning and rich in detail. He was also an accomplished engraver and, via his court contacts, notably Madame de Pompadour, produced designs for the tapestry factories of Beauvais and Gobelins, and the porcelain works at Sèvres. He provided numerous decorative schemes for interior design, and at one time designed scenery and costumes for the theatre. In 1765 he was appointed director of the Royal Academy and first painter to the king. Some, notably the French art critic Denis Diderot, found his work superficial and lacking in good taste, but the rococo style, though on the wane, was successfully continued by his pupil, Jean Honoré Fragonard (1766 G3a), albeit with less emphasis on female nudity. 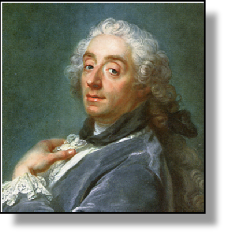 xxxxxHe was born in Paris, and lived most of his life in that city. At the age of 17 he became a pupil of François Lemoyne, an artist known for his lavish, exuberant style, but he left after a few months and, for a time, earned his living by making engravings of 125 of Watteau's drawings, and producing illustrations for an edition of Molière's works. In 1723, however, he won the Prix de Rome and, after a delay of four years - probably due to a lack of money or a reluctance to leave the good life in Paris - he travelled to Italy and, over the next three years, studied in Venice, Parma and Rome. On his return he worked hard to gain election to the Academy, and achieved his aim in 1734 with his Rinaldo and Armida, an "entry piece" which was more a close study of the female form than a lesson in classical literature! 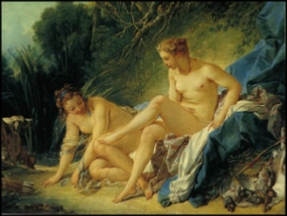 xxxxxIt was from this time that his dazzling career really took off. Over the next thirty years he produced hundreds of paintings. Many were pastoral and mythological scenes, facile and whimsical in style and mood, and often replete with feminine charms. Some, like the delightful Diana leaving her Bath (detail illustrated), Leda and the Swan, The Triumph of Venus, and Cupid a Captive, were sensuous by design and bordering on the erotic. And the same can be said of his beautiful nude studies, particularly The Odalisque, painted in the early 1740s, and his masterpiece Mademoiselle O'Murphy - a mistress to Louis XV and deserving of a place in the memoirs of the alleged "lady-killer" Giacomo Casanova. 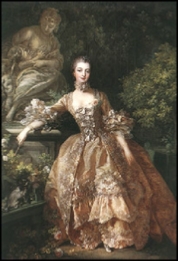 xxxxxBut it was not all naked flesh. His paintings also included some idealistic interpretations of country life, a number of domestic scenes (like Le Déjeuner of 1739), a series of pastels on the Four Seasons, and works with a religious content, such as The Adoration of the Shepherds. And he was also a fine figure artist. His portraits included the Woman with Muff, a charming study of his wife and principal model Madame Boucher, and a number of stunning, dignified portraits of his generous patron Madame de Pompadour - one of which can be seen in the Wallace Collection in London (illustrated), together with the decorative panels depicting gods and goddesses that he designed for her boudoir. The French painter Pierre Renoir is known to have admired his skill as a portrait artist.

xxxxxBut his paintings were only part of his contribution to rococo art at this time. Early in his career he had worked in the theatre on stage and costume design. In 1735 he received his first royal commission to work on the interior decoration at the Palace of Versailles, painting panels in t 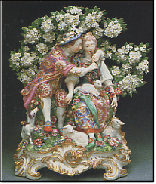 he public rooms and the Queen's boudoir. The contacts he made there, plus his close association with Madame de Pompadour, opened up a new field of activity. He was soon designing art work for tapestries produced at the royal factories of Beauvais and Gobelins - and working on designs for a range of small porcelain sculptures - such as clocks and figures of children - produced at the national ceramic works at Sèvres. Indeed, such was his standing that in 1755 he was appointed director of the Gobelins works and, ten years later, became first painter to the king and director of the Royal Academy. Two of the few examples of his interior work which have survived intact can be seen in his decorative scheme for the Salle du Conseil at Fontainebleau, started in 1753, and at Newby Hall, an Adam house in Yorkshire, England, where there are tapestries depicting the Loves of the Gods.

xxxxxBoucher probably met Giovanni Battista Tiepolo (1696-1770) when he visited Venice. A brilliant rococo mural artist, he gained prominence in the late 1630s, mainly due to his gigantic frescoes - remarkable for their sheer size and illusion of depth - and the soft, luminous colours which had been employed earlier by his fellow artist Paolo Veronese. His decorative schemes, depicting religious, historical and allegorical scenes, proved immensely popular among the wealthy and can be seen in churches, villas and palaces in Venice and throughout northern Italy. So successful was he that in 1750 he was invited to Wurzburg in Germany to decorate the Bishop's Palace. There he produced a colossal masterpiece of illusionism over the stairway, depicting the four known continents. He spent the last eight years of his life in Spain, where he decorated the royal palace in Madrid with huge frescoes. He produced a few portraits and a vast number of exquisite etchings and drawings, many of which are in the Victoria and Albert Museum in London. His painting was to have a marked influence on the French artist Jean Honoré Fragonard.

xxxxxBoucher's counterpart in Italy at this time was Giovanni Battista Tiepolo (1696-1770), an outstanding rococo mural artist whom Boucher probably met in Venice. He produced work on a monumental scale, and, being much in demand, his decorative schemes can to seen in churches, villas and palaces in Venice and throughout northern Italy. Among his patrons was the Doge himself, and the wealthy aristocratic Dolfin family. 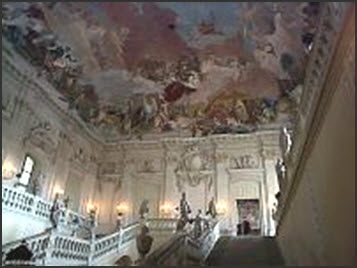 xxxxxBut vast though they were in size, these frescoes or oil paintings were in no way oppressive, due to his light, airy touch and his use of soft, luminous colours - a dazzling style which clearly showed the influence of his fellow Venetian artist Paolo Veronese. (Indeed, he was often referred to as the "new Veronese"). His paintings, depicting religious as well as historical and allegorical themes, covered vast areas of wall and ceiling space and, apart from their splendid figure drawing, pleased the eye with their dramatic depth of vision - an artistic illusion - and the grandeur of their impressive architectural backgrounds. 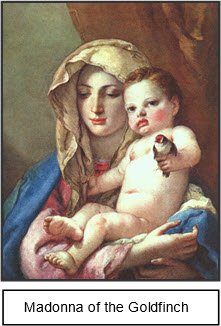 xxxxxIn his early years, some of his finest works were painted in the Lombard towns of Bergamo and Milan, and for villas in and around Venice. In 1750, however, such was his fame, that he was invited to the German town of Wurzburg. It was there, assisted by his two sons, Giovanni Domenico and Lorenzo, that he decorated the Bishop's palace with scenes of extraordinary beauty from classical mythology and German history – including episodes from the life of Frederick Barbarossa – and a colossal masterpiece of illusionism over the stairway depicting the four known continents (illustrated above). In 1762 he and his sons were invited to Spain by Charles III, and he worked there until his death eight years later. His major achievement here was his decoration of the recently completed royal palace. His work included The Apotheosis of Spain, a glorification of Spain's achievements, and, in the throne room, a magnificent ceiling fresco depicting Spain and Her Provinces. 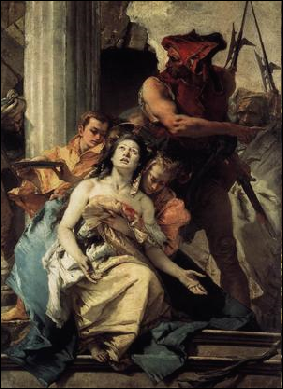 xxxxxAmongst his finest works are The Banquet of Cleopatra, painted for King Augustus III of Saxony, his historical frescos in the Villa Conarini (between Venice and Padua), his Triumph of Faith in the Church of the Pietà in Venice, and his scenes from Homer's Iliad in the Villa Valmarana at Vicenza - where his son Giovanni Domenico also produced some exotic rural scenes of his own. Outstanding among his oil paintings are his moving Martyrdom of Saint Agatha for the Benedictine nuns of Lendinara (illustrated), The Adoration of the Magi, for the Benedictines at Schwarzach, and The Stigmata of St. Francis, painted during his last years in Spain.

xxxxxTiepolo, who was married to Cecilia Guardi, the sister of the Italian view painter Francesco Guardi, was appointed director of the Venetian Academy in 1756. Aptly described by one of his contemporaries as "all spirit and fire", his output was phenomenal and, in contrast to his huge rococo frescoes, included a few portraits and a vast number of small sketches and etchings, all superbly executed. Many of his drawings can be seen in the Victoria and Albert Museum in London. His paintings were to have a marked influence on the French artist Jean Honoré Fragonard, and the Spanish painter Francisco de Goya.

xxxxxIllustrated here are his painting The Crucifixion (now in the Saint Louis Art Museum, Missouri), and two frescoes: The Judgement of Solomon and The Sacrifice of Isaac (both to be seen in the Patriarchal Palace, Udine, Italy).

xxxxxIncidentally, with the passing of the years, Tiepolo's fussy decorative paintings tended to fall out of favour in some quarters. The 19th century English art critic John Ruskin, for example, doubtless spoke for many when he described his work as but a reflection of the "moral decline" which was then under way in the Venice of his day.

xxxxxBoucher may be regarded as the most successful decorative painter of his day, but he was not without his critics. The pioneering art critic Denis Diderot, for example, who saw the purpose of art as inculcating moral virtue, launched a bitter attack upon him in 1765, declaring that his work was responsible for "the degradation of taste" and the "depravation of morals". Furthermore in France, the fussy rococo style, with its superficial treatment of serious subjects, and its depiction of a world divorced from reality, was soon to give way to neo-classicism. But not quite yet, as to be seen in the work of Boucher's talented pupil Jean Honoré Fragonard (1766 G3a).