xxxxxThe opening battles of the war, those of Lexington, Concord and Bunker Hill in 1775, gave much needed encouragement to the rebels. In addition, after an abortive attempt to capture Quebec and gain the support of the Canadians, they also succeeded in driving the British out of Boston in March 1776. In the south, however, it was another story. The British sent a large force to Long Island where they defeated the rebel commander George Washington. They then forced him out of Manhattan, trounced him at Chatterton Hill, White Plains, and chased him as he retreated southwards across New Jersey. With a depleted and irregular force, his chances of survival were slim. In December, however, the British went into winter quarters. Washington seized his chance. Crossing the Delaware River, he surprised and overwhelmed the Hessian garrison at Trenton, and then won the Battle of Princeton early in the New Year. These two victories kept the hopes of the revolutionaries alive until the tide turned in their favour later that year. There were to be further reversals but, as we shall see, rebel victories at the Battles of Saratoga in the autumn of 1777 were to provide a decisive turning point, changing the very nature of the conflict.

xxxxxAs we have seen, the three battles which opened the American Revolution in 1775, those of Lexington, Concord and Bunker Hill, gave a great deal of encouragement to the rebels. Their part -time militiamen had acquitted themselves well against the professional redcoats, particularly on Breed's Hill. They had proved capable of repulsing the enemy and inflicting heavy casualties. 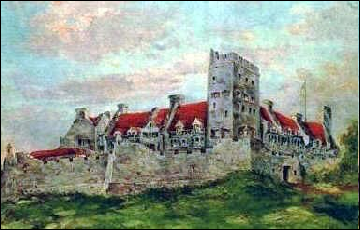 xxxxxBut even before the Battle of Bunker Hill, the colonists had taken military action as a step towards encouraging the Canadians to rise up in their support. In May 1775 they had attacked and captured the Fort of Ticonderoga (illustrated) in order to secure their route to the north. Then, later in the year, with the support of their new commander, General Washington, an expeditionary force was sent north via Maine in an attempt to capture Quebec and overthrow British rule. Led by General Richard Montgomery and Colonel Benedict Arnold it managed to reach the Canadian capital at the end of December, but the force proved totally inadequate to breach the city's fortifications. Montgomery was killed in the attack, and many Americans were captured. The Canadians, having acquired a measure of autonomy by the Quebec Act of 1774, gave little sign of support for their cause. 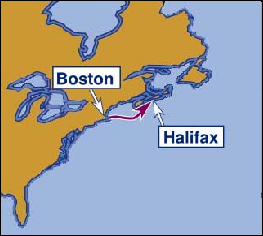 xxxxxInxMarch 1776, however, the revolutionaries achieved one of their major aims, the capture of Boston. During the winter months, by Washington's express orders, the cannon captured at Ticonderoga had been laboriously brought to Boston. Mounted on the Dorchester Heights overlooking the city - surprisingly not occupied by the British - it posed a convincing danger to the garrison below. On the 17th March General William Howe (1729-1814) evacuated the port and moved his troops to Halifax, Nova Scotia. With the fall of Boston, the British government took what it considered to be the necessary steps to crush the revolt. A large fleet and some 34,000 British and Hessian (German) troops were sent to New York. Its commanders, General Howe and his brother Admiral Lord Howe, were not given authority to negotiate. They could only accept unconditional surrender. 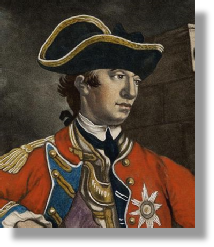 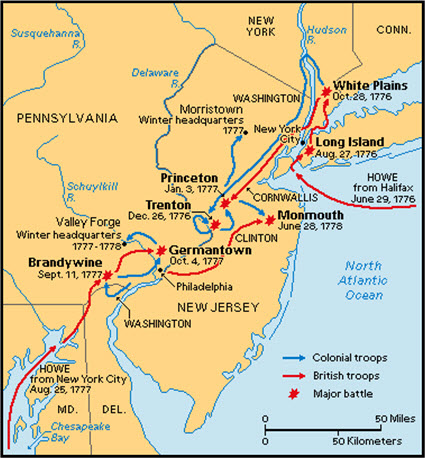 xxxxxTowards the end of August, Howe (illustrated) landed his troops on Long Island under cover of naval gunfire. In the ensuing Battle of Long Island, Washington, who had come south to defend New York, lost 1,000 men and was obliged to move the remnants of his army from Brooklyn to Manhattan under cover of darkness and a providential presence of dense fog. For the rebels, however, worse was to come. The following month Howe invaded Manhattan and drove Washington off the Island. Then, having caught up with and defeated the Americans at Chatterton Hill, near White Plains, he turned back and, in November, mounted a successful attack on Fort Washington, a rebel garrison on Manhattan. Here, he took some 3,000 prisoners as well as capturing guns and vital war supplies. Meanwhile, the British General Cornwallis, having overrun the rebel garrison at Fort Lee in November, began to drive Washington southwards across New Jersey. With an army of little more than 4,000 men, the rebel commander's chance of survival seemed slim indeed. "Without more men," he wrote at this time, "the game is up". 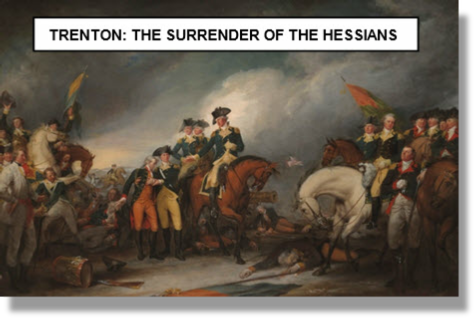 xxxxxBut true to form, General Howe did not press home the advantage he had so clearly won. Firmly believing that the winter was a closed season as far as fighting was concerned, he set up a chain of winter quarters in New Jersey and returned to New York. Cornwallis likewise was preparing to go home for a spot of leave. Washington, on the other hand, was planning a bold and brilliant stratagem. On Christmas night he crossed the ice-covered Delaware River with all his men and, as dawn came up, fell upon the Hessian garrison at Trenton on the west bank of the river. In a battle lasting no more than 45 minutes, he took some 900 prisoners for the loss of only four men. Cornwallis, duly alerted, recovered Trenton early in January 1777, and almost trapped the rebel force. Washington managed to evacuate his army during the night, however, and the next day won a battle against a British force at Princeton. This achieved, he took up winter quarters around Morristown.

xxxxxThe Trenton-Princeton campaign, fought under appalling conditions, not only saved the struggle for independence but, by its very nature, gave new life to what had appeared to be a hopeless cause. There were to be hard times ahead, but the victories won at Trenton and Princeton provided a psychological turning point. As we shall see, the military turning point came later in October 1777, when an entire British army was forced to surrender after the Battles of Saratoga.