xxxxxAs we have seen, it was in 1836 (W4) that the Great Trek really got under way in South Africa. On crossing the Orange River, the largest group of Boer Voortrekkers made for south Natal, but it was there that they were attacked by the Zulus, losing 500 of their members and most of their cattle. Two years later, however, led by Andries Pretorius, they met up with the Zulus on the banks of a tributary of Buffalo River. In the encounter that followed - known as the Battle of Blood River of 1838 - spears proved no match for guns, and the Boers won a resounding victory. They then established a republic in Natal, but in 1842 they were forced out by the British. On settling in The Orange Free State, the British again seized control, but abandoned the region in 1854, and the Boers were left to develop the area. Further north in The Transvaal, settlement was hampered for a time by rivalry between various Boer groups. Eventually, however, in 1852 Britain recognised the area as an independent Afrikaner state, and likewise accepted the Orange Free State two years later. Natal, however, remained in British hands.

xxxxxAs we have seen, it was in 1836 (W4) that the Great Trek really got under way in South Africa. Over the next six years it is estimated that some 13,000 Boers - the Dutch descendants of Cape Province - made their way north and north-east in search of fresh pasture and a homeland where they could follow their traditional way of life, free from British domination. Having crossed the Orange River and defeated the Ndebele in 1837, they split up into three major groups. The largest one turned eastward and made for south Natal and an outlet to the sea. Once across the Drakensberg Mountains, however they were confronted by the Zulus. They murdered the group’s leader Piet Retief, and then attacked the Boer camp, killing more than 500 of the Voortrekkers and stealing most of their cattle.

xxxxxAll seemed lost, but some of the Boers survived the attack and, joining up with newcomers from Cape Colony, they vowed to avenge the death of Retief and his followers. A force of about 500 strong, led by Andries Pretorius, went in search of the Zulus and met up with them on the banks of a tributary of the Buffalo River in December 1838. In the battle that followed spears proved no match for guns. Four Boers were wounded, but the Zulus lost about 3,000 men. Indeed, such was the scale of the slaughter that the River Ncome became red with the blood of the wounded and the dying, and the encounter came to be known as the Battle of Blood River.

xxxxxIncidentally, this defeat of the Zulus, led by their king Dingaan, is celebrated by the Afrikaners each year on the 16th of December. It is known as the “Day of the Vow” or “Dingaan's Day”. 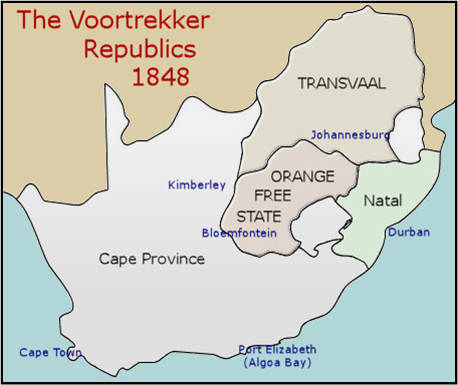 xxxxxFollowing this decisive victory, in 1839 the Voortrekkers established a republic in Natal, but their stay proved to be a short one. The British were anxious to stop the Boers from gaining access to the sea where they could make commercial contact with other European powers and become a threat to British interests in the area. Furthermore, they feared that this new republic of Natalia would drive out the native tribes and seriously increase the population in the eastern area of the Cape. As a result the British occupied Port Natal (today’s Durban) in 1842, and the following year annexed the territory of Natal as a Crown Colony.

xxxxxConfronted by this British show of force, the Voortrekkers were obliged to retreat over the Drakensberg Mountains. It was then that they moved north of the Orange and Vaal rivers into an area which, as we have seen, had been devastated by the Mfecane - that vast migration of tribal peoples caused by the campaign of expansion waged by the Zulu leader King Shaka some 20 years earlier. This region offered a fertile and largely uninhabited territory in which to settle, and it was here, as we shall see, that they established two republics, the Orange Free State and the South African Republic (later named the Transvaal).

xxxxxThe Orange Free State was set up in 1842. Like Natal it seemed doomed to failure when the local tribes opposed the Boers and sought help from the governor of Cape Colony. Despite resistance, led by Andries Pretorius, the British took over the territory in 1848, naming it the Orange River Sovereignty. In this case, however, as we shall see (1852), it was the British who took their leave. Finding the territory difficult to govern, and strongly opposed by the Sotho people, they eventually abandoned the territory in 1854, leaving it in the hands of the Boers. However, as we shall see, it was later to become embroiled in the Second Anglo-Boer War of 1899 to 1902.

xxxxxIn the Transvaal the development of an efficient administration was hampered by rivalry between the Boers themselves. Some 12,000 had already settled in the region by the late 1830s, and the arrival of newcomers from Natal in 1843 caused friction amongst the various leaders. In 1852 the British did eventually recognise the area north of the Vaal River as an independent Afrikaner state, but annexed the territory in 1877, and this led to the First Anglo-Boer War of 1880-1881.

xxxxxIncidentally, as noted earlier, the Great Trek is seen as the major historical event in the development of Afrikaner nationalism. To commemorate it, a huge monument, over 200 feet high, was built just outside Pretoria. Constructed over twelve years and completed in 1949, this massive building houses 27 marble panels and fifteen large tapestries, each one depicting an event which took place during the Great Trek, or a scene from the everyday life of the Voortrekkers. The picture of the Battle of Blood River, illustrated above, is one of the tapestries on show. …… 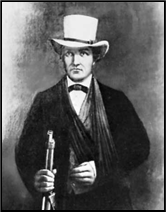 xxxxx…… Thexvictory at the Battle of Blood River owed much to the Boer leader Andreas Pretorius (1798-1883) (illustrated). He it was who, after the death of Piet Retief, raised a force of 500 to take on and defeat the Zulus. In 1840 he organised the Boer settlements in the Transvaal, but later fought unsuccessfully to stop the British taking over Natal and the Orange Free State. In 1852, however, he played a part in gaining independence for the Transvaal republic - via the Sand River Convention - and, two years later, the independence of the Orange Free State, though he had died before the Bloemfontein Convention made that official. The city of Pretoria is named after him. His son, Marthinus, was also a Boer statesman, and was the first president of the Transvaal, then known as the South African Republic. He failed in his attempt to unite the Transvaal and the Orange Free State.

State, and The Transvaal