xxxxxThe Prussian statesman Otto Von Bismarck entered politics in 1847 and soon made his name as a reactionary politician. He became prime-minister of Prussia in 1862, strengthened the army, and set about the task of unifying the German states under Prussian leadership. Taking advantage of every opportunity, and, in some cases, moulding events to suit his purpose, he seized the provinces of Schleswig-Holstein from Denmark in 1864, as we have seen, and then in 1866, on a trumped up excuse, waged a lightning war against Austria, the leader, at that time, of the German Confederation of 39 states. By Prussia’s victory at the Battle of Sadowa, Austria was expelled from the Confederation and the North German Confederation was instituted, commanded by Prussia and uniting all the northern and central states. However, the southern states remained independent and in order to gain their allegiance he saw a war with France as the only solution. Again, taking advantage of an opportunity - a dispute with France over the candidature for the Spanish throne - he provoked Napoleon III into declaring war. Once again the Prussian army showed its superiority, winning the Battle of Sedan in 1870, entering Paris, and forcing the French to capitulate. The German Empire, including the southern German States, was proclaimed in January 1871. From then onwards Bismarck attempted to protect Germany by a series of defensive alliances, but he fell out with Russia over Russian claims in the Balkans, whilst at home his reactionary measures alienated the Roman Catholic Church, socialists and liberals. When Wilhelm II came to power in 1888, he opposed Bismarck’s policies and, two years later sacked him. The “blood and iron” chancellor, the architect of the German Empire, retired to his estate and died there in 1898. 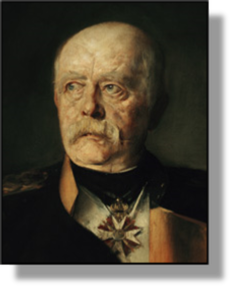 xxxxxThe German statesman Otto von Bismarck came to prominence as a politician in the late 1840s and was appointed prime minister of Prussia in 1862. He held this post until 1890 and, during his first ten years in office, pursued an aggressive foreign policy, aimed at bringing about the unification of Germany under Prussian leadership. As we have seen, he partly succeeded in this aim after waging successful wars against Denmark in 1864 and Austria in 1866. Four years later, in 1870, he completed the unification of Germany after defeating France in the Franco-Prussian War - a surprising and stunning victory. Now hailed as a national hero, he was created a prince and became chancellor of the German Empire, established in 1871. However, his cautious foreign policy thereafter and his reactionary policy at home - despite the introduction of some welfare schemes - found no favour with Emperor William II when he came to the throne in 1888. He dismissed the Iron Chancellor in 1890.

xxxxxBismarck was born at Schonhausen, near Berlin in 1815, the son of a nobleman. He studied law and after managing the family estates, he entered politics in 1847. In the popular uprising the following year he made a name for himself as an arch reactionary, and in 1851 was appointed as Prussia’s representative to the German Confederation, a loose organisation of thirty-nine states. Then after short periods as ambassador to Russia and France, he was appointed Prussia’s minister-president and set about the task of bringing about German unification. This, he argued, was not to be achieved by diplomatic negotiation, but by a policy of “blood and iron”. 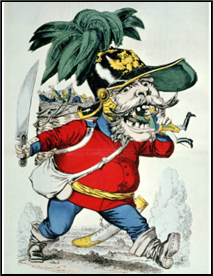 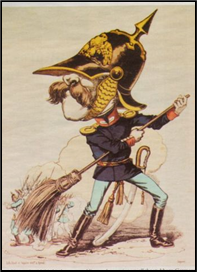 xxxxxTrue to his word - and fully confident in the capability of the large Prussian army he had helped to create - in 1863, as we have seen, he allied with Austria in a war to seize the provinces of Schleswig and Holstein from Denmark. The victory gained in 1864 gave him the opportunity he was looking for, a means whereby he could undermine if not eliminate Austria’s supremacy in German affairs. This was imperative if Prussia were to gain control of a united Germany. In the ensuing peace settlement he persuaded Austria to take control of Holstein. He saw this joint partnership over the administration of the provinces as a potential and, indeed, likely cause of disagreement with his powerful neighbour, and so it proved to be. Having prepared the ground by receiving a promise of neutrality from Napoleon III of France, and by gaining the military support of Italy - thereby ensuring that Austria would be obliged to fight on two fronts - Bismarck was ready to make his move. On a trumped up excuse over Austria’s governing of Holstein, in June 1866, as we have seen, Prussian forces invaded the province. Within a matter of days, Austria, supported by the majority of the German states, declared war on Prussia and its ally Italy.

xxxxxThe decision to take on the might of the Austrian Empire was indeed a big gamble on Bismarck’s part but, in fact, the Austrian forces, weakened by having to send troops in defence of Venetia (their surviving Italian possession), proved no match for the highly efficient Prussian army. Within a matter of seven weeks they were overwhelmed and their defeat at the Battle of Sadowa in July 1866 sealed their country’s fate. But the peace settlement that followed showed Bismarck’s political skill at its best. To the outside world it was both moderate and generous. Austria lost no territory - save for Holstein and Venetia - and no occupation was enforced. Closer to home, however, it was a different story. Austria was expelled from the erstwhile German Federation - thus ending its influence in German affairs - and the North German Confederation was instituted, commanded by Prussia and uniting all the northern and central German states. Therein lay the extent of Bismarck’s triumph. 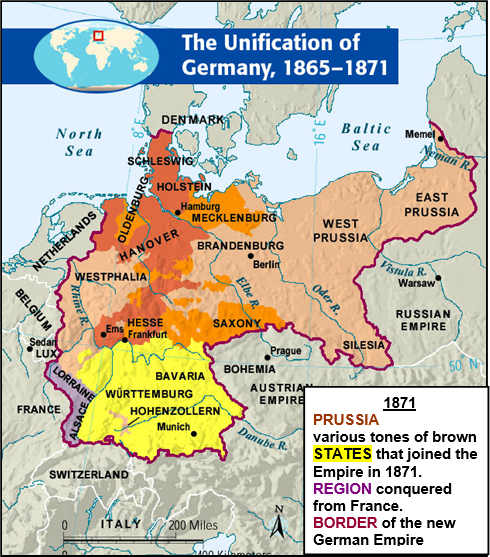 xxxxxBut the German chancellor was astute enough to realise that the remainder of the German states - those in the south - would only be won over to Prussia’s side when their national identity was under threat. A war with France would achieve this aim and, furthermore, if successful, would provide the new Germany with the secure boundaries it so badly needed. The opportunity for such a war - a foolhardy venture on paper given the recognised strength of French military might - came four years later with a dispute between France and Prussia over the candidature for the Spanish throne. As we have seen, by carefully doctoring the “Ems Dispatch”, a message from Wilhelm I to Napoleon III, he provoked France into the Franco-Prussian War. Once again the highly trained Prussian army, supported by forces from the German states, proved the decisive factor. It won a decisive victory at the Battle of Sedan, occupied Paris and forced the French to capitulate. The German Empire - including the southern German States and enlarged by the annexation of Alsace-Lorraine - was proclaimed at Versailles in January 1871. This was his finest hour. By taking advantage of every opportunity and, in some cases, moulding events to suit his own purpose, Bismarck had achieved his aim. The map of Europe would never be the same again, and the might of Germany was there to stay. (The cartoons above show Bismarck gobbling up or sweeping up his selected opponents!)

xxxxxCreated a prince, Bismarck now became chancellor of the German Empire. In foreign affairs he saw his major task as strengthening the Empire by a series of defensive alliances. However, as we shall see, his Three Emperors’ League with Russia and Austria in 1873 fell apart following fears over Russian ambitions in the Balkans (curbed at the Congress of Berlin in 1878), and, in the long term, his Triple Alliance of 1882 with Austria and Italy only served to create two hostile blocs in Europe, setting the scene for two world wars and, for many years, the division of the state he had worked so hard to create. Nor were his reactionary policies at home any more successful. His ruthless attacks upon the political power of the Roman Catholic Church and his severe restrictions upon the activities of the socialists and liberals eventually backfired, and he was obliged to make concessions.

xxxxxIn general, Bismarck showed very little interest in affairs outside of Europe. As we shall see, he did preside over the Congress of Berlin in 1884 (Vc), summoned to settle a number of colonial disputes, but his main concern at this international meeting was to support the French in their quest for overseas territories in the hope that this would placate them for the loss of Alsace-Lorraine! And it was with some reluctance that he agreed to the formation of the German Colonial League in 1882, an organisation which, over the next three years, managed to gain control of the Cameroons, German East Africa (Tanzania) and South West Africa (Namibia).

xxxxxWhen Wilhelm II (1859-1941) came to the throne in 1888 he made plain his dislike of what he saw as Bismarck’s cautious foreign policy, and he feared that his repressive measures at home would destabilize the state. The new German Emperor favoured a policy of colonial expansion and a large scale naval construction, the attributes, as he saw it, of a Great Power. The “blood and iron” Chancellor, the architect of the German Empire, was sacked in March 1890. He retired to his estate near Hamburg and died there eight years later.

xxxxxIncidentally, Bismarck was noted for his laconic statements. Here are just a few: …… When you want to fool the world tell the truth. …… A conquering army on the border will not be stopped by eloquence. …… Not by speeches and votes of the majority are the great questions of the time decided, but by blood and iron. …… Your map of Africa is really quite nice. But my map of Africa lies in Europe. Here is Russia and here is France, and we are in the middle. That’s my map of Africa. 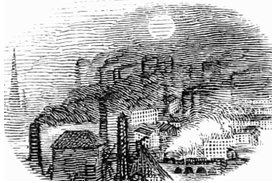 xxxxxPrussia’s military prowess was substantially aided by the Krupp Works. Friedrich Krupp (1787-1826) opened up a small iron foundry in Essen in 1811 and, as we have seen, his son Alfred Krupp (1812-1887) developed the business and began producing armaments from about 1847. Taking early advantage of the Bessemer steelmaking process, introduced in the late 1850s, the Krupp armaments factory became the largest manufacturer of armaments in the world. The company came to be known as "the Arsenal of the Reich" and Alfred as the “Cannon King”. By the time of his death his factory had armed nearly 50 nations.

xxxxxThe armaments produced by the Krupp Works - and particularly its field guns - played a particularly important role in the success of German forces during the Franco-Prussian War of 1870, and the company went on to serve Germany well in both the First and Second World Wars.