xxxxxAs we have seen, Charles ruled alone as from 1629, but in 1637 he ran into serious trouble with the Scots by trying to impose upon them the rules of the Church of England - including the appointment of bishops. It all smacked of Roman Catholicism to the Scots, so they took up arms in the first of the Bishops’ Wars. Charles marched north in 1639, but fearing his army was not strong enough, agreed to a peace settlement, and recalled parliament to raise more money. Not surprisingly, parliament would give no money without redress of grievances. The king quickly dismissed it, but in 1640 the second of the Bishops’ Wars broke out with a Scottish invasion of the north. Charles was forced to recall parliament to buy off the Scots, and this brought his personal rule to an end. The “Long Parliament”, as we shall see (1640), was determined to keep in power, setting the scene for a bitter conflict.

Post-Communion: contained in Pictures of the English Liturgy by the English church artist Martin Travers (1886-1948). 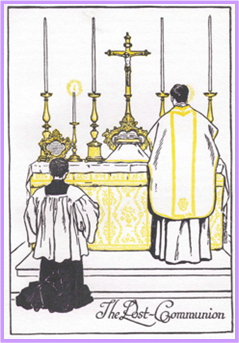 xxxxxAs we have seen (1629), Charles' attempt to rule alone was successful for some eleven years, despite widespread opposition at times to his heavy and unconventional forms of taxation. In 1637, however, he ran into serious trouble with the Scots when he decided to impose the English liturgy (set of Church rules) upon his northern kingdom. His wife, Henrietta Maria, was a Roman Catholic - always a point of concern for Protestants - and Charles himself was a member of the High Church of England, accepting in principle some of the ceremonial pomp of the Catholic Church and its method of rule via bishops.

xxxxxOn the other hand, since the English Reformation, and particularly in the reigns of Elizabeth I and James I, the Puritans (Presbyterians in Scotland) had long argued that the religious reforms had not gone far enough to rid the country of all vestige of the Roman Catholic Church. And a particularly hot potato in this respect was the continued existence of bishops in the government of the church (known as episcopacy). This above all smacked of Roman Catholicism. When in 1637 Charles, aided and abetted by his chief advisor the Earl of Strafford, tried to make the Scots conform to English church practice, it is hardly surprising that they rose up in revolt. It was an uprising which, in fact, was to bring about the English Civil War. By 1639 the king had raised a force of sorts and set out for the north. On reaching York, however, short of funds and not a little apprehensive about the quality of his soldiers, he decided that judgement was the better part of valour and negotiated a peace settlement, signed at Berwick-upon-Tweed in June. 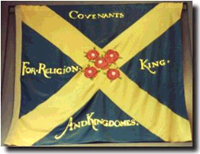 xxxxxThis truce brought an end to the first of the Bishops' Wars, but it was at this crucial point that Charles, desperate for money, decided to recall parliament, thus ending his eleven years of personal rule. This “Short Parliament”, as it was later tagged, summoned in April 1640, didn't last long. Not surprisingly, its members insisted on airing their grievances against the Crown before giving him any financial assistance. As a result Charles dismissed it the following month. But by now the Scottish Presbyterians had reopened their campaign (the second of the Bishops' Wars) and, having signed a Covenant promising never to accept bishops in their church, the "Covenanters", as they came to be called, invad 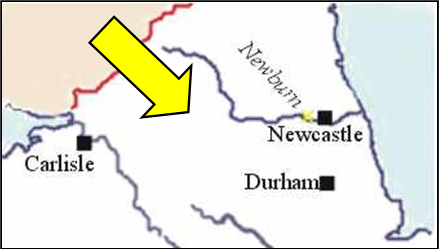 ed England and, defeating a force led by the Earl of Strafford, successfully occupied the counties of Northumberland and Durham. Now in even worse straits, the king, having agreed to make a money settlement with the Scots, had no alternative but to call another assembly. This “Long Parliament”, as we shall see (1640), was even more determined to assert its authority. The stage was set for a showdown in which neither the Commons nor the King were likely to give way.