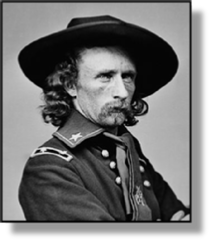 xxxxxCuster’sxfamous “last stand” took place on the 25th June 1876 at the Battle of The Little Bighorn in Montana. Colonel George Armstrong Custer (1839-1876), a distinguished Union cavalry commander in the American Civil War, and a seasoned campaigner in the fight against American Indians, was killed when his detachment of 210 men was overwhelmed and slaughtered by a combined force of Sioux and Northern Cheyenne, led by chiefs Crazy Horse (c1840-1877) and Sitting Bull (c1831-1890).

xxxxxIt was in late 1875 that the Sioux and Cheyenne Indians gathered in Montana to fight for their sacred land. The Black Hills in South Dakota had been granted to them in perpetuity by the U.S. government in 1868, but the discovery of gold in French Creek in 1874 brought an enormous flood of prospectors and miners into the area. Inxresponse, the government reneged on the agreement - made by the Treaty of Fort Laramie - and ordered all Indians to move onto their reservations by the end of January 1876. Totally opposed to this move, the Indians amassed a sizeable army and, having gained two victories over the U.S. Cavalry in the Spring of 1876, encamped in the valley of the Little Bighorn. Meanwhile, roving bands of Indians who had not signed the 1868 treaty and were opposed to the idea of reservations altogether, kept to the open plains and made sporadic attacks upon white settlers.

xxxxxTo force the Indians back to their reservations, the U.S. Army sent out three columns and these converged on the region in June 1876. Colonel Custer, in charge of the Seventh Cavalry Regiment, was under the command of General Alfred Howe Terry. In a plan to encircle the Indian encampment - though its exact location was not fully known - Custer was assigned the task of travelling up the Rosebud River and then crossing the Little Bighorn River so as to link up with the main body of troops, led by General Terry, at the junction with Bighorn River. On June 25th, however, Custer’s scouts 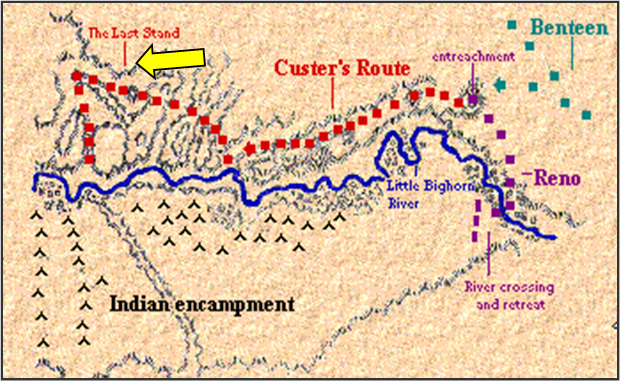 located a force of Sioux, and Custer discarded the plan. Though unaware of the strength of the enemy - which turned out to be well in the region of 2,000 - he decided to attack, dividing his regiment of 655 men into three columns: an assault force under his personal command, and two flanking columns led by Major Marcus Reno and Captain Frederick Benteen.

xxxxxReno’s battalion, about 175 strong, was ordered to attack the southern end of the large Indian encampment, but heavily outnumbered he was very soon suffering heavy casualties. As a consequence, Reno was forced to retreat in disorder to woodland along the river bank, and then cross the river to gain the relative safety of high ground. Here he came under further attack but, fortunately for him and his men, he was soon joined by Captain Benteen and his three companies, returning from a futile reconnaissance mission. This combined force, strengthened by the arrival of the pack train, managed to dig in and hold their ground until the main force under General Terry reached their position on the 27th.

xxxxxMeanwhile Custer had crossed further up the river and launched an attack upon the Indian encampment from the north. Like Reno, however, he found himself confronted with swarms of warriors. Outnumbered by about 10 to 1, and fighting hand-to-hand in rugged terrain, he was forced to retreat and take up a position on a high ridge running parallel to the Little Bighorn (arrowed on map). In the meantime an Indian force led by Crazy Horse had swiftly moved downstream and, doubling back in a wide arc, had cut off Custer’s line of retreat. Custer found himself virtually surrounded and with little or no hope of 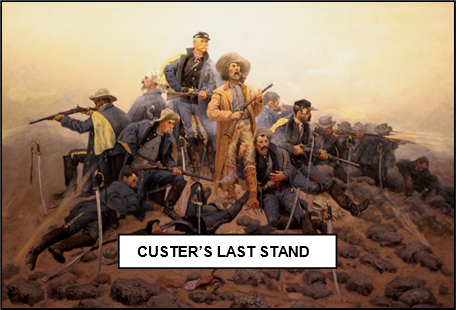 reinforcement. He had lost contact with General Terry and his own flanks; Colonel John Gibbon’s slow moving infantry brigades were still two days or more away; and, though he didn’t know it, the third column, commanded by General George Crook, had been turned back at Rosebud Creek by an Indian attack just a few days earlier.

xxxxxCuster and his men took what cover they could in a hollow formed in the high ground, but they were unable to use direct fire from this position and came under attack from showers of well-aimed arrows. Furthermore, many of the Indians had repeating rifles, whilst the cavalry had single shot carbines which tended to jam when overheated. Casualties slowly mounted. When the final assault came the men who still lived made a gallant last stand on a piece of high ground, but they were slaughtered (one would imagine) within the space of twenty minutes. The bodies of Custer and his men - most of them mutilated - were found by General Terry when he caught up with the 7th Cavalry. By then the Sioux, Cheyennes, and associated tribes had struck camp and begun to move away. 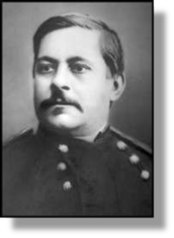 xxxxxIndianxaccounts of the Battle of The Little Bighorn confirm the bravery shown by the men of Custer’s last stand, but in the post-mortem that followed the event much criticism was levelled at the part played by Major Marcus Reno (1834-1889). Some accused him of cowardice, others of incompetence, and a number of both. However, an army court of enquiry, held in 1879, found his conduct to be without fault, and in 1967, after he had been cleared of later, unrelated charges, his remains were exhumed and he was reburied at the Custer Battlefield National Monument with full military honours.

xxxxxAs regards Custer himself, there was severe criticism of his conduct in some quarters. His decision to attack the Indian encampment in the first place, when he was not aware of the strength of his enemy, and his decision to divide his force of 655 men into three detachments - thereby increasing the odds against each - was seen as foolhardy if not madcap by a number of military observers. In fairness to Custer, however, it must be said that in his previous encounters, Indian forces had tended to put up a worthy fight but then make their getaway. The gathering of tribes at Little Bighorn, however, - six in number - had come to look for a full bloodied fight and on a scale never seen on the Plains before. But come what may, Custer is regarded as a national hero and is likely to remain so!

xxxxxIncidentally, as far as the U.S. military is concerned there was in fact one survivor from the Battle of Little Bighorn, a horse named Comanche. Owned by Lieutenant Colonel Myles Keough, he recovered from his wounds and lived for another seventeen years. During this time he toured the country with the 7th Cavalry, taking part in parades and patriotic events. On these occasions he wore a saddle but never had a rider. When he died he was preserved and put on display at the University of Kansas, where he can be seen to this day, (detail illustrated). ……

xxxxx…… The battlefield was established as a national cemetery in 1879, and as the Custer Battlefield National Monument in 1946. In 1991 it was renamed the Little Bighorn Battle National Memorial so as to include the Native Americans who died during the battle. To them, Little Bighorn is remembered as the Battle of Greasy Grass.

xxxxxAt his “sun dance” ceremony, held a month before the Battle of The Little Bighorn, Chief Sitting Bull had accurately predicted a stunning victory over the “blue coats”, but, ironically enough, this battle also proved to be the “last stand” for the American Indians themselves. Enraged by this defeat - then America’s worst military disaster - the U.S. government, seeking revenge, poured troops into the area. 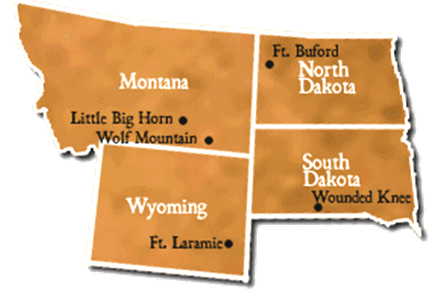 Many Sioux, including women and children were killed, and the Black Hills, the centre of the dispute, were placed outside the reservations and declared open to white settlement. And later that summer General Terry trapped some 3,000 Sioux in the Tongue River valley and forced all but a few back into their reservations. Crazy Horse finally surrendered to General Crook in May 1877 and was killed in a scuffle some four months later. Chief Sitting Bull, having spent four years in Canada, returned and gave himself up at Fort Buford, North Dakota, in 1881. He rejoined his tribe two years later.

xxxxxAs we shall see, the final end to Sioux resistance came in 1890 (Vc) with their defeat at the notorious Battle of Wounded Knee. This marked the end of 350 years of Indian Wars. 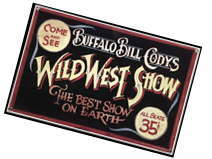 xxxxxIncidentally, in 1885 Sitting Bull spent some months on tour with Buffalo Bill Cody’s Wild West Show, earning $50 a week for his appearance, and a dollar or more for every picture he autographed! He was killed in the run-up to the Battle of Wounded Knee in 1890.

xxxxxCuster’s famous “last stand” took place in June 1876. The Sioux and other tribes had come out of their reservations in 1875 to protest against the horde of miners and prospectors entering the Black Hills, land which was sacred to them and had been granted to them by the government. Colonel George Armstrong Custer (1839-1876), commander of the 7th Cavalry, was given the task of searching out a large Indian encampment near Little Bighorn River. Having located the Indian village - or part of it - he decided not to wait for reinforcements. Unaware of the size of the Indian force facing him (well over 2,000) he divided his regiment - 655 strong - into three battalions and launched an attack. His own contingent attacked the settlement from the north and was quickly overwhelmed. Forced to retreat to high ground Custer was completely surrounded. He and his men put up a gallant fight, but all 210 were slaughtered in less than an hour. The other two battalions were likewise outnumbered, but managed to hold out on high ground until the arrival of larger forces. The Battle of The Little Bighorn was a stunning victory for the Indians, but it brought its revenge. U.S. troops poured into the area, pushing the tribes back into their reservations. As we shall see, Sioux resistance finally came to an end with their defeat at the Battle of Wounded Knee in December 1890 (Vc). This marked the end of 350 years of Indian Wars.