THE CONGRESS OF BERLIN - 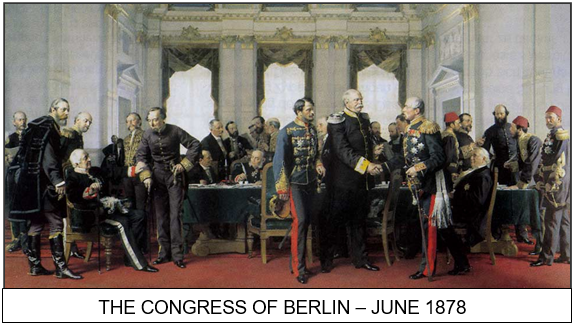 xxxxxAs we have seen, the Turkish occupation of the Balkans came under heavy attack from the mid-1870s onwards. Following violent uprisings in Bosnia and Herzegovina in 1875, Bulgaria broke out in revolution the following year, and in July both Serbia and Montenegro added their support by actually declaring war on Turkey.

xxxxxThese widespread rebellions were brutally crushed by the Turkish authorities. The Bulgarian Atrocities in particular were on a horrifying scale and brought condemnation throughout Europe. In England, for example, the retired statesman William Gladstone published a pamphlet demanding the withdrawal of Turkey from Bulgaria. But a conference held at Istanbul by the Great Powers, aimed at bringing about a settlement in the Balkans, achieved nothing. The Sultan would make no concessions. This failure gave the Russians their long awaited opportunity to gain influence, if not control, in this troubled region, and extend their authority to the straits of the Bosphorus and Dardanelles, the gateways to the Mediterranean from the Black Sea. As self-styled protector of the Orthodox Christians within the Ottoman Empire, the Tsar, Alexander II, declared war on Turkey in April 1877.

xxxxxThe advance of the Russian army into the Balkans, assisted by detachments from Romania and Bulgaria, met with stiff resistance, and there was heavy fighting - notably for Plevna and the Shipka Pass - , but by January 1878 the Russians had reached Adrianople (now Edirne), some 140 miles north-west of Istanbul. This alarmed Britain, France and Austria-Hungary. In Britain in particular, public opinion, orchestrated by the prime minister Benjamin Disraeli, swung violently in favour of the Turks. A popular music hall song at that time made it only too clear that, “by Jingo”, the British were ready and eager to go to war. And to add action to words, the British government sent six ironclads to the Middle East. By the time they reached the Sea of Marmora, the Russians had reached the village of San Stefano (now Yesilkoy), just six miles short of Istanbul. They could have gone on, but weakened by heavy losses - put as high as 200,000 - and not wishing to risk a war with Great Britain (not to mention France and Austria-Hungary!) they agreed to make a peace treaty on the spot.

xxxxxAs we have seen, during the Russo-Turkish War of 1877 the rapid advance of the Russian army towards Istanbul and the Straits of the Bosphorus and Dardanelles (gateways to the Mediterranean from the Black Sea) alarmed the western powers. Britain threatened war and sent six ironclads to the area. By then Russian forces had reached San Stefano, just six miles from Istanbul, but fearing war with Britain (and possibly France and Austria-Hungary) they stopped their advance and agreed to make peace on the spot. However, the terms of the Treaty of San Stefano in March 1878 gave Russia enormous influence, if not control, in the Balkans. It granted  independence to Romania, Serbia and Montenegro, and it established a “Greater Bulgaria” which covered more than half of the Balkan peninsula and was nothing short of a Russian satellite. The Great Powers would have none of it. They met in Berlin three months later (June 1878), and drastically amended the San Stefano agreement, cutting down the size of Bulgaria and giving territory back to the Turks in order to provide a counter weight to the advance of the Slav people. But the Congress of Berlin made no attempt to bring a lasting settlement to this troubled area. Indeed, by giving Austria-Hungary complete control over Bosnia and Herzegovina it prepared the ground for the Bosnian Crisis of 1908, an event which sowed the seeds of the First World War of 1914-1918.

xxxxxAs one would expect, the Treaty of San Stefano, agreed in March 1878, was highly favourable to Russia’s ambitions in the Balkans. The Slav states of Serbia and Montenegro, - both enlarged at the expense of Albania - were given their independence, along with Romania, and both Bosnia and Herzegovina were made autonomous principalities and promised widespread reforms by the Ottoman Empire. In addition, Turkey was to pay a large indemnity and to cede to Russia Armenian and Georgian territory in the Caucasus. The greatest gain for the Russians, however, was the establishment of a “Greater Bulgaria”, an autonomous principality of four million people which covered nearly half of the Balkan peninsula and stretched from the Danube to the Balkan Mountains, and from the Black Sea to the Aegean. This huge state (shown green on map below), understandably indebted to its creator Mother Russia, was to be occupied by Russian troops for the next two years. There is little doubt where Bulgaria’s loyalties were going to lie.

xxxxxThis blatant increase in Russia’s presence and influence in south-east Europe was totally unacceptable to the Great Powers in the west. Both Austria-Hungary and Germany greatly feared this extension of Slav nationalism in the Balkan peninsula, whilst Britain and France viewed with alarm the prospect of a Russian presence in the Near East and Mediterranean via the straits of the Bosphorus and Dardanelles. To avoid a repetition of the Crimean War, a meeting was quickly arranged at Berlin, under the chairmanship of the German Chancellor Otto von Bismarck, in order to amend the San Stefano treaty. There was a pressing need to curb Russian influence in the area and restore a measure of power to the Ottoman Empire as a counter weight to the growth of pan-Slavism.

xxxxxThe Congress of Berlin, attended by the European Great Powers and representatives from the Ottoman Empire, began its deliberations in June 1878, and had made substantial modifications to the San Stefano treaty in the space of a month. Of the 29 articles the agreement contained, 18 were either rejected or amended. The major changes concerned a drastic pruning in the size of Bulgaria. Seen as a potential Russian satellite, the area of the country was reduced by about two thirds. This was achieved by returning the south-western area (mostly former Macedonia) to Turkish rule, and establishing a new principality in the south. Named Eastern Rumelia (see map above), this was placed under the sovereignty of the Turkish sultan but was given a Christian governor. These changes confined Bulgaria to the region between the Danube and the Balkan mountains. 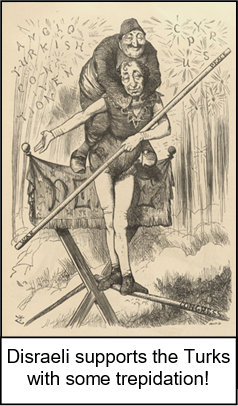 xxxxxAt the same time, the Congress agreed that Serbia, Romania and a much-reduced Montenegro should become independent, but concluded that Bosnia-Herzegovina should be administered by Austria-Hungary. Russia did obtain some territory from Turkey on the eastern coast of the Black Sea, but the revisions made to San Stefano treaty amounted to a serious and humiliating set-back to the growth of Russian influence in the area. Britain, on the other hand, was granted the control of Cyprus, thereby increasing British overall command of the Mediterranean.

xxxxxThe Congress of Berlin allayed the fears of the Great Powers concerning Russian aggrandisement, but it made little or no attempt to find a workable modus-vivendi based on the national aspirations of the peoples within the Balkans themselves. Indeed, it opened up the “Eastern Question” and served in some ways to make this region the “cockpit” of Europe. By permitting Austria-Hungary to occupy and administer Bosnia and Herzegovina, for example, it made possible the Bosnian Crisis of 1908 (when Austria-Hungary annexed the two territories), and this crisis helped sow the seeds of the First World War. In addition, the border between Greece and Turkey was left unresolved, leading to a brief war between the two countries in 1897, and Bulgaria, whilst never regaining the boundaries envisaged in March 1878, took over Eastern Rumelia when it gained its 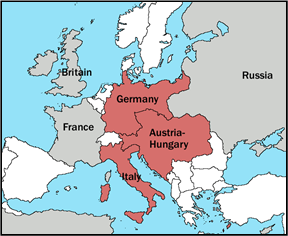 independence in 1908 and substantially increased its size.

xxxxxFurthermore, Russia’s obvious dissatisfaction with the terms of the Berlin Congress led to the disintegration of the Three Emperors’ League, formed, as we have seen, in 1872, between Russia, Germany and Austria-Hungary to counter the growth of liberalism in Western Europe. Feeling isolated and vulnerable, Russia eventually sought an alliance with France in 1894 (Vc), thereby creating two rival armed camps in Europe, and setting the scene for the First World War of 1914-1918.

xxxxxIncidentally, the phrase ”By Jingo” - meaning “by God or Jesus” - had its origin in the 17th Century, and appeared in a music hall song at the time of the Russo-Turkish War. The song became extremely popular in the war-fever of the time, and coined the term Jingoism - an expression of aggressive patriotism. The Russians were told:

We don’t want to fight but by Jingo if we do,

xxxxx…… For Tsar Alexander II, the man who, as we have seen, introduced the emancipation of the serfs in 1861(Va), the changes made to the San Stefano agreement by the Congress of Berlin constituted an international humiliation, and was but another nail in his coffin. The attempts to assassinate him were stepped up, and he was killed by a member of the People’s Will, an extreme populist movement, in 1881. Ironically enough, earlier on the day of his death he had signed a proclamation setting up a national consultative assembly, a first but nonetheless promising step on the long road to constitutional reform. ……

xxxxx…… As noted earlier, because of Russia’s prime role in bringing about Bulgaria’s independence from Turkish rule, Bulgaria still honours Alexander II as one of its “founding fathers”, and the date of the San Stefano Treaty - 3rd March - is celebrated as “Liberation Day”. ……

xxxxx…… The British prime minister Benjamin Disraeli represented Great Britain at the Congress, and on his return to England declared that he had brought back “peace with honour”. He could have added, “and Cyprus”! 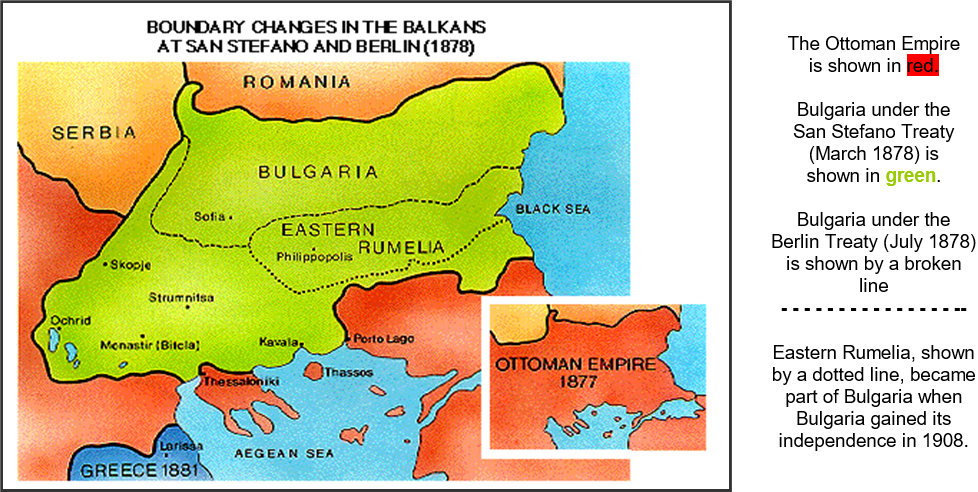