in the rainforest areas of southern Nigeria, probably began around 1309, and was destined to last into the seventeenth century. At the height of its power, as we shall see (1440 H6), it stretched along the coast from the Niger Delta to Lagos. It owed much of its success and prestige to an extensive trade in palm oil, spices and ivory, and it later became involved in the slave trade. 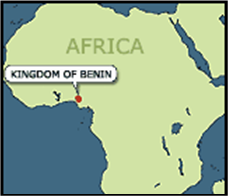 xxxxxRuled by a series of kings called Obas, the kingdom also gained a reputation for its brass and bronze sculptures and its carved ivories, many of which were looted with the coming of the Europeans towards the end of the fifteenth century. Today it forms a province of the modern state of Nigeria.

Map of Ancient Kingdom of Benin: courtesy of Pinterest.com