xxxxxThe scientist Alexander Graham Bell was born in Edinburgh, Scotland, but went to North America in 1870, and became a U.S. citizen in 1882. Born into a family which was well known for its pioneer work in elocution and speech training, he became deeply interested in this work, and in 1872 opened a school in Boston to train teachers in his father’s “Visible Speech”, a method which used a series of written symbols to teach the deaf to speak. The school proved highly successful, and in 1873 he was appointed professor of vocal physiology at Boston University. It was there, while working on a multiple telegraph, that he discovered the means by which sound could be transmitted by electrical impulses. With the help of an assistant, Thomas Watson, he perfected the idea and took out a patent in March 1876. The “telephone” was successfully demonstrated at an Exposition at Philadelphia later that year, and the Bell Telephone Company was founded in 1877 to promote this revolutionary break-through in communications. With the money made from his idea, Bell then set up research teams and, over the next forty years, produced many inventions, including a metal detector, an audiometer to test hearing ability, a metal jacket to assist breathing (the forerunner of the iron lung), and a wax recording cylinder which was a marked improvement on the metal foil cylinder used by Thomas Edison in his phonograph of 1877. Later in his career he made important advances in aeronautics, including the development of the aileron and the making of a hydrofoil speedboat. In 1888 he played a big part in the founding of the National Geographic Society, which became famous for its illustrated magazine. 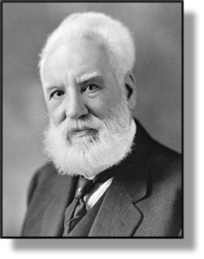 xxxxxThe scientist Alexander Graham Bell was Scottish by birth, but became a U.S. citizen in 1882. A man of rare ability and abundant energy, he made important innovations across a wide range of scientific research. Apart from the telephone, which revolutionized the world of communications in 1876, he invented the photophone, the audiometer, the wax recording cylinder and the induction balance, an instrument able to locate metal objects in the human body. And later in his career he made a number of important advances in the field of aeronautics, including the development of the aileron and the making of a hydrofoil speedboat.

xxxxxBell was born in Edinburgh, into a family which was well known for its pioneer work in elocution and speech training. Hisxfather, Alexander Melville Bell (1819-1905) had produced the Standard Elocutionist, a successful manual on this subject in 1860, and over the years had specialised on means of teaching the deaf to speak. The young Bell went to Edinburgh’s Royal High School, but he did not distinguish himself as a scholar, and left after two years to devote all his time to learning and developing the family profession. Like his two brothers, he was taught elocution and speech therapy by his father, and was introduced to his father’s “Visible Speech”, a method of teaching the deaf to talk by using a series of phonetic symbols to represent the different sounds produced by the varying positions of the tongue, lips and soft palate. Bell himself carried out a number of experiments to improve this system, and by the age of nineteen had become convinced that it would be possible to transmit speech by means of electrical impulses.

xxxxxFor a time Bell taught music and elocution in Elgin, and then in 1868 went to work at a school for the deaf in London. He attended University College, London, for a time, but in 1870 the death of his elder brother Melville from tuberculosis - following the death of his younger brother Edward from the same disease in 1867 - brought about a decisive change in his life. His parents, fearing that their remaining son might also succumb to the same illness, decided to settle near Ontario, Canada, where the climate was healthier. From there Bell moved to Boston, Massachusetts, in the United States, and set up a school to train teachers to teach the deaf to speak. The work there proved so successful that in 1873 he was appointed professor of vocal physiology and elocution at the Boston University School of Oratory. 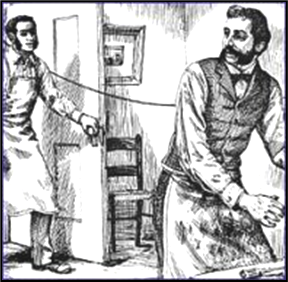 xxxxxIt was soon after this, whilst in the process of working on a multiple telegraph, that Bell discovered the means by which sound could be transmitted by electricity. Assisted then by a young competent technician named Thomas Watson (1854-1934), it took months of late-night sessions to perfect the idea, but in March 1876 the invention was patented. The patent said it all. It was described as a method and an apparatus for transmitting vocal or other sounds telegraphically “by causing electrical undulations, similar in form to the vibrations of the air accompanying the said vocal or other sounds”. Three days later Bell, via a wire and receiver, sent the first ever telephone message to his assistant in an adjoining room (illustrated). It was just nine words long - “Mr Watson, come here, I want to see you” - but those nine words ushered in an invention that was to revolutionize the world of communications by the end of the century.

xxxxxLater that year the apparatus was demonstrated at the Centennial Exposition in Philadelphia, Pennsylvania. This introduced the telephone to the world, and led to the establishment of the Bell Telephone Company. In 1879 this company acquired the carbon microphone - the brainchild of the 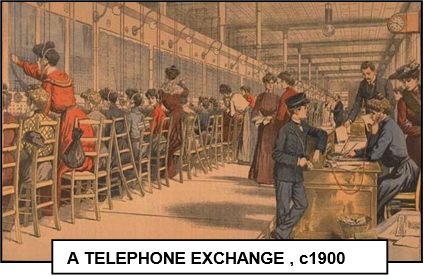 American inventor Thomas Edison - and this greatly improved the quality of the telephone, increasing its volume and giving it a much wider range. In less than ten years 15,000 people in the United States owned a telephone, and in 1892 the first automatic telephone switchboard was introduced, opening up a service between New York City and Chicago. As so often happens in such cases, the Bell patent was challenged more than 600 times over the next twenty years, but his claim was constantly upheld, though it was not legally recognised until 1893.

xxxxxWith the money now flooding in from his telephone system, Bell established a large research laboratory in Nova Scotia near his country retreat of Beinn Bhreagh (Gaelic for “beautiful mountain”) and in 1880, using the Volta Prize money awarded him by the Académie française, set up the Volta Laboratory in Washington DC. These institutions played a leading part in the research and development of a wide range of scientific improvements and innovations. His photophone, for example, transmitted speech via light waves, and his wax recording cylinder, patented under the term “graphophone”, proved a highly successful improvement over the metal foil cylinders used by Thomas Edison in his first phonograph of 1877. Later came the flat wax disc and the idea of impressing permanent magnetic fields on them as a means of reproducing sound. This idea was eventually abandoned, but it anticipated, in fact, the tape recorder, the hard drive and the floppy disc.

xxxxxOther devices invented included the induction balance - an electromagnetic device to locate metal objects, such as bullets or pieces of shrapnel in the human body (illustrated) -, a metal jacket to assist breathing (the forerunner of the iron lung), the means of desalinating sea water, an effective air-cooling system, and an audiometer to test hearing ability. Later in his career Bell turned his inventive mind to aviation and marine engineering and, together with a team of researchers, came up with a number of technical improvements. These included the introduction of the aileron - a wing flap assisting flight control -, a tricycle landing gear, and a hydrofoil boat which skimmed above the surface of the water and reached speeds above 70 mph - a high speed record that stood for ten years. During his lifetime he took out 30 patents, 18 in his name alone. 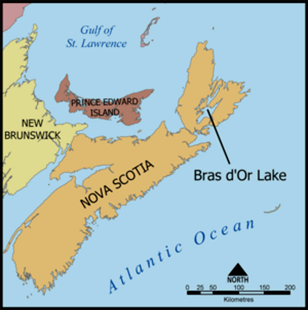 xxxxxBell died in August 1922, leaving a wife and two daughters. He was buried at the top of Beinn Bhreagh mountain overlooking Bras d’Or Lake, Nova Scotia (see map). Upon his death, telephones throughout the United States were stopped from ringing for one minute as a silent tribute to their maker. By then there were over 13 million telephones in service in the advanced nations across the world.

xxxxxAs noted above, Bell’s patent for the telephone did not go unchallenged. A number of scientists were working on the idea at around the same time. Among these, three need to be mentioned. ThexItalian inventor Antonio Meucci (1808-1889) was working on a voice communication apparatus as early as 1857. He filed an outline patent in 1871, but did not have the money - just ten dollars - to extend the caveat beyond 1874. Had he been able to pay the fee, a patent could not have been issued to Bell! In Italy he is regarded as the inventor of the telephone, and in 2001 and 2002 the American House of Representatives actually resolved that Meucci’s work towards this invention should be recognised. Likewise in 1860 Johann Philipp Reis (1834-1874), a German physicist, came up with an early version of the telephone that worked over a distance of 100 metres. It was demonstrated in New York in 1872 - where it was seen by Thomas Edison and probably Bell himself - but he was unable to obtain the financial backing to develop his idea. Andxthe American electrical engineer Elisha Gray (1835-1901) produced a device for transmitting “familiar melodies through telegraph wire” in 1874, but delayed announcing his invention of a telephone capable of transmitting voice sounds. As a result Bell’s patent was issued a few hours before Gray made his application.

xxxxxIncidentally, Bell was born with just one Christian name, Alexander, but at the age of eleven his father allowed him to adopt the middle name of Graham, chosen out of admiration for Alexander Graham, a Canadian who was being treated by his father and had become a close friend of the family. ……

xxxxx…… Bell’sxmetal detector was specifically made for President James Garfield (1831-1881) after he had been shot in July 1881 by a disgruntled lawyer, just a few months after taking office. The device failed to locate the bullet, however, because the metal bed frame rendered it inoperative! Had the president been lying on a wooden bed the bullet might well have been located and removed, thereby saving his life. This said, it is now believed that Garfield’s death through blood poisoning was simply due to the lack of hygiene during his treatment. He died in the September. ……

xxxxx…… Bell demonstrated his telephone to the renowned Irish scientist William Thomson (later Lord Kelvin), and to Queen Victoria at a private audience at Osborne House, her home on the Isle of Wight, 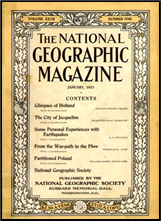 in January 1878. She found the device “most extraordinary”. Later in his career, however, Bell considered his famous invention to be an intrusion on his work and privacy, and he refused to have a telephone in his study! ……

xxxxx…… Bellxplayed a big part in the founding of the National Geographic Society. He was a member from its beginning in 1888, and he served as its president from 1896 to 1904. In the hands of his future son-in-law, Gilbert Grosvenor, its magazine gained worldwide fame as an illustrated journal about the geography of distant lands and the life of their peoples. …… 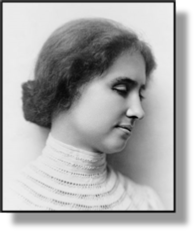 xxxxx…… One of Bell’s most famous pupils was the American Helen Keller (1880-1968) (illustrated), who came to him as a young child of six. Unable to see, hear or speak from the age of eighteen months - following an attack of scarlet fever - her dedicated teacher, Anne Sullivan (1866-1836), taught her to speak and write. Keller proved to be a most remarkable woman. Having obtained a degree from Radcliffe College, Boston, in 1904, she travelled the world to make money for the American Foundation for the Blind, and to improve the living and working conditions of blind people everywhere.