xxxxxThe Bayeux Tapestry was unlikely to have been made in Bayeux and it is certainly not a tapestry but, this apart, it is an amazing piece of work, providing as it does a detailed pictorial record of the invasion of England by William the Conqueror and the Battle of Hastings in 1066. It is really an embroidery on linen, sewn with woollen threads in a number of colours, including bright blue, red, green and yellow. It is about 20 inches (50cm) wide and measures a staggering 231 feet (70m) in length. It depicts 72 separate scenes in all and some are described in Latin script. 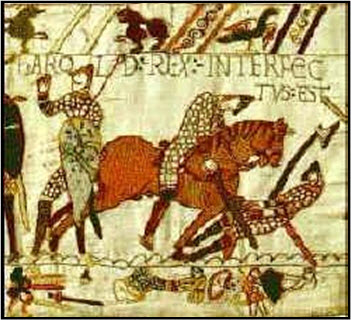 xxxxxIt is generally said that Harold died from being struck in the eye by an arrow, but this assumption has come about simply because the name Harold is written over that soldier's head. In fact, Harold could well be the figure to the right, falling to the ground after receiving a blow from the Norman horseman.

xxxxxTradition has it that it was Matilda, the wife of William the Conqueror, who worked on and supervised the production of this gigantic "cartoon". This idea is generally discounted today, but she was a remarkable woman. While her husband was away in 1066 she acted as Regent and governed the Duchy well. This was no mean feat in such troublesome times. 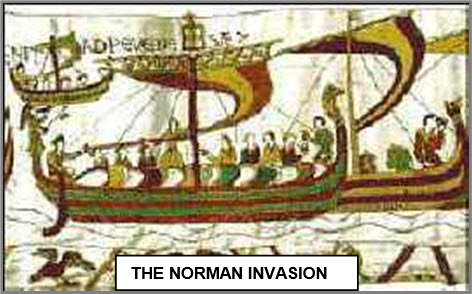 xxxxxWhat probably is true is the general belief that the work was commissioned by William's half-brother, Odo, Bishop of Bayeux. He did well out of the invasion of England. For his services at the Battle of Hastings he was appointed Earl of Kent and became the owner of vast estates. He acted as Regent, together with William FitzOsbern, when William returned to Normandy in 1067, and it was possibly about this time that he commissioned the tapestry for the dedication of Bayeux Cathedral, held in 1077. He appears in some of the later scenes of the tapestry, as do some of his close friends. He was banished from England in 1088 for supporting a revolt against the then monarch (William II) and died at Palermo, Italy, in 1097, while taking part in the First Crusade.

xxxxxIt must be added, however, that some historians, while accepting the part played by Bishop Odo and, incidentally, supporting the idea that the tapestry was made in England, suggest that it might not have been completed until 1092. 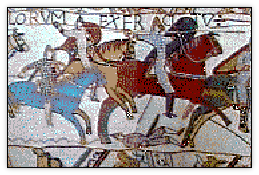 xxxxxWhatever the date of origin, the tapestry has had an eventful existence. The first reference to it was made in 1476, when it was seen on display in the nave of Bayeux Cathedral. But it was not until 1730 that a French scholar, Bernard de Montfaucon, published a copy of it. Then, having narrowly escaped destruction during the French Revolution, it was put on display in Paris in 1803-1804 - at the wish of Napoleon - before eventually being returned to Bayeux.

xxxxxWhat can be said with certainty is that the tapestry is now attractively exhibited at the Bayeux Museum and is well worth a visit. It is of particular interest to military historians and it is an outstanding work of art. In addition, its decorative borders have assisted in the study of medieval fables.

xxxxxThis embroidery on linen, about 20 inches (50 cm) wide and no less than 231 feet (70m) long, provides a pictorial record in 72 separate scenes of the Norman invasion and the Battle of Hastings in 1066. Tradition has it that Queen Matilda, wife of William I, worked on and supervised the production of this "cartoon". However, it is more likely that it was commissioned by William's half-brother, Bishop Odo of Bayeux, possibly in time for the dedication of Bayeux Cathedral in 1077. Others argue that it was made in England and not completed until 1092. Whatever its origin, it has had an eventful existence. It came near to being destroyed during the French Revolution and, at the command of Napoleon, was put on display in Paris in 1803-4 before being returned to Bayeux.