xxxxxFollowing the Treaty of Paris of 1763 which concluded the Seven Years' War, the Austrian leader Maria Theresa turned her attention to home affairs, but her son, Joseph, who shared government with her from 1765, had other ideas. In 1772, for example, he took part in the First Partition of Poland with Prussia and Austria, and seized control of Galicia. Then, five years later, he dragged the country into the War of the Bavarian Succession. With this country's throne in dispute, he claimed and invaded Lower Bavaria in 1778. But this was opposed by Frederick the Great of Prussia. He declared war on Austria and the following year, concerned at the turn of events, Maria Theresa wrote to Frederick and sued for peace. The result was the Treaty of Teschen, a diplomatic victory for the Prussians. Austria received but a small strip of Bavaria. In 1785 Joseph made another attempt, this time claiming the whole country, but he was forced to climb down when Frederick formed the League of German Princes against him. 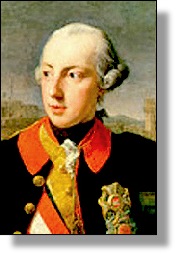 xxxxxAs we have seen, in the 1740s the redoubtable leader Maria Theresa had managed to hold on to her throne during the War of the Austrian Succession. However, by the Treaty of Aix-la-Chapelle in 1748 she had been forced to cede Silesia to Prussia, and later failed to recover this wealthy province during the Seven Years' War which ended with the Treaty of Paris in 1763. But this settlement proved a watershed in her policy. She then reluctantly accepted the loss of Silesia, pursued a policy of peace, and turned her attention to her domestic affairs. Two years later, however, with the death of her husband, she decided to share government with her son, named Emperor Joseph II (illustrated), and he had very different ideas on foreign policy. In 1772, for example, after negotiating with Prussia and Russia, he took part in the First Partition of Poland. Austria gained Galicia by this tri-partite settlement, but his pious mother regarded this as an underhand agreement. Then five years later, eager to expand the empire westward and increase Austria's political status, he literally dragged the country into the War of the Bavarian Succession. 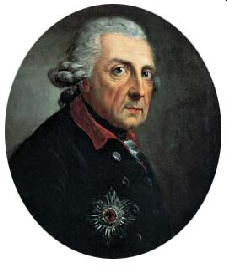 xxxxxThe ruling dynasty of Bavaria came to an end in 1777 with the death of its elector, Maximilian Joseph. The new ruler, the elector of the Palatinate Karl Theodore, without a legitimate heir and with little interest in his newly acquired territory, agreed to a plan proposed by Emperor Joseph by which Lower Bavaria was ceded to Austria. Claiming this area to be land formerly controlled by Austria, Joseph sent in an occupation army. But to Frederick the Great of Prussia (illustrated), anxious as ever to restrict the power of the Habsburgs, this take-over was totally unacceptable. Supporting the rival claim to these lands put forward by Charles, duke of Zweibrucken, he declared war on Austria in July 1778. There followed a succession of skirmishes, none of which proved decisive, and eventually Maria Theresa, who had agreed to her son's action with great reluctance, went over his head and, writing directly to Frederick, sued for peace. WithxFrance and Russia acting as mediators, an agreement was reached at the Treaty of Teschen in May 1779. By it, the Prussians gained a diplomatic victory. The Austrian government was obliged to give up its claim to the Bavarian territory - save for a narrow strip along the east side of the River Inn (the Innviertel) - and the Duke of Zweibrucken secured his succession to the throne of Bavaria.

xxxxxThis treaty was a serious check to Joseph's ambitions, but he was not a man to be easily discouraged. In 1785, aiming to extend his heartland at the expense of a distant possession strung along the North Sea, he proposed to Karl Theodore the outright exchange of Bavaria for the Austrian Netherlands. Once again, however, Frederick of Prussia intervened. In July of that year he formed the League of Princes (the Furstenbund), a union of a number of German states which included Hanover and Saxony. This association was pledged to defend the empire and the status quo in Europe. Alarmed at the opposition mounted against him, Joseph climbed down and abandoned the proposed exchange.

xxxxxIncidentally, the war of 1778-1779 became known at the time as the "Potato War" (Kartoffelkrieg). The reason for this is not very clear. It was probably because both armies were bent on cutting off each other's food supplies. On the other hand, it may have been so named because troops on both sides were short of food, and were obliged to scrounge more than usual from the local crops.