xxxxxAs we have seen, the army of John Balliol was defeated at the Battle of Dunbar in 1296 and Scotland was annexed to England. But the following year the struggle for independence was resumed by the Scottish patriot William Wallace. He defeated the English at Stirling Bridge and, having restored Scottish rule, invaded northern England. In 1298, however, Edward defeated Wallace at the Battle of Falkirk, where the Scottish spearmen were no match for the English archers and cavalry. Wallace escaped, but was eventually captured in 1305 and executed for treason. But, as we shall see, in 1306 another patriot was ready to take his place, the famous Robert Bruce. 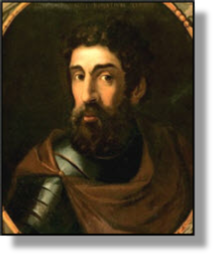 xxxxxWe have seen how, earlier in the reign, John Balliol's army was defeated at the Battle of Dunbar in 1296 and Scotland was annexed to England. King Balliol was deposed and his kingdom placed under military occupation. It seemed that Scotland’s war for independence was at an end. But this was very far from the case. The struggle was resumed as early as the following year, this time under the leadership of the Scottish patriot William Wallace (c1270-1305) (illustrated). Raising what amounted to a national army, he took on and destroyed a much larger English force at Stirling Bridge and re-established Scottish rule. He followed up this victory with an invasion of northern England, ravaging the counties of Northumberland and Cumberland. On his return he was knighted for his services and became Governor of Scotland, ruling on behalf of the imprisoned Balliol. 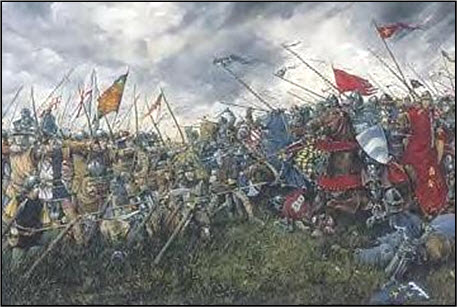 xxxxxIn 1298, a none-too-pleased Edward led yet another army into Scotland, this time a very large one, and in July he won a decisive victory at the Battle of Falkirk. The two armies met in open battle about twenty miles west of Edinburgh. Here, the Scottish spearmen proved no match for the English archers and cavalry.

xxxxxWallace managed to escape and went into hiding. Little is known about his whereabouts over the next four years. He may well have conducted a guerrilla war against the English, and there is a possibility that he went to France to try, albeit unsuccessfully, to obtain help from the French. He was outlawed by Edward in 1304 following yet another large-scale invasion of Scotland, and was eventually betrayed and captured near Glasgow. He was taken to London, found guilty of treason, and hanged, drawn and quartered.

xxxxxLittle is known of Wallace’s early life, but according to a biographical poem by a Scottish poet named Henry the Minstrel, he was a rebel in his youth and constantly led attacks against the English. In 1297, following the defeat of his king, John Balliol, he became leader of the Scottish resistance movement and captured a number of English fortresses before inflicting a severe defeat upon the English at Stirling Bridge as they attempted to cross the River Forth. The following year, however, came the Battle of Falkirk, a serious defeat from which Wallace never recovered.

xxxxxHowever, the Scots did not give up so easily. As we shall see, in 1306 another Scottish nationalist, none other than Robert Bruce, emerged as the new leader.

xxxxxIncidentally, The Scottish poet Henry the Minstrel, sometimes known as Blind Harry because he was born blind, collected a large number of legends concerning William Wallace and put them into a work entitled The Acts and Deeds of the Illustrious and Valiant Champion Sir William Wallace. This manuscript, dated 1488, depicts Wallace as some kind of superman and is hardly reliable as an historical source, but it certainly reflects the patriotic fervour which surrounded - and continues to surround - the eventful career of Sir William Wallace.