xxxxxThe massacre which occurred on Saint Bartholomew's Day in 1572, though particularly brutal, was but one of the many acts of savagery which took place during the French Wars of Religion. Following a spate of atrocities which broke out in the 1560s, the Catholics planned the mass murder of Huguenots in Paris. Shortly before dawn, the bell of Saint-Germain-l'Auxerrois began to toll, and this was the signal for the massacre to begin. The slaughter in Paris continued for about a month, and went on much longer in the provinces. About 20,000 Huguenots were killed during the blood bath, and the pope, Gregory XIII, had a medal struck to celebrate the event! But this atrocity only served to strengthen the resolve of the Protestants, though large numbers did take refuge in England and Germany. The protestant leader Henry of Navarre saved his life by becoming a Roman Catholic. As we shall see, he was to be the man who, declared king of France as Henry IV in 1589, was to bring about an end to the religious wars by the Edict of Nantes in 1598.

xxxxxAs we have seen, the French Wars of Religion, a vicious, brutal series of conflicts between Protestants and Catholics, broke out in the early 1560s, ripping the country apart for close on forty years. Eight wars were fought in this time, the components of a bitter, see-saw struggle that did not come to an end until 1598. Only then, by the Edict of Nantes, did the Huguenots gain a sizeable degree of religious freedom, and the country return to some semblance of peace. 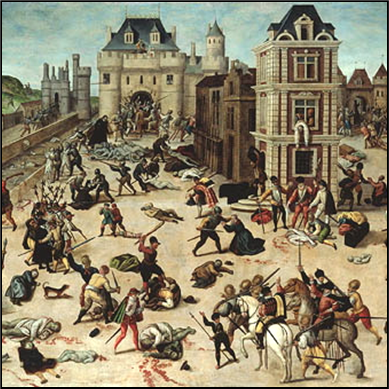 xxxxxThe hatred and fear built up between the French Calvinists and the Catholics boiled over in 1562 when soldiers of the Duke of Guise, the Catholic leader, murdered more than 60 Huguenots while they were holding a church service in a barn at Vassy. The conflict which then began was one in which few holds were barred. Numerous acts of barbarity were committed on both sides. After the killings at Vassy, for example, the Huguenots retaliated by murdering Catholic priests and raping nuns.

xxxxxThe worst atrocity, however, was undoubtedly the one which came to be known as the St. Bartholomew's Day Massacre, committed on the 24th August 1572. This was carried out by a Catholic faction led by Henry, Duke of Guise and Catherine de Medici, former wife of Henry II of France and mother of the young, mentally-retarded king Charles IX. Having failed in a recent attempt to assassinate the Huguenot leader, Admiral Gaspard de Coligny, the new aim was to murder all the leading Huguenots who were in Paris after attending the marriage of Catherine's daughter to Henry of Navarre, himself a Protestant. The plan succeeded and was not, in fact, confined to Paris. Shortly before dawn the bell of Saint-Germain-l'Auxerrois began to toll and this was the signal for the massacre to begin.

xxxxxThe slaughter in Paris continued for about a month; in the provinces it did not end until the beginning of October. It is estimated that about 20,000 Huguenots, possibly more, were killed in Paris and throughout France during this blood bath. Houses and shops belonging to Calvinists were pillaged or burnt down, and women and children were not spared. In Paris, the bodies of many of the victims were thrown into the River Seine. Amongst those slaughtered was the Huguenot leader Admiral Gaspard de Coligny, brutally killed under the personal supervision of Henry, Duke of Guise. Henry of Navarre escaped the massacre, however, and his life was spared after he renounced his protestant faith and became a Catholic.

xxxxxFollowing the massacre, Catherine received congratulations from all the Catholic states, whilst the pope, Gregory XIII, celebrated with a hymn of praise to God, and had a medal struck to celebrate the event. He also commissioned the painting of a mural (part illustrated right) and this can be seen in the Vatican to this day. The marriage of Catherine's daughter to Henry of Navarre, which had taken place just a few days before the killings, came to be known as the "scarlet nuptials".

xxxxxThe events of the 24th August 1572 only served to strengthen the resolve of the Protestants, though large numbers did leave France to take refuge in England and Germany. Henry of Navarre (illustrated), h 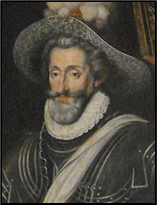 aving escaped from prison in 1576, returned to lead the Huguenots. He made little or no progress over the next decade, but in 1587, during what came to be known as the War of the Three Henrys, he roundly defeated the Catholics at the Battle of Coutras and his fortunes changed. Over the next two years both Henry, Duke of Guise, and the king, Henry III, were assassinated, and in 1589 he found himself king of France as Henry IV! Four years later, in order to put an end to the bloodshed, he again converted to the Catholic faith and, having seized Paris, was in control of the country by 1598. As we shall see, it was in that year that he issued the Edict of Nantes by which the Huguenots gained a substantial measure of religious and political freedom, and the country enjoyed a long-awaited period of comparative peace.