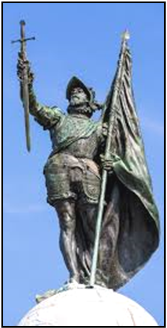 Nunez de Balboa first visited the north coast of South America in 1500 as a member of an expedition led by his countryman Rodrigo de Bastidas. For a time he tried his hand at farming in present-day Haiti, but, running into debt, he joined another expedition and founded a settlement at Darien (now Panama) in about 1511. It was from here that Balboa, being told that gold was to b 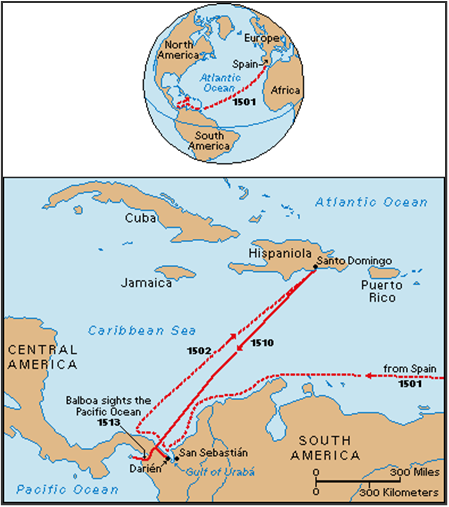 e found in the west, and in no way prepared to wait for any reinforcements from Spain, led a small party of Spaniards across the Panama Isthmus in 1513. Standing on a peak in Darien in September of that year, he sighted the Pacific Ocean and, soon afterwards, became the first European to reach its eastern shore. He claimed the ocean - which he named the South Sea - for Spain, together with all the adjoining land, and was duly appointed governor of the provinces of Panama and Coiba. But his triumph was short-lived. Soon afterwards, the Spanish soldier Pedrarias Davila arrived at the head of a large force and took over as governor of Darien. A great deal of enmity developed between the two men, and in 1519 Balboa was beheaded at Acla on what appears to be trumped-up charges of treason.

xxxxxBalboa was a tough, ruthless leader, and he gained a reputation for his cruelty towards the native Indians, but the small colony he established at Darien proved the first stable settlement on the continent, and his crossing of the Panama Isthmus - by no means an easy task - opened the way for Spanish expansion along the western coast of South America.

xxxxxThe Spanish explorer Vasco Nunez de Balboa founded a settlement at Darien, near Panama, in 1511. It was from here that he led a small party across the Panama Isthmus and, in 1513, became the first European to reach the east coast of the Pacific Ocean. He claimed the “South Sea” and the adjoining land for Spain, and became governor of the provinces of Panama and Coiba. Soon afterwards, however, the Spanish soldier Pedrarias Davila arrived on the scene, and, taking over as governor, had him beheaded on what appears to be trumped-up charges of treason. Balboa was a cruel, ruthless leader, but his exploits opened the way for Spanish expansion along the whole of the western coast of South America.

xxxxxIt was also in 1513 that Balboa’s fellow 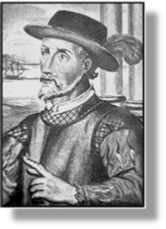 countryman Juan Ponce de Leon (1460-1521) became the first European to reach Florida. Born of a noble family, he first served his country as a soldier, but in 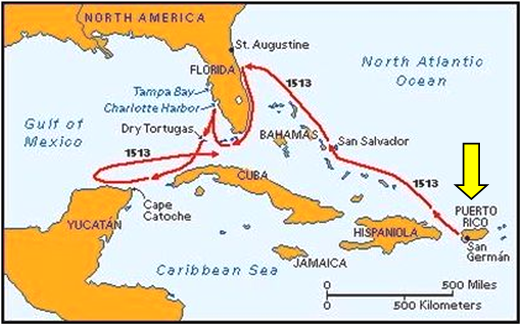 1493 he is believed to have accompanied Christopher Columbus on his second voyage. He settled in Hispaniola and soon became the governor of the eastern part of the island, but he was anxious to explore on his own behalf. In 1508, in search of gold, he led an expedition to the Island known today as Puerto Rica where he founded the town of Caparra on the north coast (now San Juan) and began projects in agriculture and gold mining. The harbour sheltering the town came to be known as Puerto Rica and this name was later applied to the whole island.

xxxxxThen in 1513, lured by native stories of a so-called “fountain of youth” (you remained young if you drank from it), he set out from Puerto Rica (arrowed on map), and in April of that year landed on the coast of Florida near the present-day centre of St. Augustine. Because it was Easter time and the vegetation of the area was lush, he named what he thought to be an island after the Spanish term for Easter, Pasca Florida, meaning the season of flowers. He then sailed through the Florida Keys and reached Charlotte Harbour on the peninsula’s west coast before returning to Spain. Here he was made military governor of the “island” of Florida and given permission to colonise the areas he had discovered. He returned to Florida in 1521, but on landing at Charlotte Harbour his party was attacked by Indians and he was mortally wounded. He died in Havana later that year. Clearly, he never discovered the fountain of youth, but he has not been forgotten. In Puerto Rica the city of Ponce is named in his honour.

xxxxxIncidentally, Ponce de Leon was the first to describe the Gulf Stream, that complex network of warm currents which flow from the Straits of Florida and move into the North Atlantic, moderating the climate of Western Europe.

xxxxxThis was a great age of exploration. It was around this time that the Portuguese acquired Goa in India, conquered Malacca and reached as far as Canton and Macao in China. For their part the Spanish occupied Cuba in 1511, establishing the capital of Santiago, and four years later, searching for a south-west passage to the Pacific, reached the mouth of the Rio de la Plata in Argentina and claimed the land for Spain. However, as we shall see, it was to be Magellan who in 1522 rounded Cape Horn and, by discovering the western route to the Far East, found a new way around the world.

xxxxxAnd, as one would expect, this was also a great age for map-making. There was a constant need to update! A popular work of the time was Cosmographia by the German cartographer and astronomer Petrus Apianus (1495-1552). Published in 1524 it was translated into all the major European languages and went to fifteen editions. The success of this textbook, which included the idea that lunar distances might be used to determine longitude, played a large part in his being appointed professor of mathematics at the University of Ingolstadt. 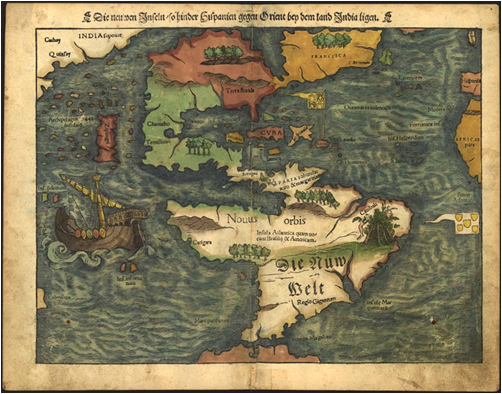 Cosmographia, and one which also remained popular and long in use, was the work of another German, Sebastian Münster (1488-1552), professor of Hebrew at Basel University. First published in 1544, it contained not only maps, but also a vast amount of information about the known world. No less than 40 editions were printed and it was translated into five languages. The work was well illustrated by means of woodcuts, and later editions contained portraits, city views and examples of national costumes. He was the first cartographer to make separate maps of the continents and, as the illustration here shows, he was the first to show North and South America connected by land.

xxxxxHowever, as we shall see (1569 L1), as far as navigation was concerned, it was to be Gerardus Mercator of Flanders who was to emerge as the leading mapmaker during this challenging age of discovery.

xxxxxIt was also in 1513 that Balboa’s fellow countryman Juan Ponce de Leon (1460-1521) became the first European to reach Florida. He began his career as a soldier, but it would seem that in 1493 he accompanied Christopher Columbus on his second voyage. He settled in Hispaniola, but in 1508 set out in search of gold. He reached the island of Puerto Rica, but five years later, going in search of the so-called “fountain of youth”, landed on the lush coast of Florida, naming it Pasca Florida (season of flowers). He then journeyed to the west coast, reaching Charlotte Harbour, and it was here, during a return visit, that he was killed by natives in 1521. Meanwhile, the Spanish occupied Cuba in 1511 and reached Argentina four years later. Then in 1522 Magellan rounded Cape Horn and found a new route to the rich lands of the Far East.

Balboa: statue overlooking Panama Bay. The work of Miguel Blau and Mariano Benlliure, it was presented to the Republic of Panama by King Alfonso XIII, and inaugurated in 1924. Map (Caribbean): licensed under Creative Commons – fsas.wikispaces.com. Map (Florida): by courtesy of www.robinsonlibrary.com. Ponce de Leon: 16th century engraving, artist unknown, from The Narrative and Critical History of America, edited by the American historian Justin Winsor (1831-1897), 1886 – private collection. Map (Americas): produced by the German cartographer Sebastian Münster and published in his Basel edition of 1540 – Library of Congress, Washington, USA.