xxxxxAs we have seen, Turkey, fearing Russian designs on the Black Sea, declared war on Russia in 1853. Britain and France followed suit in March 1854 and landed an army on the Crimean peninsula in the September. They intended to attack and capture the naval base of Sevastopol, but their way was barred by a Russian force north of the city. In the Battle of Alma River which followed, the allies eventually defeated the Russians, but they did not push on at once to take the naval base. When they reached there it was well defended, and they were forced to lay siege to the city for nearly a year. In the meantime, the Russians, anxious to raise the siege, attacked the British lines at the Battle of Balaclava. They were repelled by the Heavy Brigade in the South Valley and forced to retreat, but then, due to a command error, the Light Brigade was ordered to attack the Russian guns at the head of the North Valley. In the infamous “Charge of the Light Brigade” that followed, the British cavalry lost 272 men, killed or wounded. The situation was saved by a French cavalry charge, and the intervention of British infantry. In November at the Battle of Inkerman, the Russians again attacked the British in order to relieve Sevastopol. They took the British lines, but were later forced to retreat. By now, however, the Russian winter had set in and, as we shall see, the allies were to suffer even greater hardship in 1855. This was the year in which Sevastopol was finally taken and nurse Florence Nightingale became famous for her work in caring for the sick and wounded.

THE BATTLES OF ALMA RIVER, BALACLAVA AND INKERMAN 1854  (Va) 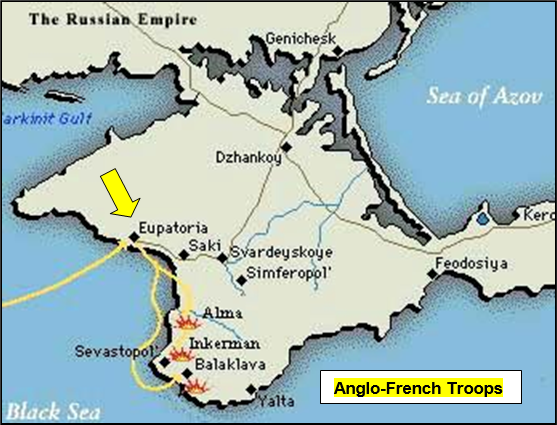 xxxxxAs we have seen, it was in October 1853 that war broke out between Turkey and Russia, caused in the main by the ambitions of Tsar Nicholas in the Balkans and Black Sea areas. The Turks were confident that both Britain and France would come to their support and this they did in March 1854. Both countries had already sent naval forces to the Black Sea, but the war was primarily a military one. The British army, under the command of Lord Raglan, numbered around 28,000, the French force, led by Marshal Saint Arnaud, was slightly larger. The Austrian government remained neutral but, despite the help it had received from Russia in quelling a revolt in Hungary in 1849, it strongly opposed the Russian advance into the Balkans and was prepared, therefore, to use its neutrality to good effect. This it did. Its threat to enter the war on the side of the Turks forced the Russians to evacuate both Moldavia and Walachia - occupied the previous year - and to allow Austrian troops to take their place in the August of 1854.

xxxxxThe Russian evacuation of the Danubian Principalities meant that the allies were obliged to rethink their theatre of operation. Eventually they decided to land on the Crimean peninsula and capture Sevastopol, headquarters of Russia’s Black Sea fleet on the south-west coast. An allied force of some 60,000 men landed at Eupatoria in late September (arrowed on the map above), but in making their way southwards came against a Russian army of some 40,000, commanded by General Alexander Menshikov, and holding high ground close to the River Alma, just north of Sevastopol. In the Battle of Alma River that followed an Anglo-French force made a frontal attack on the Russian lines, whilst the Turks and the remainder of the French executed a wide flanking movement and took the enemy by surprise. As a result the Russians pulled back their artillery and, coming under further attacks, were forced to fall back on Sevastopol. Total losses amounted to 9,000, two-thirds of which were suffered by the Russians. 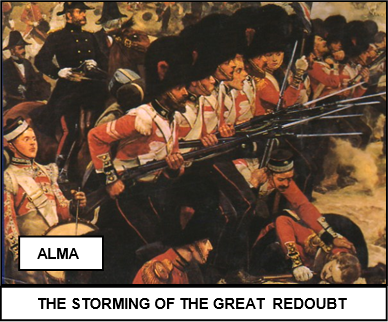 xxxxxThe allied victory at Alma River opened the way to the naval base at Sevastopol, but this battle had already shown some of the signs of weakness in logistics and command which was to hamper the allied campaign throughout the war. Because of the lack of transport, much equipment, including tents and clothing, had to be left at Eupatoria, the port of embarkation, whilst in the battle itself, confused orders almost ended in disaster for the British during their frontal attack. Furthermore, because of disagreements between the impetuous Lord Raglan and the more cautious Saint Arnaud, the allied forces failed to pursue the Russians from the battlefield and capture Sevastopol with comparative ease. As a result, by the time the allies reached the city, its defences had been strengthened and they were obliged to lay a siege. This lasted close on a year, during which time the besieging forces were subject to a number of costly attacks.

xxxxxIncidentally, the Scottish surgeon James Thomson (1823-1854) lost his life at the Battle of Alma while treating Russian wounded. He saved many lives while serving in the Crimean War regardless of their nationality. A commemorative plaque in his hometown of Cromarty describes him as a “good Samaritan”, and a granite obelisk over 50ft high stands to his memory on the site of Forres Castle, across the Moray Firth.

xxxxxThe second major confrontation of the war came the following month, October, when the Russians, attempting to relieve Sevastopol, launched an attack upon the rear of the British positions at the port of Balaclava, six miles south-east of the naval base. The conflict which followed - the famous Battle of Balaclava - was fought in two valleys divided by a range of low hills. Having broken through the Turkish lines on the 25th, the Russians entered the South Valley, but were immediately confronted by the British cavalry’s Heavy Brigade and driven back over the surrounding hills. As they retreated they began to take with them guns which had been 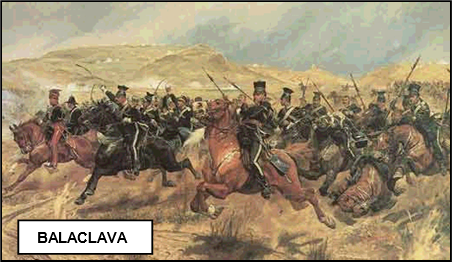 abandoned by the Turks in their earlier engagement.

xxxxxToxput a stop to this, the British Commander, Lord Raglan (1788-1855) sent a scribbled note to Lord Lucan (1800-1888) commander of the cavalry, ordering that the cavalry should “advance rapidly to the front, follow the enemy and try to prevent the enemy carrying away the guns”. Totally misunderstanding what was, in itself, a vague despatch, Lucan ordered the Earl of Cardigan (1797-1868), commander of the Light Brigade, to attack the Russian guns entrenched a mile or so at the head of the North Valley. Realising the suicidal nature of such a command, but having no choice but to obey, Cardigan promptly led his brigade in an attack which has gone down in history as the infamous “Charge of the Light Brigade” (illustrated). As a French commander later commented, C’est magnifique, mais ce n’est pas la guerre. Casualties were understandably heavy. Not only were the British cavalry a target for the guns they were attacking, but Russian artillery was also in place on either side of the long “Valley of Death”. Of the 673 men who took part in the charge, 244 were either killed or wounded, 45 were taken prisoner, and 500 horses never returned. Greater loss was prevented by a timely charge of French cavalry, and the break up of a Russian cavalry attack by the famous “thin red line” of the 93rd Highland Regiment. But at the end of the day the Russians were left in charge of the battlefield, and the British had lost thereby their major supply route from Balaclava to the heights above Sevastopol.

xxxxxIncidentally, the Battle of Balaclava inspired the Charge of the Light Brigade, the famous poem composed by the English poet Lord Tennyson and published in 1854. Two verses are quoted below:

Was there a man dismayed?

Not though the soldier knew

Theirs not to make reply,

Theirs but to do and die:

Into the valley of Death

Cannon to right of them,

Cannon to left of them

Stormed at with shot and shell

They that had fought so well;

Came through the jaws of Hell,

All that was left of them, 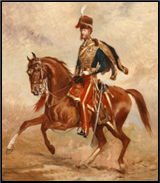 xxxxx…… The Earl of Cardigan, the man who led the charge, was one of the lucky survivors. On his return he was feted as a hero, but he was later obliged to refute allegations that he had fled from the field. Ironically, he died in 1868 after falling from Ronald, the handsome chestnut that had taken him through Tennyson’s “Valley of Death”. A knitted jacket that the Earl reputedly wore during the Crimean campaign came to be known as a “cardigan”. 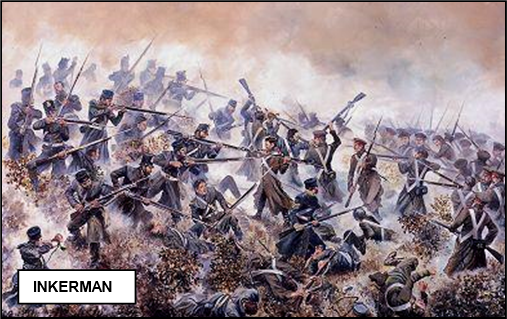 xxxxxThere followed, in November, the Battle of Inkerman, a seven-hour encounter which came to be known as “the soldiers’ battle” because of the extent and ferocity of the hand-to-hand fighting. Yet another Russian attempt to relieve the siege of Sevastopol, it proved unsuccessful, but both sides suffered heavy loses. The major event of the battle was the Russian attack upon the Inkerman Ridge on November 5th. Under cover of fog the Russians managed to reach the British lines and seize the height, but their artillery was hampered by the thick mist, and they lost their position following a British counterattack. And a later assault upon the “Sandbag Battery” was also repulsed, this time by a combined French and British force.

xxxxxThe Battle of Inkerman marked the onset of the dreadful Crimean winter. In 1855, as we shall see, this brought even greater hardship, death and disease to the poorly fed and badly clothed army which continued to lay siege to Sevastopol until the September. And it was on the very day that the Battle of Inkerman was fought that the English nurse Florence Nightingale arrived to take charge of the nursing in the barrack hospital at Scutari, near Constantinople, an event which was to introduce new standards in the care of the sick and wounded. 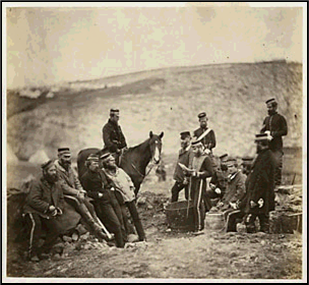 xxxxxIncidentally, the print on the right is by the English photographer Roger Fenton (1819-1869), a founder member of the (Royal) London Photographic Society in 1853. As the British government’s official photographer, he and his assistant Marcus Sparling arrived in the Crimea in the winter of 1855. The 360 prints they produced in the back of a horse-drawn van made up the first photographic documentary of a war. However, they portrayed the conflict in a favourable light, and showed nothing of the hardships and suffering endured by the fighting men. Indeed, Fenton was specifically sent to the Crimea in order to counter the severe criticism of the campaign contained in the dispatches of William Howard Russell, the war correspondent for The Times. The charge of the Light Brigade, for example, only dwelt on the heroic aspect. On his return some of his photographs were printed in the Illustrated London News. This print shows officers and men of the British 8th Hussars. ……

xxxxx…… The Illustrated London News also published engravings of drawings of the Crimean War produced by the French artist-correspondent Constantin Guys (1802-1892). A prolific draftsman, his drawings in pencil and ink, often with watercolour washes, also provided a witty pictorial record of fashionable life in Paris during the reign of Napoleon III. Earlier in his career he accompanied the English poet Lord Byron to Missolonghi at the start of the Greek war of independence. In 1863 the French poet Charles Baudelaire published an article about Guys’s life and artistic talent entitled The Painter of Modern Life.