xxxxxAs we have seen (1402 H4), on the death of the highly successful Turkoman Mongol leader Tamerlane in 1405, his vast lands were divided up. Out of the inevitable struggle for power emerged his great grandson Babur (1483-1530). By the early 1520s he had established a kingdom in Afghanistan centred on Kabul and then, after four failed attempts, he invaded the Punjab and in 1526 defeated the Sultan of Delhi at the Battle of Panipat. Though heavily outnumbered, his disciplined army and his own military skill won the day. He then captured Delhi and Agra and became the first in a long line of Indian Mughals. His son was forced into exile for some years, but, as we shall see, in 1556 (M1) his grandson Akbar the Great established the dynasty on a firm footing.

by the year of his death in 1405, the Turkoman Mongol leader Tamerlane had conquered vast areas of the Middle East and southern Asia. His final achievement was a decisive victory over the Ottoman leader Bayazid at the Battle of Ankara in 1402 (H4). This slowed down the Turkish advance and thus gave a few years of extra life to the ailing Byzantine Empire. Having received submission from both the Sultan of Egypt and the Byzantine Emperor, Tamerlane returned to Samarkand and died while on his way to conquer China!

xxxxxOn his death, his lands were divided among his sons and grandsons and this led to the inevitable internal feuds. His dynasty, the Timurids, managed to rule Transoxania and parts of Iran as late as the early sixteenth century where they became noted for their patronage of Persian art and Turkish literature. Samarkand developed into a well-known centre of scholarship and it was here that his grandson, Ulugh Beg, established his observatory. 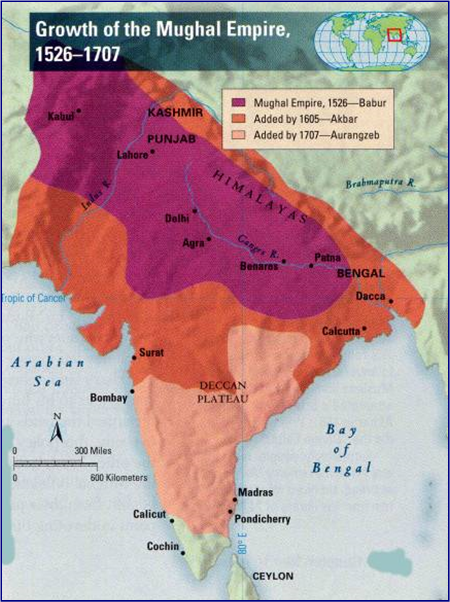 xxxxxBut of all Tamerlane's descendants, it was his great-grandson Babur (Arabic for "tiger") (1483-1530) who followed closely in his footsteps. In 1495, at the age of eleven, he succeeded his father as ruler of the small principality of Fergana (in today's Uzbekistan). Two years later he captured Samarkand, - though only for a short while - and then went on to establish a kingdom in Afghanistan centred around Kabul. In 1525, after four unsuccessful attempts, he invaded the Punjab via the Khyber Pass and the following year, 1526, defeated Ibrahim Lodi, the Sultan of Delhi, at the Battle of Panipat, fifty miles north of Delhi. Ibrahim fielded a much larger army, but it proved no match for the highly-trained force equipped with artillery and led by Babur, a soldier of distinction. Following this victory, he captured Delhi a few days later and, setting up his court at Agra, became the first of a line of Indian emperors known as the Great Mughals, a line that was to last until 1858 (though by then it was a dynasty in name only). Inxhis last four years, by victories at the Battles of Khanua in 1527 and Gogra River in 1529, he conquered northern India as far as Bengal.

The dynasty got off to a shaky start, with his son, Humayun, forced into exile for some fourteen years. As we shall see (1556 M1), it was left to Babur's grandson, Akbar the Great, the third Mughal emperor, to establish the dynasty firmly on the subcontinent of India. It was not until the reign of the English king, Charles II (1660-1685), that it began to lose its power.

xxxxxIncidentally, apart from being an able soldier, Babur was, for the age he lived in, a man of rare compassion. Cultured, witty, and a lover of natural beauty, he also gained a reputation for his poetry and autobiographical notes, translated into English in 1922 with the title The Memoirs of Babur.