xxxxxDuring the reign of Elizabeth there were a number of Catholic conspiracies against her. Roman Catholics could not only call upon the support of Spain and France, but could also pin their hopes on the Roman Catholic Mary Queen of Scots, held a prisoner in England since 1568. They regarded her as the rightful queen. After a northern rebellion by Catholic nobles had been crushed in 1570, a Florentine merchant named Ridolfi, working in London, planned an invasion of England. In 1571 he gained the support of Pope Pius V, Philip II of Spain, and the Duke of Alva, governor general of the Spanish Netherlands, but the Ridolfi Plot was uncovered by the seaman John Hawkins. A major conspirator, the catholic Duke of Norfolk, was executed for treason, but Ridolfi managed to escape to Italy.

xxxxxThe Babington Plot of 1586 was but one of many Catholic conspiracies which attempted to overthrow Protestant Queen Elizabeth. The religious settlement she imposed was bitterly opposed by Protestant dissidents who felt that it did not go far enough along the road to reform, but it was equally threatened, and more dangerously so, by English Roman Catholics. They could not only call upon outside support from Spain and France should the opportunity arise, but they were also able to pin their hopes on the presence in England of the Roman Catholic Mary Queen of Scots. A cousin of the Queen and a grandniece of Henry VIII, she had fled from Scotland in 1568 and was being held a prisoner in all but name. In the eyes of the Catholics, she was the rightful queen of England. 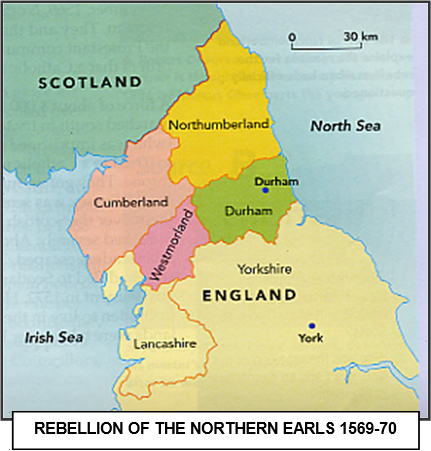 xxxxxThus long before the Babington Plot of 1586 there was evidence of growing Catholic unrest. In 1569 a serious rebellion broke out in the North, led by staunchly Catholic nobles (see map). It was put down with brutal force. Then two years later the Ridolfi Plot was uncovered. Thisxwas a scheme hatched up by Roberto Ridolfi (1531-1612), a Florentine merchant banker who was working in London and enjoyed the confidence of the government. He had been secretly involved in the northern rebellion and now, along with John Leslie (1527-1596), the Catholic bishop of Ross, he planned a Spanish invasion, and the replacement of Elizabeth by Mary, following her marriage to the catholic Duke of Norfolk. In March 1571 he went to the continent to obtain the support of Pope Pius V, Philip II of Spain (who had been married to Mary I of England), and the Duke of Alva, the ruthless governor general of the Spanish Netherlands.

xxxxxThe plot seemed all set to run, but it all went horribly wrong. A little earlier the English seaman John Hawkins, having feigned sympathy with the Catholic cause, had gained the confidence of the Spanish ambassador in England and obtained details of the conspiracy. WhenxRidolfi's servant, one Charles Baillie (1542-1625), returned to Dover, he was at once arrested. Letters that he was carrying, plus his confession and that of John Leslie, was more than sufficient to topple the plan. Leslie was given two years imprisonment, and the Duke of Norfolk was executed for treason in June 1572. Ridolfi, still on the safe side of the Channel, returned to Italy and later became a Florentine senator.

xxxxxBoth the Northern Rebellion and the Ridolfi Plot were almost certainly linked to Mary Queen of Scots, an ambitious woman who was no stranger to conspiracy. For Elizabeth, this posed a serious political problem, but she continued to resist the pleas of Parliament, and many of her counsellors - not to mention those of her Protestant subjects - for Mary's execution. Such a move, she judged, would be to invite trouble, not to solve it. With the passing of the years, however, the pressure for such an action increased alongside catholic opposition. Jesuits were being infiltrated into the country to strengthen Catholic resolve - like Edmund Campion, caught and hanged in 1581 -, the Pope had called for a crusade against England, and by the mid-1580s Philip was assembling a large fleet of warships. In the meantime another plot had been hatched. 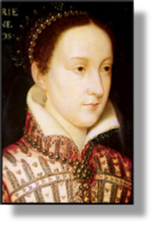 xxxxxIt was against this background that the Babington Plot was hatched in 1586. Anthony Babington of Derbyshire (1561-1586) was brought up secretly as a Roman Catholic, and in his youth became devoted to the cause of Mary Queen of Scots (illustrated) when he served as a page to the Earl of Shrewsbury, her "keeper" at this time. In 1580 he went to London and, while attending the court of Elizabeth, joined the secret society in support of the Jesuit missionaries, then increasing in number by leaps and bounds. Following the execution of the English Jesuit, Edmund Campion, in 1581, he travelled to the continent and received a promise from Philip II of Spain that he would invade England with a large force once the queen had been assassinated. Hexreturned with letters for Mary Queen of Scots and in May 1586 was joined in the conspiracy by a priest called John Ballard. 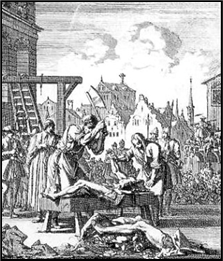 xxxxxBabington then made a fatal mistake. He wrote to Mary telling her of his plans, but his letter and her reply were intercepted by Walsingham's spies. Ballard was seized and, doubtless under torture, betrayed his fellow conspirators. Babington tried to flee the country, but all the ports had been closed. He took refuge in a Roman Catholic convent in Harrow, just outside London, but in August he was discovered. He tried to put all the blame on Ballard, and begged the Queen for mercy, but to no avail. He was tried alongside Ballard and three others involved in the plot and all were found guilty of high treason. Babington was brutally executed in Lincoln's Inn Fields in September 1586 (illustrated).

xxxxxIt seems highly likely that the Babington Plot was, in fact, a carefully engineered trap, craftily set up by the government (i.e. Walsingham) in order to gain sufficient evidence to have Mary tried and executed for high treason. Whether this was so or not, the affair certainly ended up with that result. After much hesitation, Elizabeth signed Mary's death warrant, and she was beheaded in February 1587. Some have since argued that the evidence against Mary was not conclusive, dependent upon the interpretation of a postscript in her letter to Babington, but, given her track record, there can be little real doubt concerning her complicity.

xxxxxIncidentally, it is known that Walsingham used the services of an English calligrapher named Peter Bales (1547-c1610). He was very skilful at imitating handwriting, and we are told that he assisted in uncovering the Babington plot! Apart from his help in such matters, he produced one of the earliest attempts at shorthand, published in his book Arte of Brachygraphie of 1590, and it is said that he was so proficient at microscopic writing that he produced a Bible which was no bigger than a large walnut. To draw attention to his rare talent, he wrote a number of texts on a ring and presented it to the Queen.

xxxxxA similar attempt to bring about an invasion of England was made by the staunch Catholic Francis Throgmorton (1554-1584). By 1583 he had organised a French invasion to restore papal authority, but the Throgmorton Plot was likewise discovered and he was executed for treason in May 1584. 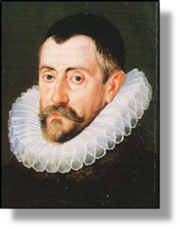 xxxxxIt was about this time that yet another conspiracy, the Throgmorton Plot, was discovered. A staunch Catholic, Francis Throgmorton (1554-1584), travelled to the continent in 1580 and conspired with English Catholics in exile to bring about Elizabeth's downfall. He returned as an agent in 1583, having planned an invasion by the French to restore papal authority, but due to the vigilance of the Queen's principal secretary Sir Francis Walsingham (illustrated) - or that of his spies - the plot was uncovered. Throgmorton was tortured on the rack, and made a full confession. He was tried and found guilty of treason in May 1584, and executed in the July.

xxxxxIt was against this background that the Babington Plot was hatched in 1586. Anthony Babington (1561-1586), a secret Catholic, had become devoted to the cause of Mary Queen of Scots. In 1581 he received a promise from Philip II of Spain that he would invade England once the queen had been assassinated. Foolishly, Babington wrote to Mary telling her of his plans. The letter and her reply were intercepted by government spies, and the game was up. One of the conspirators, a priest called John Ballard, betrayed his fellow conspirators, and all were executed in 1586. It has been suggested that the plot was craftily set up by the government in order to implicate Mary Queen of Scots. Whether this was the case or not, she was in fact accused of complicity in the plot and beheaded in February 1587.