xxxxxBy the early part of the 19th century the Ashanti Empire, founded in 1689 (W3), had become one of the most powerful states in West Africa. However, the arrival of the British along the coast brought about four Anglo-Ashanti Wars. In the First and the Second, the British made no progress against a resourceful enemy, but in the Third, ending in 1874, the Ashanti were forced on the defensive. Then twenty years later the British, fearing that other European powers - notably France and Germany - might attempt to infiltrate the area, decided to take over the Ashanti Empire. They occupied the capital Kumasi in 1896 and forced their king to accept British protection. However, in 1900 a rebellion broke out, led by the Queen Mother Yaa Asantewaa - the so-called War of the Golden Stool - and it was not until January 1902 that the territory was officially absorbed into the Gold Coast colony. In 1957 the Gold Coast became the first colony in the British Commonwealth to gain its independence, and it was then renamed Ghana, after the ancient West African empire of that name. 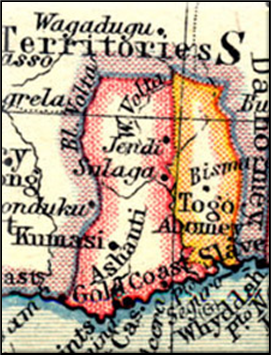 xxxxxThe Ashanti Empire, founded by Osei Tutu in 1689 (W3), had become one of the most powerful states in West Africa by the early part of the 19th century, stretching from the Togo Mountains in the east to the Komoe River in the west. However, with the arrival of the British and the establishment of colonial territories in Sierra Leone, the Gambia and the Gold Coast in 1821 (G4), its might was challenged and conflict became inevitable. The British, regarding the Ashanti as a threat to their coastal settlements and the trade they brought, decided to bring them to heel, but the Ashanti were no mean fighters, and it was to take four wars and over 70 years before they were subdued.

xxxxxThe First Anglo-Ashanti War, as we have seen, broke out in 1824 and proved something of a disaster for the British. An invasion force from the Cape Coast, aiming to open up the interior and put an end to the slave trade, was defeated and its commander killed. The Second Anglo-Ashanti War of 1863 was little more than a border skirmish, but the Third Anglo-Ashanti War, by comparison, was a violent affair, and proved a turning point. It began in 1873 (Vb) over the possession of Elmina, an important coastal centre for the slave trade. Having been taken by the British, the Ashanti invaded the area in large numbers. This time the British were better prepared. An expeditionary force made of some 2,500 British troops and a large native contingent, quickly took to the field, under the command of Major General Sir Garnet Wolseley, a veteran of the Crimean War. It defeated the Ashanti at the Battles of Amoaful and Ordahsu, overthrew the emperor, and burnt down the capital Kumasi. By the Treaty of Fomena in March 1874, the Ashanti renounced their claim to Elmina, accepted free trade, and were obliged to pay a large indemnity to Britain. 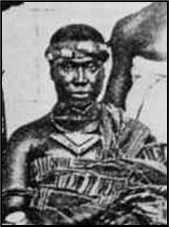 xxxxxThe final confrontation between the two “Empires” - the Fourth Anglo-Ashanti War - came twenty years later. By then both France and Germany were showing interest in the area on account of the growing trade in gold, and the British feared that the Ashanti might be used as a means of penetrating the region. When, in 1891, the Ashanti refused an offer to become a British protectorate, it was seen as necessary to annex their territory in order to make secure the hinterland. On the pretext that fines imposed by the Treaty of Fomena had not been paid, the British went to war. A well-equipped expeditionary force of British and West Indian troops left Cape Coast and arrived in Kumasi in January 1896. It met with no serious opposition. The Ashanti king, Nana Ageyman Prempeh I (illustrated), realising the strength of the invading force, had ordered his people not to resist. A native levy of local tribes, under the command of Major Robert Baden-Powell, arrived shortly afterwards, as did Sir William Maxwell, the governor of Cape Coast. Prempeh was arrested, deposed, and forced to sign a treaty of protection. Then, along with other prominent Ashanti leaders, he was sent into exile in the Seychelles.

xxxxxIn 1900, however, what the British had seen as a successful invasion and conquest of the Ashanti Empire turned into a bloody conflict. In March of that year the colonial governor Sir Frederick Hodgson, in order to confirm British rule over the region, demanded that the Ashanti hand over their legendary Golden Stool (illustrated), the symbol of their nation’s spirit and unity, as we have seen, since the 17th century. Thexremaining Ashanti leaders, led by the Queen Mother Yaa Asantewaa, refused, to surrender this sacred relic. A party of Hausa, sent out to find and capture the Golden Stool, was attacked and destroyed, and three tribes, the Ashanti, Kumasi and Kokofu, - with a combined force of some 40,000 warriors - then took up arms. 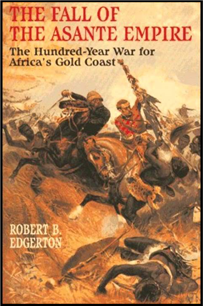 xxxxxFromxMarch through to September, the Ashanti and their allies fought against the British in what came to be known as the War of the Golden Stool. Telegraph lines to Kumasi were cut, routes to the city were blocked, and an offensive was launched against the small garrison there. All European residents, including Hodgson, together with about 100 native solders, were forced to take refuge in Kumasi Fort. There they came under prolonged attack, but during April and May reinforcements did manage to reach the fort, increasing the garrison to some 700, including 29 Europeans and four women. Then in June, with supplies running low and disease rife, the governor ordered a breakout, and 600 men of the garrison eventually reached Cape Coast on the 10th July. A large number were wounded, and two Europeans and 39 Hausa were killed during the escape. Eventuallyxa relief force of some 1000 local troops managed to reach Kumasi. It relieved the fort and then went on the offensive, defeating the “rebel” forces at Obassa - the last great battle of the Anglo-Ashanti Wars - on the last day of September. The spears of the Ashanti proved no match for the bayonet and machine gun of the British force. Many chiefs then surrendered, and resistance was finally overcome by the end of the year. 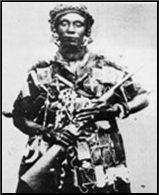 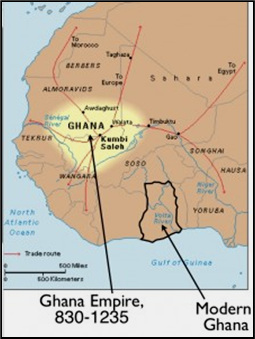 xxxxxYaa Asantewaa (illustrated) and other Ashanti leaders were then sent to join Prempeh I on the Seychelles, and in January 1902 the Ashanti territories were officially absorbed into the Gold Coast colony, bringing to an end more than 200 years of independence, doggedly achieved by a proud and resourceful people. In 1957 the Gold Coast became the first colony to gain independence within the British Commonwealth, and became known as Ghana, named after the medieval Ghana Empire of West Africa (illustrated).

xxxxxIncidentally, Colonel Prince Henry of Battenberg, the husband of Princess Beatrice - the fifth daughter and youngest child of Queen Victoria and Prince Albert - served and died in the Fourth Anglo-Ashanti War. In November 1895 he persuaded Queen Victoria to allow him to serve as military secretary to the commander General Sir Francis Scott. He contracted malaria during the advance on Kumasi, and subsequently died aboard HMS Blonde off the coast of Sierra Leone in January 1896.