xxxxxPhilip, son of Charles V, inherited the Netherlands from his father in 1555. Determined to stamp out the growth of Protestantism there, he began the systematic killing of thousands of "heretics". When this eventually led to an open rebellion, he appointed the Duke of Alva as Governor in 1567. He introduced a reign of terror via his "Council of Blood", but the mass killings only served to widen the insurrection. Even Catholics joined the revolt in protest against heavy taxation, and by 1573 Philip was faced with a war of independence. Alva was summoned back to Spain, and the Council of Blood was abolished, but the persecution continued. As we shall see, in 1581 the seven provinces in the north, all members of the Union of Utrecht, made their first attempt to throw off Spanish rule.

Alva: detail from portrait by the Netherlandish painter Antonis Mor (1519-1575), 1549. Cartoon: based on an engraving published in the Netherlands in 1572, artist unknown. Map (Netherlands): licensed under Creative Commons. User:Moyogo – en.wikipedia.com. Count of Egmont; pencil drawing from the 16th century Collection of Arras, a series of portraits of important people, compiled by the French artist Jacques le Boucq (c1520-1573) – Municipal Library, Arras, France. 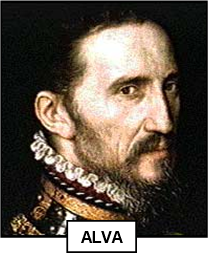 xxxxxAs we have seen, Emperor Charles V, who had inherited the Netherlands from his father in 1506, handed over this territory to his son, Philip II, in 1555. In general, the Emperor's rule had been a benevolent one - he himself had been born in Ghent - but with the coming of Philip II all this was to change. As king of Spain, he had very little interest in the Netherlands, but, at the same time, he was determined to stamp out the growth of Protestantism, then gaining an ever increasing hold in the north of the territory. Here a well-organised Calvinist Church had been set up and was openly challenging Roman Catholicism. Philip went in with both feet. He banned Protestantism and, using the Inquisition as a method of control, began the systematic killing of thousands 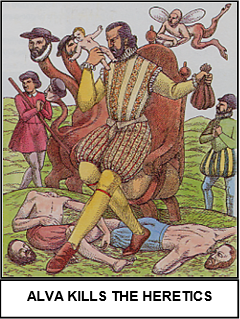 of "heretics". Protests by leading nobles, such as William I of Orange and the general and statesman the Count of Egmont, went unheeded. In 1566 open rebellion broke out, and many Catholic churches were attacked.

xxxxxTo meet this new threat, in 1567 Philip sent an army of 10,000 men to the Netherlands under the command of the Duke of Alva, a competent soldier who had served Charles V well in Tunisia, and Philip with distinction in Italy. Maintaining his reputation for cruelty, he instituted a reign of terror by means of his Council of Troubles, which came to be known as the "Council of Blood". This body condemned and executed thousands of people - the highest estimate is 18,000 - and confiscated their land. Among the victims was the popular leader the Count of Egmont, beheaded in 1568. Then in December of that year Alva defeated the Flemish forces in open battle and entered Brussels. 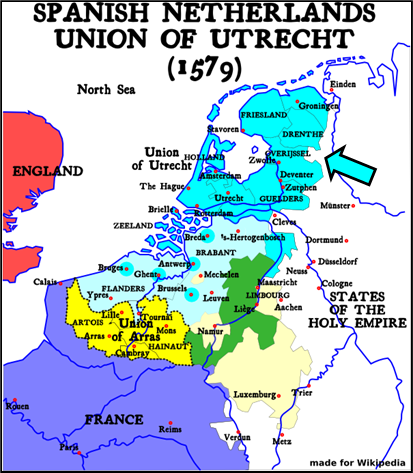 xxxxxSuch was the growing intensity of the opposition to his draconian rule that by 1572 there was widespread insurrection throughout the country. And by now many Catholics were adding their support as a protest against a 10% sales tax Alva had introduced, known popularly as the "Tenth Penny". Thus in the space of a few years his policies had turned a rebellion into a war of independence. By 1573 Philip II had realised his mistake. Alva was summoned back to Spain, to be employed more successfully a few years later during the Spanish conquest of Portugal.

xxxxxFollowing his departure, the "Council of Blood" was abolished, but the killing continued. In 1576, for example, the Spanish wreaked their fury on Antwerp, burning, looting and slaughtering some 8,000 of the city's inhabitants. In response, leaders of the Catholic south and the Protestant north attempted to unite by signing the Pacification of Ghent, but their differences proved too great, not only on religious grounds, and the understanding collapsed three years later. As we shall see, in 1581 seven provinces in the north (arrowed on map), all members of the Union of Utrecht of 1579, declared their independence from Spain, but it was to be many years before there was to be any hope of a lasting settlement for the Protestant north, let alone the Catholic south.

xxxxxIncidentally, the execution of the Flemish general and statesman the Count of Egmont (1522-1568), a victim of the "Council of Blood", inspired both writer and composer. The German dramatist Johann Wolfgang von Goethe used incidents in his life as a basis for his tragedy Egmont, written in 1788, and the German composer Ludwig van Beethoven wrote incidental music for this play, together with the Egmont Overture in 1810.