THE ALMORAVIDS CONQUER THE

xxxxxThe Almoravids, a nomadic people with a fanatical belief in Islam, came to power after crossing the Sahara in about 1076 and conquering the ancient and wealthy Kingdom of Ghana. Then, having made a firm base in Morocco, they moved into Spain, aiming to take over and extend the Arab territory there. As we shall see they made a promising start in 1086. 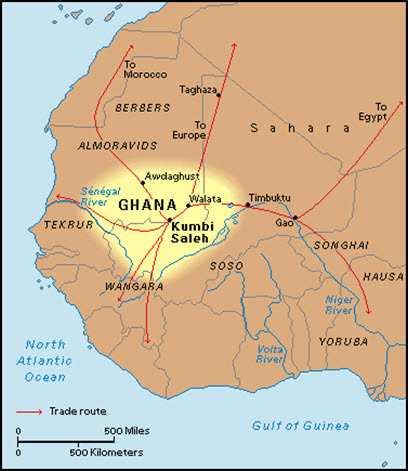 xxxxxThe Almoravids originated from Senegal and, moving into North Africa founded their capital at Marrakesh in about 1068. From here they controlled the area of Morocco as far north as Algiers. A tough, nomadic people with a fanatical belief in Islam, they crossed the Sahara in about 1076 and overrunning the ancient Kingdom of Ghana, gained enormous wealth by grabbing the kingdom's gold supplies and its lucrative trade routes passing through Timbuktu.

xxxxxThe Kingdom of Ghana, the first of the great empires of West Africa, reached the height of its power in the 10th and 11th century, deriving much of its wealth from gold mines discovered in the south and its control of the caravan routes which crossed the Sahara, trading in a variety of goods, notably salt. The kingdom continued to exist after the invasion of the Almorav 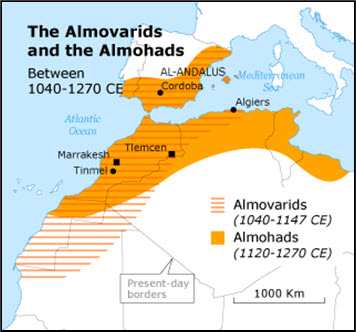 ids, but it was no longer of any real importance and was overthrown by a neighbouring tribe, the Susu, in 1203 (JO).

xxxxxAs we shall see, in 1086 the Almoravids, having established themselves firmly in Morocco, crossed over into Spain to assist the Moors - then under pressure from the Christians - and soon began to take control of the Muslim areas. Their first major victory was at the Battle of Zalaca where they defeated the Christian army led by Alphonso VI of Leon and Castile. The fight by the Spanish to rid Spain of its Arab invaders was to be a long haul.