xxxxxAs we have seen, the Triple Alliance of 1882 between Germany, Austria-Hungary and Italy isolated both France and Russia. Both were anxious to seek support against the Central European bloc. Despite their differences a military agreement was reached in 1894 against the Triple Alliance, ensuring that, in the event of a war, Germany would be forced to fight on two fronts. At the same time, Britain feared the colonial ambitions of the German Kaiser, Wilhelm II, and his aim to build a large navy. Abandoning its policy of isolationism, the British government - despite its long-standing enmity towards France and the recent Fashoda Incident of 1898 (which almost led to war) - agreed to a friendly agreement with France in 1904, known as the Entente Cordiale. Colonial disputes were settled and this paved the way for military cooperation in the event of a war. Three years later Britain also settled its differences with Russia, and this led to the formation of the Triple Entente - France, Russia and Britain. By 1907 Europe was divided into two armed camps, each suspicious of the motives of the other. War seemed inevitable and proved to be so. The assassination of the heir to the Austro-Hungarian throne in June 1914 sparked off the First World War, and brought death and destruction to many parts of the continent.

xxxxxAs we have seen, the Triple Alliance of 1882 between Germany, Austria-Hungary and Italy - the product of a new balance of power emerging in Europe - had split the continent down the middle and left both Russia and France in a dangerous, isolated position. The Russians saw this pact as a threat to their pro-Slavic movement in the Balkans - if not a direct threat to the Russian state itself! -, whilst the French, humiliated by their defeat at the hands of the Germans in the Franco-Prussian War of 1870, equally felt the need for an ally. Only then would France have any hope of regaining its prestige as a nation and, given time, of recovering its border provinces of Alsace and Lorraine.

xxxxxThe possibility of some sort of alliance between these two nations, the French Third Republic and the Russian Empire, in order to counterbalance the Triple Alliance, seemed highly unlikely on paper. France was a nation of revolutionary, liberal ideals, whilst Russia was an absolute, ultra conservative monarchy. Yet despite these very marked political differences, necessity proved the mother of compromise. From the late 1880s onwards France began to supply Russia with cheap loans floated on the Paris Bourse - enabling Tsar Alexander III to replenish his depleted army - and, to offer at the same time a certain amount of military assistance. And a closer 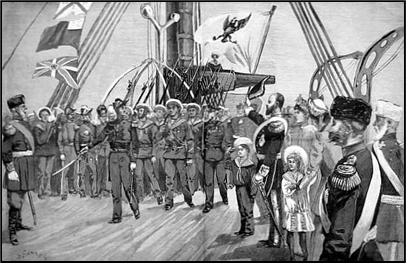 friendship then followed. In 1890 the German Kaiser, Wilhelm II, withdrew the Reinsurance Treaty which Bismarck had drawn up with Tsar in 1887 - made, in fact, to prevent him from allying with France! - and Russia felt even more vulnerable. By way of support, in 1891 the French gave financial assistance to a number of Russian projects, including the building of the Trans-Siberian railway (begun that year), and there was a series of diplomatic exchanges, including a visit by the French Fleet to the Russian naval base at Kronstadt, welcomed warmly by the Tsar himself (illustrated).

xxxxxThe following year, after a deal of negotiation, a military convention was drawn up between the two nations, and this finally became operative in January 1894 after the Tsar had added his signature. Significantly, it was committed to remain in being so long as the Triple Alliance existed. By its terms, Russia would come to the aid of France if she were attacked by Germany (or by Italy if supported by Germany), and France would come to the aid of Russia if she were attacked by Germany (or by Austria-Hungary if supported by Germany). Furthermore, mobilization of one of the Triple Alliance powers would trigger off immediate mobilization by both France and Russia, thereby ensuring that Germany would have to fight on two fronts should it come to blows. 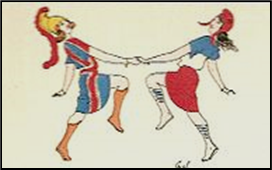 xxxxxThe precise military nature of this alliance made it abundantly clear - if clarity were needed - that Europe was now divided into two armed camps, with each wary and fearful of the other. And a few years later this division became the more marked with the signing of the Entente Cordiale, a “friendly understanding” between the United Kingdom and France. For centuries Great Britain, an island state with a powerful navy, had been able to isolate itself from the affairs of continental Europe, only taking part in a conflict at the time and place of its own choosing - and 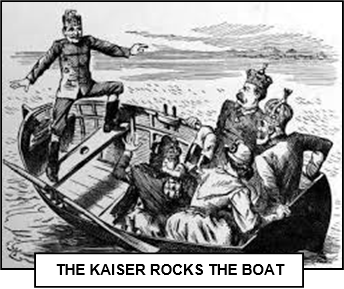 generally to its own advantage. But this all changed with the departure from office of Chancellor Bismarck in 1890, and the introduction of a more adventurous foreign policy by the new Kaiser. Plans were set in motion for commercial and colonial expansion, together with the building of a large navy to provide the necessary support. The British government, already concerned and somewhat humiliated over the difficulties its army had encountered during the Second Anglo-Boer War (1899-1902), was alarmed by the prospect of an ambitious Germany - already the dominant power on the continent - threatening to undermine her colonies and challenge her supremacy on the high seas. An ally or two were required on the European mainland to keep the Triple Alliance in check.

xxxxxFrom the historical point of view, the prospects of a rapprochement between Britain and France were not high. They were traditional enemies of long standing, and in recent years the enmity between them had been heightened by a number of colonial disputes in Africa and elsewhere. Nonetheless, as early as March 1881, following the renewed alliance between Germany and Austria-Hungary (the virtual remnant of the Three Emperors’ League), the heir to the British throne, Edward, a man who had a particular liking for the French way of life, had met with the French statesman Léon Gambetta to discuss the possibility of an alliance against Germany. Talks on the matter, however, were informal and infrequent, and any hope of such a rapprochement was dashed with the coming of the Fashoda Incident in 1898, a crisis which brought Britain and France to the brink of war. After this, indeed, there was a series of talks between Britain and Germany. The two countries had both dynastic and cultural ties, and there was talk of Britain actually joining the Triple Alliance. These discussions continued until 1901. 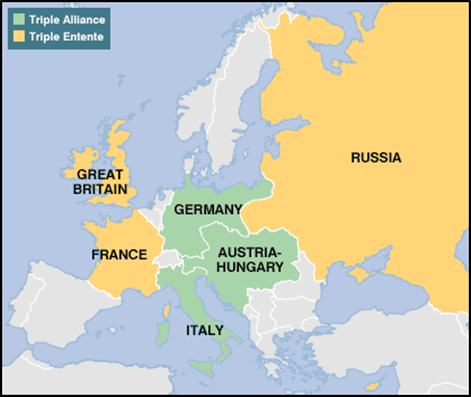 xxxxxAt the same time, however, the French government was making its own approach to the British. In 1898, anxious to isolate Germany at all costs and to create a credible bulwark against the Triple Alliance, the new French foreign minister Théophile Delcassé opened negotiations with the British government. Assisted in his task by the United Kingdom’s deep concern about the rising threat of German imperialism, and, in 1901, by the succession of Edward VII, a decided Francophile, the discussions went particularly well. Even the Fashoda Incident, having been settled peacefully, showed that, despite their differences, the two countries could work together to meet the needs of a changing world.

xxxxxIn 1904 the two countries - once described as “natural and necessary enemies” - reached a friendly understanding known as the Entente Cordiale. It was not a formal alliance, but it settled a number of colonial disputes in North Africa, Newfoundland and the Far East regarding spheres of influence and trading rights, and it paved the way for military cooperation when the war clouds began to gather. 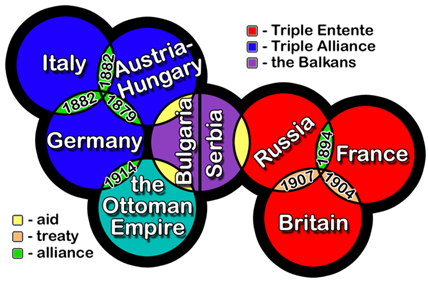 xxxxxThree years later - putting aside their differences (notably in Persia, Afghanistan and Tibet), the British and Russians forged their own entente, and this became part of the Triple Entente of 1907 (see map above). The alliance of these three powers - seemingly unimaginable just a few years earlier - completed the new political map of Europe. Two armed camps, the Triple Alliance and the Triple Entente, now confronted each other, each with aims to achieve and scores to settle. War was becoming to be seen as inevitable and so it proved to be. Among the number of trouble spots which divided the two blocs was the Balkans, and it was here in June 1914 that the assassination of Franz Ferdinand, heir to the Austro-Hungarian throne, sparked off the First World War, bringing years of death and destruction to many parts of the continent.

xxxxxIncidentally, when the French fleet visited Kronstadt in 1891, welcomed by the Tsar himself, the French national anthem, La Marseillaise, was played in Russia for the first time. Up to then it had been banned! ……

xxxxx…… The three nations of the Triple Entente had worked together some years earlier during the Greek War of Independence, beginning in 1821 (G4). As we have seen, all three sent a naval force to Greece and defeated a combined Turko-Egyptian fleet at the Battle of Navarino in 1827. However, that alignment was short-lived, forged only to meet a particular need of the time.