xxxxxAs we have seen, the Almohads overthrew the Almoravids in Morocco in 1147 (ST), capturing their capital, Marrakesh, and taking over their kingdom. From 1150 they began to extend their rule over the whole of the Arab territory in Spain. It was at this time that Alfonso VIII, King of Castile, began his rule, and he spent his entire reign fighting the Moors. In 1194 he went on the offensive and invaded the province of Seville, but his Christian army was soundly defeated near the fortress of Alarcos in 1196. As we shall see, many years were to pass before he managed to reap his revenge in 1212 (JO). 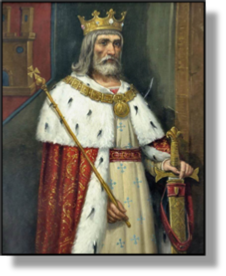 xxxxxThe Almohads, a fanatical religious community, was formed in 1124 by Muhammad Ibn Tumart, a Berber from Morocco. By 1145 their forces felt strong enough to attack the Almoravids, a Berber dynasty which, at that time, held sway not only in north-west Africa but also in Muslim Spain on the European mainland. In 1147 (ST) they conquered Marrakesh, the capital city and power base of the Almoravids, and went on to gain control of vast tracts of Morocco and Algeria. Then from 1150, fearing that the Muslim hold on Spain was in danger of collapse, they began extending their rule over the whole of the Moorish territory on the Iberian peninsula.

xxxxxTo this period belongs Alfonso VIII, King of Castile. He came to power in 1169 and spent his entire reign resisting the Moorish invaders. His constant attacks proved of no avail against the fanatical Almohads, but in 1194 he took the bold step of i 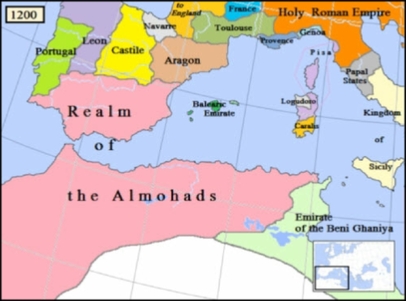 nvading the province of Seville, an incursion which brought an immediate response from the Almohad caliph Abu Ya'qub Yusuf. He set out from Marrakesh with a large expeditionary force and in 1195 met up with Alfonso’s forces near the fortress of Alarcos. In the battle that ensued in 1196 the Christian forces were soundly beaten and Alfonso and the remnants of his army fled to Toledo. Abu Ya'qub Yusuf entered Seville in triumph while his forces roamed at will across the kingdom of Castile.

xxxxxAs we shall see, it was not until 1212 (JO) that Alfonso was able to take his revenge for the humiliating defeat suffered at the Battle of Alarcos.