xxxxxIt was in 1139 (ST) that Afonso Henriques secured the independence of Portugal and, as we have seen, this was strengthened by the Treaty of Windsor, an alliance with England, in 1386. This enabled Henry the Navigator to embark on a programme of exploration. However, with the death of Henry the Cardinal King in 1580, putting an end to the Aviz dynasty, the major claimant to the throne, Philip II of Spain, invaded Portugal and gained control of the country by the Battle of Alcantara, near Lisbon. There followed the “Sixty Years’ Captivity”. Portuguese revolts in 1634 and 1637 failed, but in 1640 the Spanish were finally forced out. But it was not until 1668 (C2), by the Treaty of Lisbon, that Spain finally recognised Portugal’s independence.

xxxxxAs we have seen, it was in 1139 (ST) that Afonso Henriques, having defeated his mother at the battle of Sao Mamede and seized power, secured the independence of Portugal from the neighbouring Kingdom of Leon and assumed the title of King. By the time of his death in 1185 he had firmly established the new nation state. It was left to Afonso III to expel the Moors from the areas south of the Tagus, a task achieved by 1250. There followed a series of wars with the kingdom of Castile, but in 1385 John I defeated the Castilians at the Battle of Aljubarrota and, forming an alliance with England by the Treaty of Windsor (1386 R2), finally secured a period of peace. This enabled his son, Henry the Navigator, to embark on a programme of exploration which was to take the Portuguese along the west and east coasts of Africa, open the sea route to India and the East Indies, establish settlements in distant Brazil, and pioneer the slave trade from Africa to the New World. 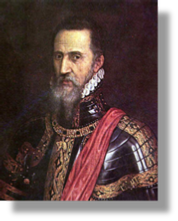 xxxxxWith the death of Henry the Cardinal King in 1580, however, the Aviz dynasty came to an end and no less than seven claimants disputed the succession. With Philip II of Spain as one of these claimants, the outcome was hardly in doubt. In August, Spanish forces under the command of the ruthless Duke of Alva (illustrated), invaded Portugal and defeated the supporters of Don Antonio at the Battle of Alcantara near Lisbon. Philip II was proclaimed king (as Philip I) and, at a stroke, Spain doubled her colonial empire and gained valuable harbours along the Atlantic seaboard.

xxxxxThere followed what came to be known as the "Sixty Years' Captivity". Under Philip's successors, Portugal became little more than a Spanish province. The lucrative trade with the East Indies was lost to the Dutch and English, parts of Brazil fell into Dutch hands, and the country was heavily taxed to help pay for Spain's defence of the Netherlands and its military designs upon England. In 1589 a large English expedition led by Sir Francis Drake and Sir John Norris attempted to place Dona Antonio on the Portuguese throne, but it failed to take Lisbon, and had to be abandoned. Widespread discontent against Spanish rule finally erupted, however, in 1634 and 1637. These uprisings proved unsuccessful, but in 1640 a national revolution, aided by the English, expelled the Spanish, and the Portuguese monarchy was restored. But, as we shall see, the war spluttered on, and it was not until the Treaty of Lisbon of 1668 (C2) that Spain finally recognised the country's regained independence.

xxxxxThe Spanish conquest of Portugal in 1580 (arrowed on map below), increasing as it did Spain's power and prestige throughout the world, greatly alarmed the rest of Europe, though, in fact, the potential it offered was hardly realised. As a result, both France and England gave increased support to the Dutch rebels within the Spanish Netherlands, seeing this as a means of engaging the "enemy" and confining his activities. As for Philip II, the next ten years or so was to see a decline, not an increase, in the might and majesty of Europe's most powerful state. 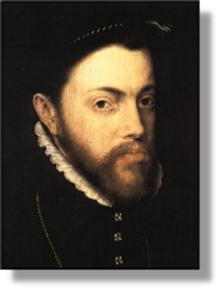 xxxxAs we have seen, Philip II (1527-1598) became the Habsburg king of Spain and its colonial possessions in 1556 (M1), following the abdication of his father, Emperor Charles V. By this time he was already in control of the Netherlands, the Duchy of Milan, and the kingdoms of Naples and Sicily. Furthermore, by his marriage to Queen Mary in 1554, he had a strong say in the government of England, until recently a Protestant country. Then in 1564 a Spanish force landed on the islands now known as the Philippines, (named after their king). By 1572 the Spanish had gained control of the archipelago and established Manila as their administrative centre. Such, then, was the size of Philip's empire even before the Battle of Alcantara and the conquest of Portugal in 1580, with its colonial possessions and extensive trading network!

xxxxxPhilip’s reign began well with two decisive victories over the French, one at Saint Quentin in 1557, and the other at Gravelines the following year. These battles brought an end to a war which had raged on for some sixty years. By the Treaty of Cateau-Cambrésis in 1559 much of the territory which had been taken by France in the Low Countries and Italy was returned to Spain. (It was this peace 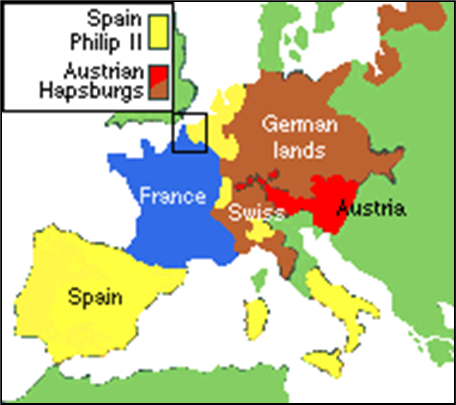 settlement, by the way, which confirmed England's surrender of Calais to the French). And later, too, in 1571, a naval force under the command of Philip's half brother, Don John of Austria, won a resounding victory over the Ottoman fleet at the Battle of Lepanto, thus removing for a time the almost constant threat posed by the Ottoman Turks in the eastern Mediterranean.

xxxxxBut it was a vast empire to control, and Philip was not really the man for the job. As an ardent Roman Catholic, the champion of the Counter Reformation, he was totally intolerant, seeing the Inquisition and the sword as the only means of solving the religious divide. As a result he drove the Dutch into a war of independence which occupied the cream of his army for over thirty years, and in 1588 he attempted an invasion of England which ended in the humiliating defeat of his "invincible" Armada. And within two years of this disaster he was again at war with France, supporting the Catholic forces of the Holy League in a costly and inconclusive war against Henry IV and his Protestants.

xxxxxHe fared somewhat better nearer home. He completed the work of unification begun by the monarchs Ferdinand and Isabella, and he prevented the growth of heresy in Spain and in his Italian possessions. However, his oppressive treatment of the Moriscos (those Muslims who had converted to Christianity) led to a bloody revolt in Granada in 1568, and the consequent expulsion of the Moorish population. Then in 1591 he was faced with a widespread rising amongst the Aragonese in defence of their local liberties.

xxxxxBut the greatest danger to the state was the ever-growing financial crisis. Philip inherited a massive debt and this, together with the enormous cost of his wars - particularly the on-going struggle against the Dutch - brought the country to the brink of bankruptcy. (In 1570, for example, the governor of the Netherlands had no money with which to pay his troops). Even the large import of silver from the New World proved insufficient to meet the costs involved, whilst the fluctuations in its supply only served to undermine and debase the coinage. Following the defeat of the Spanish Armada in 1588 the country's power and prestige went into a slow but relentless decline.

xxxxxPhilip's method of government did not help. He was hard-working and well-intentioned, but, on the advice of his father, he trusted no one. As one courtier aptly put it, "His smile and dagger were very close". Thus he ruled alone, either in Madrid or at the Escorial, his giant monastery-cum-palace just outside the capital. Here he poured long and hard over reports and accounts from his far-flung dominions and then, more often than not, deferred the making of the vital decisions they clearly required. When he died at the Escorial in 1598 his vast empire still appeared to be at the height of its power, but, in fact, it was beginning to fall apart at the seams.

xxxxxPhilip II (1527-1598) was already in possession of the Netherlands, the Duchy of Milan, and the kingdoms of Naples and Sicily when, on the death of Charles V in 1556 (M1), he inherited the kingdom of Spain and all its colonial possessions. In addition, as husband of Queen Mary he had a strong say in the affairs of England, and by the Battle of Alcantara in 1580 he gained control of Portugal. In the early part of his reign, he reclaimed lost land following victories over the French, and soundly defeated the Ottomans at the naval Battle of Lepanto in 1571, but his empire proved too vast for one man to control. An ardent and intolerant Roman Catholic, he drove the Dutch into a war of independence, and in 1588 his Armada totally failed in its attempt to invade England and restore papal authority. And within two years of this disaster he was at war with the French again, fighting against their Protestant king Henry IV. Meanwhile, in Spain itself he faced a Moorish rebellion in the south and, later, a rising by the Aragonese. But the greatest danger to his empire came from an ever growing financial crisis. The large debt he had inherited, plus the cost of his own wars and the fluctuating and diminishing supply of silver from the New World, served to debase the coinage. Spain’s power and prestige were on the decline. When Philip died in 1598 his empire still appeared to be a force to be reckoned with but, in fact, it was beginning to fall apart at the seams. 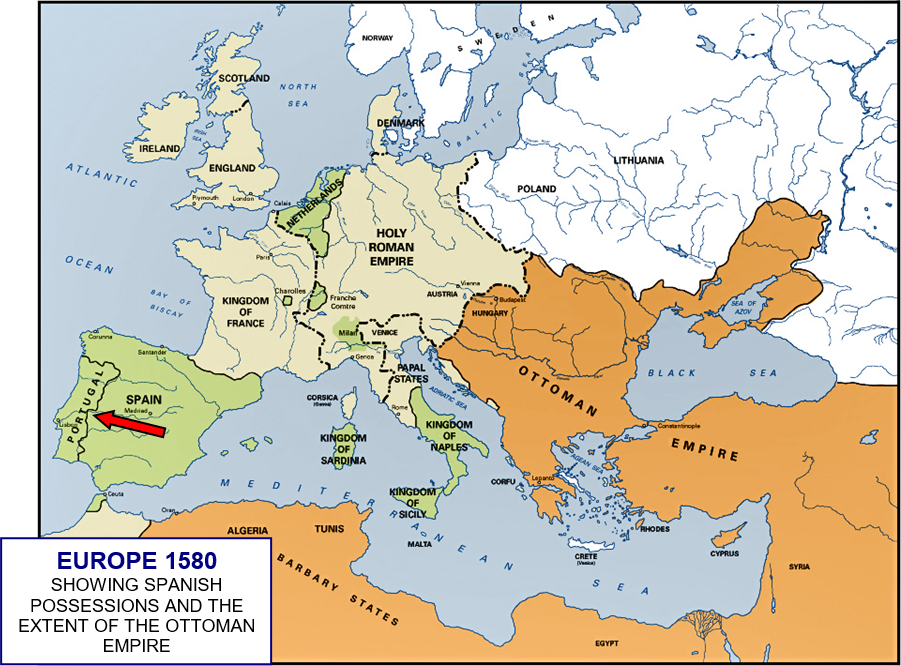